As the ground battle goes on in Gaza, students at Birmingham’s N.E. Miles Jewish Day School gathered to show their support of a Day School alumnus who is in the middle of the fight. 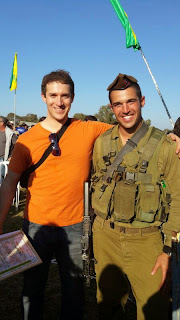 Corporal Asaf Stein, 29, is a member of the Golani Brigade. Born in Israel, he grew up in Birmingham and earned his doctorate in biomedicine from the University of Alabama at Birmingham. Then he moved to Israel and joined the Israel Defense Forces. (Photo, left, courtesy IDF)

“A lot of people ask me why a 29-year-old man would join the IDF,” Asaf said recently on the IDF blog. “I tell them I just wanted immigrate to Israel and join the army. They understand me.”

The son of Susan and Michael Stein, Asaf was home earlier this month for what was to a three-week visit, but his trip was cut short by the callup. He spoke to the Friends of the Israel Defense Forces at The Temple in Atlanta on July 10, then had to return to Israel the next morning.

Susan Stein is a teacher at the Day School, and the students have rallied around the family.

This evening, a quickly-assembled group of Day School students assembled at the Bais Ariel Chabad Center to draw posters showing support for the Steins. Though it is the middle of the summer and many students are away, about two dozen came on a moment’s notice.

Michael Duvdevani said the evening was to “send a message to the Stein family that we as a community stand with them and support them.”

Asaf is what is referred to as a Lone Soldier, someone who serves in the IDF but who does not have any family in Israel. Lone Soldiers are paired with Israeli families for support, but for the soldier’s family abroad, there is no social structure supporting them emotionally as there is in Israel.

Duvdevani and Oren Azrad, a former Olympics swimmer for Israel now living in Birmingham, coordinated the event. Duvdevani explained that the evening was one of three initiatives that started this week. He set up a WhatsApp group, “Birmingham Supports Asaf.” He made Asaf a member of the group, though he will not see any of the messages until he returns from Gaza.

Duvdevani also said that many reservists were called up with no notice, so they had no time to prepare or bring anything. He started a fundraiser yesterday that would go toward buying essentials for the soldiers — toiletries, shampoo, underwear, socks — and by this evening $4500 had been contributed.

The donations were being put to immediate use. He said a friend in Israel was fronting funds so he could bring the supplies to soldiers tomorrow, and Duvdevani would reimburse him with the funds raised. They would be presented in the name of Chabad of Alabama, he said.

In 2008, Asaf was a counselor at a children’s camp in Nitzana through the Jewish Agency. That camp was established for children from Sderot and other communities near the border with Gaza, who have dealt with years of rocket threats and dashing to bomb shelters.

At the time, he told the Birmingham Jewish Federation “I am grateful I was able to participate in a program aimed at giving these children a break from constant danger, and showing them that they are not alone; and, that the rest of Israel and Jews from all over the world will support them.”

He volunteered in Israel in 2009, and decided to stop just visiting, setting a goal of becoming a soldier in a combat unit, though he was much older than most entering the IDF.

Through persistence, last July he was accepted into the Golani Brigade, one of 100 accepted out of 350 candidates. He told Israel Hayom that in a meeting with two high-ranking army commanders, they said that only four men close to his age had ever been selected to combat units. “So I’ll be the fifth,” he responded.

Ever since Asaf joined the IDF, the Birmingham Jewish community has been supporting its home-grown soldier.

After the students and parents finished making posters of support at Chabad, the group drove to the Stein house to show their support.

With all of the students on the porch, Duvdevani told the Steins “we are all thinking about you, thinking about Asaf… we’re so proud of what Asaf is doing.”

Susan Stein said what they needed most is “prayers and good wishes.”

Afterward, she said they last heard from Asaf on Wednesday morning, when he told them that he was given three minutes to talk, and then the military would be taking his phone until he returns.

“I’m going to be gone for a few days,” she recalled him saying. “We’re just praying” and getting very little sleep.

Michael Stein showed a photo of his son with a large rifle, which he said generally is given to the taller soldiers. Because he was so good at navigation, that is his current role, so he and a partner are out in front guiding fellow soldiers.

It is a tense time for soldiers’ families, with Israel trying to find and expose the smuggling tunnels used to hide armaments, protect Hamas leaders and infiltrate Israel. The tunnel entrances are generally hidden in civilian areas, and it is estimated that the tunnel network cost hundreds of millions of dollars to construct.

Early Sunday morning, 13 members of the Golani were killed in the Hamas stronghold of Shejaiya, from where a large proportion of missiles had been launched at Israel. One of the casualties was Sean Carmeli, a Lone Soldier from South Padre Island, Tex.

Carmeli was buried in Haifa. With his parents on the way from Texas, the Maccabi Haifa soccer team put out a call to support the Lone Soldier by attending his funeral; the turnout was estimated at 18,000. 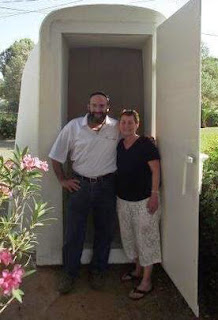 For Duvdevani, the current conflict also hits home. He grew up on Moshav Talmei Yosef, a couple of miles from the Gaza border. His parents and brother still live there. While there has been the threat of Hamas missiles for years, he noted that the moshav was the “second line” of communities from the border and somewhat removed from the infiltration threat posed by tunnels under the border.

His mother, Margaret Kartus Duvdevani, is a Birmingham native. In 2012, the Birmingham Jewish community worked with Operation Lifeshield to place a rocket shelter in the moshav.