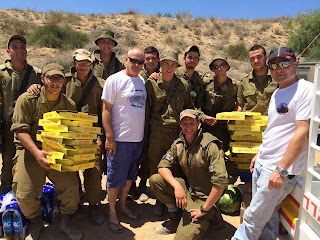 As the war in Gaza continues, Rosh Ha’Ayin is taking part in supporting the soldiers as the city also deals with numerous Code Red alerts of incoming missiles.

Danny Shani, who chairs the Rosh Ha’Ayin-New Orleans Partnership, and his friend Ziv Parwar, have made trips to visit troops in the South and deliver goods to them.

On July 22 Shani and Parwar took 1,000 pairs of socks, 1,000 cans of drinks, ice cream, snacks and cakes from a Rosh Ha’Ayin bakery to the soldiers. They visited several units and also distributed shampoo, deodorant and soap to replenish supplies.

As noted in a post to the Partnership Facebook page, “The soldiers are tired but motivated to continue to defend Israel.”

One of the soldiers commented that he never though he’d “get an ice-cold Coke here, while fighting.”

Their final stop was to the unit of a friend’s son, but he had been injured shortly before their arrival and in fact they had unknowingly seen his ambulance to Soroka Hospital in Beersheva leaving as they arrived.

After distributing goods to that unit, Shani and Parwar went to Soroka to visit the soldier, who had inhaled smoke from a fire that had broken out at their position and had respiratory tract burns. “Luckily the injury is not severe and he hoping to return soon to his friends and continue the activity,” they reported.

Previously, the pair had raised funds for a July 11 trip where they brought pizzas and drinks, along with underwear. They raised over $15,000 for that trip, including a $2,000 allocation from the Jewish Federation of Greater New Orleans and local leadership.

The food and beverages they distributed were purchased in Ofakim, a town in the southern part of Israel that has lived with incoming missiles and struggled economically due to the uncertainty. In what is likely an unintentional nod to the relationship with the Southern United States, many of the soft drinks were RC Cola.

Shani said “I was moved by the soldiers’ reactions when we got there, they ran to us happy to get the food and drinks, but you could tell they were much happier about us caring for them. The hugs we got from the soldiers were our treat.”

One of the volunteers who made the trip south noted that when he returned to Rosh Ha’Ayin there was a rocket attack. He heard the siren before he even got out of his car and dashed to his home’s shelter. “After about a minute a loud explosion sounded very close to the house.”

He started getting messages on WhatsApp, then started receiving pictures. There were sirens nearby as the fire department arrived in the area to extinguish the fire, which was not far from his house.

After 10 minutes he left the shelter. His home was not damaged and nobody in Rosh Ha’Ayin was hurt by the missile strike.

On July 17, it was reported that three Israelis were hurt that day trying to run to shelters, as well as a person in Rosh Ha’Ayin who was “hurt from panic.”

Donations for future Rosh Ha’Ayin trips to the troops are being collected online.