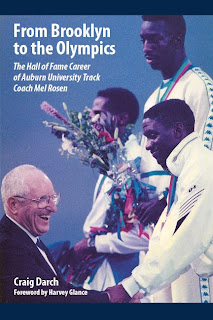 Author Craig Darch was drawn to the story of how a Jewish kid who grew up in Brooklyn during the Great Depression was able to become such an important figure at a “quintessential Southern university.”

Rosen was coach at Auburn for 28 years, and he coached the U.S. Olympics track team to a record 20 medals in the 1992 Summer Games in Barcelona. He also coached in the Maccabiah Games in Israel.

For Darch, who has previously written three textbooks, the book was a departure. Growing up in South Bend, Ind., he was in a household of sports fans and “it was always significant if there were any Jewish personalities.”

Darch, who is the Humana Foundation-Germany-Sherman Distinguished Professor in the College of Education, got his doctorate at Oregon, “the epicenter of collegiate track and field,” so when he took a position at Auburn in 1982 he had heard of Rosen. He got to know Rosen through events in the local Jewish community.

The idea of telling his story clicked early one day. Darch was running through campus at 4 a.m. when he noticed a bus waiting, ready to take one of the athletic teams to a competition. The lone figure on the bus at that point was Rosen.

“Here’s a guy in his 80s who is there before anyone else, waiting to go to the next event,” he observed.

He later asked Rosen if he’d be interested in being interviewed, and after a couple days of thought, he agreed.

Darch said Rosen’s story is “often a story not told, how the Southern communities for the most part were a great place for Jews to come. Coming from the north, sometimes you don’t expect to hear that.”

Rosen was coaching during the turbulent 1950s and 1960s. After Auburn integrated, many of the black athletes, even from other sports, gravitated toward Rosen.

While Auburn has a synagogue today, in the 1950s they imported Rabbi Eugene Blachschleger from Montgomery every so often. Rosen admitted that he came out “not so much for the rabbi but for the corned beef and pastrami.”

The book has a great deal of Jewish flavor to it, and Darch was concerned that he might have to tone it down. Instead, he has found audiences to be fascinated by descriptions of the Jewish experience in Auburn and the South.

Despite Rosen’s track and field success, he was able to bring only three Jewish athletes to Auburn — the Bresler brothers from Birmingham, and a Tel Aviv native who left Auburn after one year.

In 2006, the track at Auburn was named the Hutsell-Rosen Track. Wilbur Hutsell was Auburn’s first track head coach.

Darch will be speaking at Birmingham’s Temple Emanu-El on Aug. 15 at 5:45 p.m., and signing books at Homewood Public Library on Aug. 28 at 6:30 p.m. He and Rosen were scheduled to sign books at the Alabama Booksmith in Birmingham on Aug. 5 at 4 p.m.