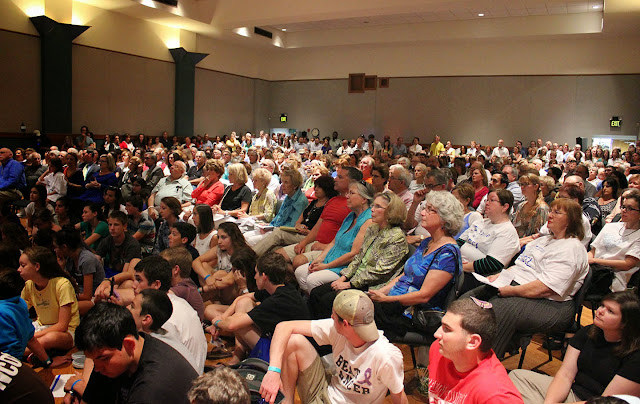 It was a standing room only crowd at the Levite Jewish Community Center on July 29 as the auditorium was packed for an Israel rally.

Daniel Odrezin, assistant executive director of the Birmingham Jewish Federation, told the crowd of about 500 that “we said Alabama was going to stand with Israel, and we meant it literally.”

The auditorium’s 275 seats were filled 20 minutes before the 6 p.m. event. About 60 youth filled the floor in front, while others ringed the walls and spilled out into the lobby.

In the lobby, Chabad had a table for men to put on tefillin, and the Federation handed out “I Stand With Israel” T-shirts. Falafel dinners were sold as a fundraiser to send pizza to Israeli soldiers.

The evening was for coming together and expressing support for Israel as thousands of missiles have been fired from Gaza toward Israeli cities in the last three weeks, and Israeli troops are in Gaza trying to root out the missile launchers and expose tunnels Hamas built for smuggling weapons and infiltrating Israel.

A common theme throughout the night was how Israel builds defenses for its citizens while Hamas uses its citizens as human shields to protect its offensive weapons. Many speakers spoke of how the defeat of Hamas would also be beneficial for the Palestinians.

“All Israel wants is sustained peace and quiet,” Odrezin noted, “something Hamas could easily deliver if they were interested in ending the conflict.”

Were it not for the Iron Dome defense system, he added, Hamas would have been highly successful.

Consul General Opher Aviran, from Israel’s Consulate in Atlanta, was the keynote speaker. He thanked the Jewish and Christian communities for their support.

Aviran said the conflict was not one Israel chose, but Hamas continues to take actions that extend it. Now, he said, “Israel will continue until the terror threat is eliminated” through disarming Hamas and destroying the terror tunnels. Thus far, Israel has uncovered 31 tunnels with dozens of access points close to communities in Israel. Recently, it was revealed that Hamas was planning a Sept. 11-style attack on Israel for this coming Rosh Hashanah, sending groups of 10 to 20 operatives each, dressed in IDF uniforms, through dozens of tunnels into Israel to infiltrate border towns and start killing as many Israelis as possible.

“Both Israel and the Palestinians deserve peace and security,” Aviran said. To that end, there can be “no ceasefire without demilitarization of Gaza. No way.”

The conflict has illustrated a sharp contrast, Aviran noted. “We cherish life. We are not a culture of death… The good guys are us and the Palestinian moderates. The bad is Hamas.”

He concluded by asking the audience to join him in proclaiming “Enough is enough!”

A range of Jewish and Christian speakers expressed their support and the local connections to Israel as the war in Gaza continues. For some it was deeply personal.

Michael Duvdevani, who was born in Birmingham but grew up on a moshav near the border with Gaza, spoke of his brother, Daniel, and Asaf Stein, who grew up in Birmingham. Both are currently serving in Gaza. “We have two Birmingham boys fighting in this fight, protecting our homeland,” he said.

Duvdevani said when he was growing up there was relative peace and quiet, but in recent years his family has been subjected to random rockets from Gaza, “aimed to kill as many civilians as possible. This is an impossible reality.”

When his family receives an alert that a rocket has been fired, they have 15 seconds to get to a shelter.

Duvdevani said when his brother was called up, he wanted to go to Israel and do something. From the front, Daniel told him that he had never seen so many soldiers in his life, and Michael could do more for Israel by staying home and rallying support.

The previous morning, Duvdevani heard from Asaf, who was out of Gaza for 24 hours. “He is doing well.”

Duvdevani spoke to Asaf’s commander, who said that when they emerged from Gaza, they saw all of the gift packages, food and cards sent from communities around the world. “He said it was the first time since the operation started that he wept,” which was a common reaction. They could feel how the Gaza operation was uniting the Jewish community’s resolve. 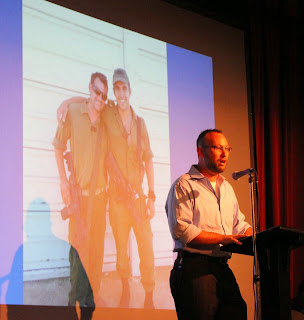 Asaf also told Duvdevani, who has a pedorthic clinic, that their military-issued boots are falling apart in Gaza and he wanted to raise money for orthopedic comfort boots that were better suited for their mission. “It took me one phone call to one member of this community who said I will do it, and he did it. Within two days the soldiers will have new boots on the ground in Gaza.”

As Duvdevani spoke, behind him was a photo of Asaf and Daniel, who ran into each other in a staging area just before going in to Gaza.

Rabbi Yossi Posner of Bais Ariel Chabad Center echoed the theme of unity. He had been in Israel a couple of weeks ago, and saw a “magic moment of unity” when Hamas started launching rockets.

Noting that Tisha B’Av, the most tragic day on the calendar, was a week away, he spoke of the teaching that the Second Temple was destroyed almost 2,000 years ago because of discord within the Jewish community.

“When Hamas launched missiles over Tel Aviv, Jerusalem, Ramat Gan and Rishon,” he said, “we realized that we are all the same, and the differences we tend to pay attention to like religious and non-religious, right or left, are only semantics. Beneath it all there is the thread that unites us all as one big Jewish family.”

He mentioned Asaf and Daniel’s efforts, and led the crowd in “Oseh Shalom.”

Many of the speakers were Christian friends of Israel. “We are so thankful to have these wonderful friends. Christian support of Israel is so important at this time,” said Samantha Dubrinsky, who works with area Christians for the Federation.

A last-minute addition to the program was Gen. Charles Krulak, president of Birmingham-Southern and a former member of the Joint Chiefs of Staff.

He noted the presence of a delegation of campers from Ramah Darom, who are traveling through Alabama on a civil rights tour. They were scheduled to be in Montgomery but decided to remain in Birmingham for the rally.

The retired U.S. Marines General told them “you should be very proud of the people of your age who are on the front lines.” He noted that they are engaged in “the worst battle in modern warfare. Nothing is more dangerous, nothing is more frightening” than battling in an urban area against foes who do not have a uniform to identify them.

Krulak, who had worked with members of the IDF, came to the rally because of “a deep, abiding and passionate love and respect for the state of Israel.” He noted “this is not a battle Israel asked for, but with us standing behind the Israelis, it will be a battle Israel ends.”

Jahan Berns said “Growing up in Uganda, I never could have imagined being in Birmingham, Alabama, standing up to speak at a Jewish Community Center.”

Born a Muslim, Berns converted to Christianity as a teen and immigrated to the United States. ‘God has led me to this beautiful moment and I am so grateful,” she said.

“I very well know the intractable radical Muslim mentality that has led to the growth of groups like ISIS, Al Qaida, the Iranian nuclear regime, Hezbollah and yes, Hamas. I believe with every fiber in my being that it is my duty as a Christian — and now as an American — to support Israel as Israel defends herself,” she said, then recited Psalm 27.

Rev. John Killian, president of the Alabama Baptist State Convention and pastor of Maytown Baptist Church, spoke of God’s promise to Abraham and said “My friends, I wish to be on God’s side, so tonight I proudly stand with Israel.”

State Rep. Anthony Johnson gave a passionate condemnation “of the acts of aggression and violence against my Jewish brothers and sisters in Israel and around the world.”

Jimmy Filler spoke for the Federation’s Israel emergency campaign, which has raised over $400,000. He noted that there are factions in the Middle East who are not interested in peace, “They only want to murder Jews.” And if they succeed in doing that, “every Christian is next on the block.”

Another theme of the night was how much it meant to the troops to know that they were not fighting the battle alone. Duvdevani said before the evening was over, photos of the crowd would be shared among the troops around Gaza.

Knesseth Israel Rabbi Eytan Yammer, who during the rally was flying back from Israel, had a video presentation about his week visiting soldiers and their families. He said he always told them “I’m here because the Jews of Birmingham love you.”

After the rally, the teens from Ramah Darom congregated by the U.S. and Israel flags in front of the LJCC and sang another rendition of “Oseh Shalom” — “He who establishes peace.”