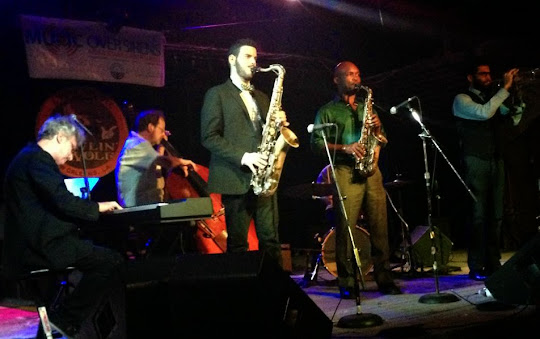 In a city known for music, it is only fitting that instead of a traditional rally to stand with Israel, a musical evening was held.

The Jewish Federation of Greater New Orleans held “Music Over Sirens” on July 29, drawing over 125 to a benefit concert at the Howlin’ Wolf.

Morris Bart emceed the event, saying “Music sounds so much better than sirens or silence. So it is with Israeli and New Orleans musicians that we want to spend this special evening together.”

Michael Weil said the war “is personal. It affects every Israeli. There is always someone you know who has been killed or wounded and every family member has someone called up now,” and there are family members from New Orleans serving.

Weil reminded the crowd that Gaza has not been occupied since Israel withdrew in 2005. Since then, “Hamas has spent $1.2 billion on rockets and tunnels. Each tunnel costs $2 million to construct. Imagine what hospitals, schools, parks and shelters could have been built with that money.”

Bart spoke of his first visit to Sderot, the town that has been in Hamas crosshairs for years. When his group arrived, they were told about the 15-second warning they get when a rocket is fired from Gaza. They were told to wear running shoes at all times and constantly look around to know where the nearest shelter is.

While there were no sirens during his visit, he said it was easy to discern the level of tension they had to live with on a daily basis.

A moment of silence was held for those on both sides who have been killed. “We mourn all the children, all those that have died in this unnecessary war,” Weil said.

Bart asked the crowd to say prayers “for all those that have lost their lives in the conflict and the many wounded; whether Israeli or Arab, Jew or Muslim.”

Bart was so enthused by the crowd that he said he was matching dollar for dollar what was raised that night. The event had raised $9,571 from donations at the door.

Proceeds will go to the national Federation “Stop the Sirens” campaign, and to Kibbutz Kfar Gaza to rebuild a playground that was destroyed by Hamas rocket fire.

The national campaign provides respite summer camps for children, special programs for the aged and infirm, as well as trauma counseling.

Bart said Kibbutz Kfar Gaza is less than a mile from the Gaza border and has been under constant rocket fire. “All the children, students, foreign workers and older people have been evacuated to safety in the North. No one is working the fields and they are fearful for the next rocket and especially from an attack by an underground tunnel.”

Bart read a letter from Tzachi Levy, a Kfar Gaza resident who described what life has been like for the last 10 years of rocket attacks. “Some homes and buildings have been destroyed. People have been injured and there have even been a few deaths. But we learned to live with that constant threat and overcome it.”

Levy thanked New Orleans for “your support and your love. And especially how you bring your music to overcome in this war.”

Richard Neff closed out the evening by talking about the similarities between New Orleans and Partnership2Gether community Rosh Ha’Ayin, which is known as Israel’s city of music.

The Israeli artists for the benefit were brought in by the Israeli Consulate in Houston. The local musicians donated their time, and Howie Kaplan of Howlin’ Wolf donated the venue space, so all of the proceeds go to the special campaign.

A table was set up to design cards or send letters to Kfar Gaza or to Israeli soldiers. The Jewish Community Day School is coordinating a “New Orleans Children’s Letters to Israel Campaign” and will continue sending batches of letters as long as they come in. 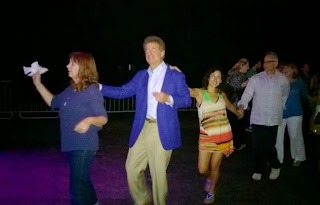 The Federation is planning a phone-a-thon for the emergency campaign in the coming week.

(Left: Morris Bart leads a Second Line of “Down By The Riverside.”)