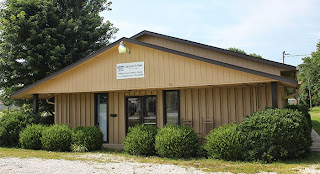 Congregation Etz Chayim in Bentonville closed this “starter” building last month and meets at an area church while planning for its next building.

While many small-town congregations struggle as their memberships age, a Jewish community continues to grow in northwest Arkansas.

Congregation Etz Chayim in Bentonville, Ark., is celebrating its 10th anniversary this month after closing its building and taking down the mezuzahs. But for this congregation, that’s a good thing.

Michelle Malashock, immediate past president of Etz Chayim, said when the congregation bought its previous location in 2005, “they never thought we would be here this long.”

On July 27, congregants took down the mezuzahs and the Eternal Light and said Shehecheyanu “as a nod to new possibilities.” Many of the religious items have been put into storage temporarily.

Susan Abrahams, the congregation’s treasurer, said it was “a great starter home” but “we have outgrown it and we are ready for the next.”

The tipping point, they said, came last August when it poured all night. Malashock had a “sinking feeling” knowing that the building was lower than the surrounding area, and sure enough she got a call that “it’s water everywhere” in the building.

With Rosh Hashanah fast approaching, “we had a wonderful offer to move for the High Holy Days,” and though the building wasn’t completely unusable, concern that another rainstorm could happen closer to the holiday without a backup plan in place led the congregation to accept the offer.

That temporary arrangement with First Christian Church to use their Waterway location has “formed into a long-term relationship,” Abrahams said. The church is located in what was originally intended to be a stable for a horse-themed development, and is set up in an informal setting for coffeehouse-style services.

Etz Chayim works with the church on many initiatives, Abrahams added. “They had what we would call Mitzvah week, and we participated in that,” and the congregation donates to several of their initiatives.

With a temporary home, Etz Chayim was able to list their property and start thinking about their next building. They did have an offer earlier this year but rejected it because it was not in line with what the congregation needed. With the July 27 ceremony done, it is now on the market again.

Malashock said the new building will likely be flexible in its design and available for other religious groups to use.

The growth of Bentonville’s Jewish community came with the explosive growth of the Bentonville area as a whole, due to one factor with its roots on the town square, in a building with the words “Walton’s 5-10” on the front.

That storefront is now a museum about the history of Wal-Mart. In recent years, vendors and suppliers have opened up shop there, bringing an incredibly diverse population to the area, and many newcomers have been Jewish.

Initially, the handful of Jews traveled half an hour south to Fayetteville for services, but soon figured that there were enough to support their own congregation.

In the summer of 2004, a group of 15 families established CEC, as they call it. Soon there were 35 families involved, and the numbers continued to climb.

Etz Chayim services started at the Bentonville Boys and Girls Club. In 2005 they converted a former Assembly of God church into a synagogue, and welcomed representatives of the Baptist, Catholic, Muslim and Hindu communities to the dedication.

Malashock said Bentonville “has totally embraced us. Everyone is so interested in what we do.”

The congregation has not affiliated with a particular movement because of a diversity under its roof. Some members keep kosher while others come to services once a year. Since 2006, Rabbi Jack Zanerhaft has traveled from Tulsa once a month to serve the congregation.

After it opened, Etz Chayim received numerous items from small-town Arkansas congregations that were disappearing. The state’s Jewish population is currently estimated at 1,725.

Many items were contributed from Temple Beth El in Helena, which closed in 2006. Beth Israel in El Dorado gave them a Torah, which they later found out had originally been brought to Camden, Ark., by the Feibelman family in 1938 as they fled their hometown in southwestern Germany. They took their congregation’s Torah with them before the 400-year-old congregation was destroyed.

The Torah and ark are now housed at Waterway.

Malashock explained that there is a lot of turnover, because many executives are sent to Bentonville for just a couple of years, then they transfer away. The congregation currently has about 55 families, and that number is starting to increase as more people elect to stay long-term.

But the new congregational board is mostly people who have arrived in the last couple of years. Only one board member has been around since the beginning.

Malashock is from Kansas City, Abrahams came to Arkansas from Atlanta.

With a young-skewing congregation, Etz Chayim has far more Bar Mitzvahs than funerals. The 30 students in the religious school make it the second largest in the state.

That was one of the problems with the old building — there were two small classrooms. Just before the flood, a closet at the entrance was being converted into a third, even smaller classroom.

As part of the long-term building plan, Etz Chayim is embarking on a campaign called ReJEWvenate Bentonville. The goal is both to raise money for a new building and to raise engagement and activity within the community.

The 10th anniversary celebration will be on Aug. 22 at 6 p.m. at Avondale Gardens. The Shabbat dinner will be catered by Kosmos Greek restaurant, and many founders who have since moved on to other communities will attend. Malashock said it was scheduled so local members would be back because school will have started, but former members along the East Coast could travel because school has not yet started for them.