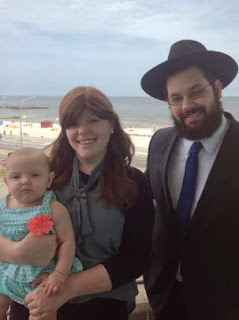 And then there was one.

With Rabbi Akiva and Hannah Hall moving to the Mississippi Coast this month to set up Chabad of Southern Mississippi, South Dakota is the only state in the country without a Chabad presence.

What makes this move even more unusual is that Hall will not need a map to find his way around — he went to high school in Ocean Springs.

Hall, who was raised by a Jewish mother and non-Jewish father, said his family was always Jewishly active and connected to the community. While visiting relatives in Las Vegas, he attended Camp Gan Israel at Chabad there. “That was my first exposure to a full Torah lifestyle, and I really took to it,” he said.

Around his Bar Mitzvah age, the family became close with Rabbi Mendel Rivkin of Chabad in New Orleans. “After I finished public high school, I was looking to go to a yeshiva,” Hall said.

While in high school, he started observing Shabbat and keeping kosher, making weekly trips to stay with the Rivkins over Shabbat. In 2007, at age 18, he coordinated what was considered Mississippi’s first public Chanukah menorah lighting ceremony, attended by Gulfport Mayor Brent Warr. The ceremony has been repeated in recent years, and he and Rivkin have also visited the Fort Polk Army Base on Chanukah.

Hall said his family has been supportive of him. His father, Ron, is the regional director of guest experience at MGM Resorts International. His mother, Lara, was active in theater and died in 2009 at the age of 41, she was buried at the Beth Israel cemetery in Biloxi.

Just as Hall was finishing up his rabbinic degree, he was introduced to Hannah Black, who had grown up in another small Jewish community: Bakersfield, Calif., where her family belonged to a Reform congregation. After Chabad opened there when she was 10, the family became more involved and she started attending a Jewish school in Los Angeles at age 14.

They were married in the fall of 2012. The Rivkins and several others with New Orleans connections attended the wedding in Los Angeles. After the wedding, the Halls lived in Crown Heights before becoming Judaic teachers for a family in an area of California where there was no such opportunity.

As the Halls were finishing up their commitment in California they started looking at different options. Rivkin told him that there was an opportunity to start a Chabad House in Mississippi, “and you have a background in the area.”

“The idea of going on shlichus,” becoming a Chabad emissary, “wasn’t necessarily something I had in mind,” he said. But he figured if he didn’t take it, it might be a while before someone else did, “so it was our responsibility to accept it.”

He added, “we felt that we had been given an opportunity and a mission that was unique to us, and couldn’t decline such a responsibility.”

The Mississippi center will be linked with Chabad of Louisiana, but will be autonomous.

Hall’s base will be the Gulf Coast because that is the area he is most familiar with, but he hopes to branch out to places like Hattiesburg and Jackson. Biloxi is also a tourist area, and there are numerous Jews serving at Keesler Air Force Base.

They are moving the first week of September, and likely will have a Sukkot event as their formal introduction to the community. They plan to renew old friendships and network in the community to establish relationships.

They plan to have people over for Shabbat dinner and lunch, but are not anticipating holding services or a minyan right away.
“People are loyal to their synagogues,” Hall said. “We’re not coming there to compete or offer the same programs” as Beth Israel in Gulfport.

He plans to supplement “what is already there” and offer a resident rabbinic presence that has not been in the area before. He said the likely offerings will be adult education and Torah learning, while also providing outreach to the unaffiliated and to tourists.

He said the opportunity “to bring Jewish people close to Torah and chassidus is quite remarkable. In addition, my family still lives there, which will allow us to spend much more time with them than we were able to in the last few years.”

Rivkin said “We are excited about this unique opportunity the the Halls have. We believe that they will do a great job working with the existing Jewish presence and the people of the Gulf Coast Jewish community.”