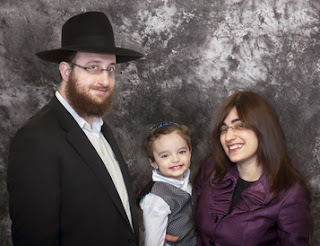 Rabbi Yosef and Bina Goldwasser are setting up Chabad of Mobile this month after visiting the community earlier this year. While there have been several visits to Mobile by traveling Chabad rabbis, Goldwasser said Rabbi Yossi Posner from Chabad of Alabama in Birmingham was interested in seeing someone move there.

Goldwasser hopes to open a Chabad House that “should be a home where every Jewish person could feel welcome regardless of their background or affiliation,” he said.

Goldwasser visited Mobile for Chanukah and met with many people in the community. They “were very positive” about it, he said. He went back a couple of moths later and led a class on Chassidism, and held a Purim party.

They are moving to Mobile from Crown Heights with their two-year-old son, Menachem Mendel. A “Meet Chabad barbecue” is scheduled for Sept. 7 at 4:30 p.m., at 288 Mayflower Street.

Goldwasser was a Day School student in his native Pittsburgh, then went on to yeshiva in New York and France. Bina Goldwasser was raised in North Miami Beach, then attended high school in Chicago and women’s seminary in Tzfat. She has worked in Jewish day camps in four states.

They plan to provide classes, community events, Shabbat and holiday meals and other services to the community.

Mobile’s Jewish community numbers roughly 1,200. Goldwasser said he has already met with the Mobile Area Jewish Federation leadership and Rabbi Steven Silberman of Ahavas Chesed. He also said that in his visits he met with many who are not currently affiliated in the community.

He is eager to expand the availability of kosher foods in the area, and will be working with Rabbi Yeshayahu Tenenboim from Chabad of the Emerald Coast in Destin.

“We are excited to fulfill our life’s dream by putting our skills, passion for Judaism and love of people into serving the spiritual needs of the Jews in Mobile with innovative, fun, and informative Jewish programming with a personal touch,” Goldwasser said.

Their one question for Mobile is “what can we do for y’all?”