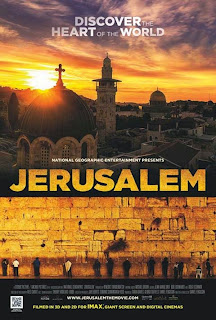 The National Geographic IMAX film “Jerusalem” that has been screening at Birmingham’s McWane Center this summer opens at the Gulf Coast Exploreum Science Center in Mobile on Sept. 13.

In Mobile, the movie will be accompanied by two complementary exhibits and there will be a lecture series.

Daniel Ferguson, who produced, directed and wrote the film, will visit for a grand opening on Sept. 16. After a screening he will discuss the film’s creation and purpose.

Complementing the film will be “Cultural Artifacts of the Holy Land” and “Families of Abraham.”

The artifacts exhibit will include over 50 items from the original settlement of Jerusalem through the 20th century. They will be on loan from the New Orleans Baptist Theological Ceremony.

“Families of Abraham” is a contemporary photography exhibit of 180 pictures by eight photographers showing the lives of 11 Jewish, Christian and Muslim families over the course of a year. It was created by curator Eleanor Brawley, with assistance from the Levine Museum of the New South, Charlotte, N.C.

A five-part lecture series will showcase a variety of topics ranging from everyday culture to significant archeological discoveries throughout history. The series will feature local and regional scholars, as well as archeological experts, who will unveil historical and cultural topics as they relate to the exhibit. John B. Switzer, Bill Warren and Dennis Cole are the featured speakers, presenting a series of topics from November 2014 through March 2015.

“We are pleased to have the opportunity to host such an exciting film and exhibit combination here on the Gulf Coast. This experience is something we feel will shed light on a very historic and cultural significant area of the world,” said Exploreum Executive Director Jan McKay.

The 45-minute National Geographic film will be shown on the IMAX dome screen, giving one a bird’s eye view of Jerusalem, with a perspective that is new even to those who have been there numerous times.

The film traces Jerusalem’s story from the Jebusites, who inhabited the site 5000 years ago, through the Jewish, Christian and Muslim periods. The story is told through three young women, one of each faith, detailing what Jerusalem means to them and their respective religions. In the film, their stories intertwine but rarely intersect.

The Mobile Area Jewish Federation is hosting a community screening on Oct. 12 at 4 p.m., and reservations can be made by calling the Federation office. The screening is “a gift to the community,” and contributions to support the Federation’s work in Ukraine and Israel are requested.

The film and exhibits will be in Mobile through April 4. In Birmingham, the McWane Center run continues through Nov. 26.