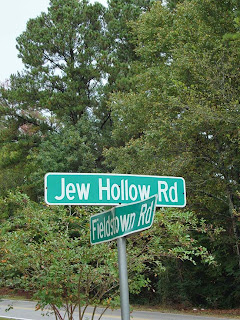 Editor’s Note: This was originally published in October 2010, but an al.com feature on odd street names in Alabama this week prompted us to post it online.

The city of Gardendale, located about 10 miles north of Birmingham, has among its amenities a large municipal soccer complex, located at the intersection of Fieldstown Road and Jew Hollow Road.

The story behind the name can be found in the history of coal mining in north Jefferson County.

The Pratt Coal and Coke Company was formed in 1878, and would establish mines in numerous locations surrounding Birmingham, eventually being bought by TCI. One of the mining camps, at Mineral Springs, was named Jew Hollow Mining Camp.

A mining camp was a small company town. This one reportedly had a depot, post office, skating rink, commissary and dry goods store, a community center and small houses that the miners would rent from the company.

Many Jewish merchants in the area started out in mining towns. In Parrish, another nearby town in mining country, one can see a neighborhood with the street names Engle, Nichols, Cohn, Goldstein and Levine.

Blankenship said she got the information from Thelma Minyard, who is now deceased, when she was working on a booklet on the history of Mineral Springs School.

According to the school’s website, the school was established by the Pratt Coal Mining Company for the education of miners’ children and other children in the area, and the first location was in Jew Hollow.

After the mines were tapped out around 1920, the mining company moved some miners to Brookside and others to the Republic Mines. The county assumed control of the school, moving the students to a new building in 1922 that was used until the school was closed in 1972. The original Jew Hollow building was torn down and some of the lumber used for the Hand family home, which still stands in Fieldstown.

Another Jew Hollow connected to a mining camp is in Prenter, W.Va.

Also in Gardendale, just off New Castle Road, is Jew Hill Road. In that case, the store on that road reportedly was run by Syrians, but people apparently thought they were Jews because of their darker complexion, thus the name.