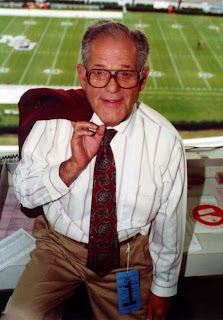 Jacob Sanford “Jack” Cristil, the legendary voice of Mississippi State University athletics, died on Sept. 7 at the age of 88.

“As a lifelong Bulldog, my heart is heavy at learning of the passing of legendary MSU broadcaster Jack Cristil,” said MSU President Mark E. Keenum. “Jack’s deep love of this university was always evident in his words and in his deeds. He was a tireless ambassador for Mississippi State and he brought great honor and distinction to our university as one of the most revered radio announcers in American history.”

When he retired in 2011 because of health concerns, his 58 years as the radio broadcaster for Mississippi State was the second-longest in the nation. He announced his retirement in the post-game show following the basketball team’s 84-82 loss to LSU, saying his medical treatments would not permit him to represent the university “the way it should be represented.”

He was known for his on-air quips, especially in games where the Bulldogs were being trounced. Victories were hailed with his signature “You can wrap this one in maroon and white.”

Cristil’s love for broadcasting came at an early age.

The son of Jewish immigrants from Russia, Cristil noted years ago that his parents spoke Russian, Hebrew and Yiddish but allowed only English to be spoken in the house. His mother was a Russian revolutionary who escaped the czar’s forces.

When he was six years old, his parents bought the family’s first radio and he discovered sports broadcasting. The idea that he could be sitting at home in Memphis and hear someone in a stadium far away telling him about a game “enthralled” him and he knew that would be the path he would eventually take.

He started bouncing a ball in the street outside his home and doing play-by-play of imaginary games.

After graduating high school, he served in World War II, as an aircraft engine mechanic in the U.S. Army Air Corps.

He then briefly studied broadcast journalism at the University of Minnesota before returning to Tennessee and starting as the radio announcer for the minor league baseball team in Jackson, Tenn. He would announce baseball for teams in Anniston, Memphis and Clarksdale, joking that he worked his way up to Double-A baseball.

While in Clarksdale he sent audition tapes to then-Mississippi State Director of Athletics C.R. “Dudy” Noble, having never been to Starkville. His announcing career for the Bulldogs began with a 34-6 win over then-Memphis State in his Tennessee birthplace on Sept. 19, 1953.

In all, Cristil delivered game descriptions to Mississippi State fans across the Magnolia State and around the world for more than 1,500 collegiate contests.

“Jack Cristil connected with generations of Bulldog fans and remains an icon for all who love the Maroon and White,” MSU Director of Athletics Scott Stricklin said. “No school’s broadcaster was as synonymous with their institution as Jack Cristil was with Mississippi State. Jack’s passing leaves a large void, but I think all Mississippians appreciated his dedication and talent, and Jack will always be the Voice of the Bulldogs.”

Cristil was most recently presented the Lindsey Nelson Award, given annually to the nation’s premier sports broadcaster. He was honored with the prestigious College Football Foundation Chris Schenkel Award in 1997 for excellence in college sports broadcasting. Nelson and Schenkel were longtime national award-winning broadcasters.

In a tribute to Cristil on the Senate floor in 2011, Sen. Thad Cochran noted that the university’s basketball team ignored an unwritten state rule in the 1963 NCAA men’s basketball tournament, which forbade any state university team from playing integrated teams. The team snuck out of town in the middle of the night to play Loyola in Michigan. “This was a significant blow to segregationist sentiment in Mississippi. Jack was right there with the team as it defied its own Governor to help move our State forward,” Cochran noted.

After his retirement, Cristil participated in the production of a biography called “Jack Cristil: Voice of the MSU Bulldogs.” The book, written by MSU journalist in residence Sid Salter with a foreword by author and MSU alumnus John Grisham, sold 10,500 copies and raised over $170,000 for the Jacob S. “Jack” Cristil Scholarship in Journalism at MSU.

Earlier, Jack and Mavis Cristil had established a need-based scholarship in their name to benefit Lee County students at MSU with academic talent who needed help with tuition, books and fees.

“Jack Cristil was a courageous, tenacious man possessed of a great love for Mississippi State University,” said MSU Chief Communications Officer and Cristil’s biographer Sid Salter. “His tired body finally failed Jack, but his keen mind and that great staccato baritone voice never failed him. I count his friendship as a tremendous gift to me and to my family. We all loved him.”

It wasn’t just the broadcast field that enjoyed his vocal talents. He frequently was lay leader of Shabbat services at Temple B’nai Israel in Tupelo.

In June 2011, a stretch of U.S. Highway 82 in Starkville was named the Jack Cristil Highway, along the route he would take to Starkville from his Tupelo home.

On April 28, that home was damaged as a tornado went through Tupelo.

Cristil is survived by daughters Kay Cristil Clouatre of Baton Rouge, and Rebecca Cristil Nelson (Andrew) of Tupelo; grandchildren Jake Clouatre of Baton Rouge, and Lindsey Newhall of Tupelo. He is also survived by two sisters, Zelda Cristil Esgro of St Louis, and Miriam “Mimi” Cristil Lapides of West Palm Beach, and a number of nieces and nephews.

A public memorial service on campus will be announced.

In lieu of flowers, the Cristil family requests memorials to the Cristil Scholarships at MSU, the Girl Scouts Heart of the South or Sanctuary Hospice House.