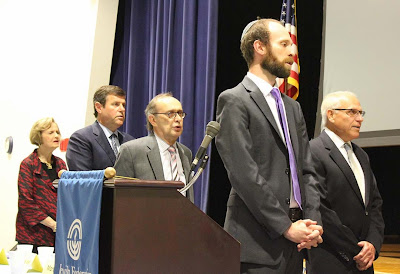 Campaign success and the definition of membership as it pertains to non-Jewish donors were two hot topics at the Jewish Federation of Greater New Orleans’ annual meeting on Sept. 16.

Held at the Uptown Jewish Community Center, the meeting drew about 150, many of whom were there to be part of the discussion on a controversial amendment to the Federation’s articles of incorporation.

The change, which would expand the definition of membership to include tightly-drawn parameters for non-Jewish members of Jewish households, was discussed but was not voted upon. Federation President Morton Katz said that with the level of discussion in the community and the need for more input, it was decided before the meeting that there would be a special meeting on Dec. 17 at the Jewish Community Campus in Metairie to vote on the proposal.

The membership article’s new wording, proposed at the meeting, was “All persons of the Jewish faith and members or former members of their households who are over the age of majority, support the mission of the (Federation), and who contribute to the Annual Campaign shall be Members” through the end of the following fiscal year.

Many in the audience had issues with the amendment’s wording, especially the definition of household, noting the wide range of households. Another possibility mentioned was someone who converts out of Judaism, and one speaker suggested the issue could lead to litigation.

The change would not open membership to donors who are not in any form of a Jewish household.

There will be further discussion to “get the wording right,” but with a requirement of advance notice to the community, that might push the vote back further.

Of the 20 Lemann-Stern Young Leadership participants, there are “three or four couples who are intermarried,” and “we have to be inclusive to those people.” That isn’t just his opinion, he noted, but of the Federation board.

Katz noted that there are many communities where the Federations have non-Jewish board members, “but this by-law change does not address that,” and there has been a lot of misinformation going around about that.

After several people raised concerns about the amendment’s wording, Temple Sinai Rabbi Edward Paul Cohn concluded that part of the meeting by thanking the board for taking on the issue.

Earlier in the evening, the Federation’s annual campaign success was celebrated, with a special presentation to co-chairs Brian Katz and Susan Good.

Morton Katz said they did “a bang-up job” and the campaign had increased to $2.7 million. There were 95 new gifts and 366 increased gifts.

Good said the success “was the work of our community,” not two people.

Part of the campaign push this year was to ask donors for an 18 percent increase. Morton Katz said the increase came after several years of campaigns in the $2.5 million range, and he hoped to see $3 million in the coming year. He noted good results in approaching the corporate community for support, and while there was some success in reaching non-Jewish donors, more can be done with additional manpower.

Good and Brian Katz presented the Anne Goldsmith Hanaw and J. Jerome Hanaw Tikkun Olam Award to Valerie Marcus and Juan Gershanik for their work on behalf of the campaign. Good noted that Marcus hosted the Lion of Judah event, for women who contribute at least $5,000 per year to the campaign.

Brian Katz said Gershanik “is always willing to do anything that is asked of him.”

Joking about his accent, Gershanik said it usually took him less than an hour to convince donors. “Of course, they didn’t understand the first 55 minutes.”

She noted that the foundation has $48 million in 450 funds, up $4 million from last year. Over $2.7 million was allocated by JEF. “We’re not a large Jewish community, yet we provide an impressive amount to our Jewish community and other organizations,” she said.

There are also $9 million in promised bequests through Create a Jewish Legacy.

Bobby Garon presented the Herbert J. and Margaret Garon Young Leadership Award to Gary Zoller. Garon said “it is uncanny how much we have in common.” Zoller “completed Lemann-Stern in 2009 and has not looked back,” Garon noted.

Zoller said he was grateful for the example his parents set for him, and is “proud with my wife to set that example again, for our child and for the future of our community.”

One emphasis is young leadership, through endowing Lemann-Stern and providing more educational content to JNOLA, and to “widen the tent” of inclusivity.

In fundraising, the Federation will work to continue widening the donor base, especially among the young. He said the Chai Society for young donors attracted 800 households.

Strategic allocation is also on the agenda, spending money more efficiently and moving away from the traditional allocation process.

The Federation will also emphasize connections with the global Jewish community. There will be an emphasis on encouraging young people to visit Israel, deepen relations with Rosh Ha’Ayin and expand ties between Israel and the greater New Orleans community.

He also announced plans for a New Orleans “mega-mission to Israel” in June 2017. “We expect every single one of you to be with us,” he said.

Guest speaker for the evening was Rabbi Brad Hirschfield of the National Jewish Center for Learning and Leadership. He noted that “saying Happy New Year is not so easy this year” given events in the Middle East and people citing the Pew Report on the state of the American Jewish community. In the last year “I heard from more people invoking the Pew study, most of whom had never read it.”

He said “there has never been a time in our 3,000-plus year history that Jews have lived in the world as we live in the United States and in Israel,” with “the power to create the world of our dreams.”

Rabbi Gabe Greenberg of Beth Israel noted that though the High Holy Days are a time when God is judging the world, “when we come together as a congregation, our prayers can tear up the divine decree.”

That teaches that “when we come together as a community, there is nothing that our collective aspirations can not accomplish, even in the divine realm.”