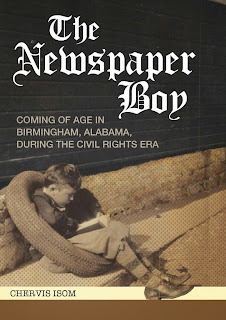 Birmingham’s Levite Jewish Community Center will have its first celebration of Jewish Book Month with a book festival, presented by the Melba and Abe Epsman Center for Creative Expression.

The festival is free and open to the public. During the festival there will be a book sale in the LJCC main lobby, and many of the books are also available through the Southern Jewish Life website.

The festival kicks off on Nov. 2 with local attorney Chervis Isom and “The Newspaper Boy.” The 2 p.m. program includes a dessert reception.

“The Newspaper Boy” is Isom’s memoir of growing up in Birmingham under Jim Crow segregation and through the civil rights era. Born in rural northwest Alabama, Isom grew up in the Norwood section of Birmingham and delivered newspapers.

He frankly states that he was a racist, because that was the culture of his time. In the book he describes his personal evolution, and Abe Berkowitz, a prominent figure in Birmingham’s Jewish community, plays a major role. Isom calls Berkowitz “the most remarkable man I have ever known.”

Isom’s evolution started by trying to win a contest at the newspaper for the delivery boy who signed up the most subscribers. He decided that the only way to win was to go through the “colored” neighborhoods, meeting blacks for the first time. He also met a Catholic family that moved to the area from the north, and they changed many of his perceptions.

He learned of Berkowitz and his courage in trying to change Birmingham’s segregationist ways from letters Berkowitz wrote to the local papers, and when Isom went to law school he tried to get a summer job with Berkowitz in 1965. In the book, he writes how it was a strange journey, from being a racist and anti-Semite to sitting in the office of “a Jewish civil rights hero.”

He didn’t get the job then, but Berkowitz hired him after graduation.

On Nov. 4 at 6:30 p.m., Keith Thomson presents his latest technothriller, “Seven Grams of Lead.” In it, journalist Russ Thornton hears from an old flame who works on Capitol Hill and wants to disclose some top-secret information, but she is gunned down in front of him — and now the killers are concerned about what he knows.

As part of his talk, he will speak about enemy intelligence posing as Mossad agents while trying to recruit American Jews.
Participants are invited to bring their own dinner or purchase one from Bo’s Kosher Café.

Auburn Professor Craig Darch will speak about his biography of retired legendary Auburn track coach Mel Rosen, “From Brooklyn to the Olympics,” on Nov. 7 at noon. Participants can bring a lunch or purchase one from Bo’s Kosher Café.

The book describes how a Jewish kid from New York wound up at Auburn, where he coached for 28 years, including seven Olympians and 143 All-Americans and guided Auburn’s track-and-field team to four consecutive Southeastern Conference indoor championships. The pinnacle of his career was coaching U.S. Olympians to a record 20 medals in Barcelona.

The book details Rosen’s coaching career during the turbulent 1950s and 1960s, and includes vignettes about Auburn sports history, Alabama history, Jews in the South, and the Olympics.

Mobile native Zoe Fishman will lead a discussion of her novel, “Saving Ruth,” on Nov. 10 at 6:30 p.m. The novel is about Ruth Wasserman, who grew up Jewish, curly-haired and plump among very blonde and Baptist classmates in Alabama. She returns home from her first year of college up north, 40 pounds lighter and in the middle of an eating disorder, but finds that things have not changed as much as she had hoped.

The book is a coming of age tale about family, misconception, race and religion in the South. Fishman said it echoes her experience of going to Boston for college, the first time she had really left home, and “that first summer home was very strange for me.”

After working in the publishing industry for 13 years in New York, she moved to Atlanta in 2011, where she is working on her next novel. She recently published “Driving Lessons” and is also author of “Balancing Acts.”

At the Nov. 10 program a pizza dinner will be available for purchase.

On Nov. 11 at 10 a.m., New York Times bestselling author Eric Litwin will visit for a program aimed at children. Litwin is author of the first four Pete the Cat books, starting with “Pete the Cat: I Love My White Shoes.” The books have been translated into seven languages and won 15 state and national awards, including a Theodor Geisel Seuss Honor Award.

Litwin, who lives in Atlanta, is also author of the new musical series The Nuts, and co-creator of The Learning Groove.

Mindy Cohen, adult and senior director at the LJCC, said they hope to attract many children and parents because public schools will be out for Veterans Day.

On Nov. 13, Birmingham attorney Barry Marks will give a poetry reading at Church Street Coffee in Crestline, starting at 6:30 p.m. A recent president of the Alabama State Poetry Society, his first book, “Possible Crocodiles,” was named Alabama Poetry Book of the Year, and his second book, “Soundling,” was a national finalist for the Eric Hoffer Grand Prize.

Marks said he likes writing poetry for people who don’t usually like poetry. Much of his work is light-hearted, but “Sounding” is about grief and recovery following the death of his daughter, Leah, who is memorialized with the Chai statue in front of the N.E. Miles Jewish Day School.

He will read selections from his new book, “Dividing by Zero,” along with pieces from his first two books.

The series concludes on Nov. 23 at 10 a.m. with an event co-sponsored by Birmingham Hadassah and the three congregational Sisterhoods. Claire Datnow, author of the historical novel “The Nine Inheritors: The Extraordinary Odyssey of a Family and Their Ancient Torah Scroll” and “Behind the Wall Garden of Apartheid: Growing Up White in Segregated South Africa” will speak, and a light breakfast will be served.

A native of South Africa, Datnow moved to the United States in 1965 when her husband got a job with NASA, and they moved to Birmingham in 1972. She writes about how historical events affect individuals and families, and her writings explore how apartheid and the Holocaust “shaped future generations in surprising and inspiring ways.”

She also has written an eco-mystery series, “The Sizzling Six.”

The Jews in Hollywood Film Series at the LJCC follows on Nov. 23 at 2 p.m. with “The Outrageous Sophie Tucker.”