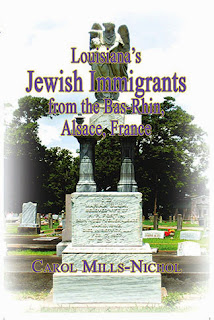 In 2012, Carol Mills-Nichol published a comprehensive history, “The Forgotten Jews of Avoyelles Parish, Louisiana.” Her new book, which just came out, is even wider in its scope.

“Louisiana’s Jewish Immigrants from the Bas-Rhin, Alsace, France” details the French Jewish immigrants who settled in 49 of Louisiana’s 64 parishes in the 19th century. Mills-Nichols gives short biographies of 638 Jewish men and women who immigrated to Louisiana between 1845 and 1915.

She begins the book with four case studies of “genealogical brick walls” researchers face and how to use on-line resources to trace genealogy.

While many of the immigrants chronicled in the book achieved great success, others met tragic ends — including murder and suicide, and roughly 7 percent of those in the book died of cholera, typhoid or yellow fever.

Many immigrants remained in the New Orleans area while others scattered to larger communities and small towns statewide. Some worked as store keepers on plantations whose names are familiar to this day.

Naturally, there are stories that involve those who wound up in neighboring states and glimpses of history from Jewish communities throughout Louisiana.

Mills-Nichols became interested in Louisiana Jewish genealogy by accident. The only child of an only child, Mills had been told while growing up that she had no relatives, so she embarked on a personal quest to learn more about her mother’s ancestors.

Born in Michigan and raised in Long Island, Mills made her first visit to her ancestral home of Avoyelles Parish in 1999. Randy DeCuir, editor of Marksville Weekly News, said to her, “You do know you are Jewish, don’t you?”

Michael Suss, whose family name would become Siess in later generations, is her third-great-grandfather, and Abraham Rich is her great-grandfather. After exploring her family, she started exploring other Jewish families in the parish, who were well-intertwined through marriage.

She spent 10 years doing research before publishing her first book. By then there was only one Jew remaining in Avoyelles Parish, but a hefty proportion of the population has Jewish ancestry.

The book is available on Amazon.