The installation of Rabbi Gabe Greenberg at Beth Israel in Metairie was a blend of the past, the future and family.

The weekend culminated in an installation ceremony and congregational fundraiser at the Audubon Tea Room on Nov. 2.

Festivities began with a Shabbat service and dinner on Oct. 31, with guest speaker Ruthie Simon, director of placement and alumni affairs for the rabbinical school at Yeshivat Chovevei Torah.

Greenberg, wife Abby and daughter Adra arrived in New Orleans during the summer. Greenberg succeeded Rabbi Uri Topolosky, who came to New Orleans in 2007 and moved to Maryland in 2013 to become rabbi of a congregation in the community where he grew up.

A native of Newton, Mass., Greenberg was a “lifer” at Camp Ramah of New England, and his grandfather was a long-time pulpit rabbi.

He was on the track team at Wesleyan University, which he said has a reputation of being the most God-less in the country, but he kept pursuing opportunities to study Judaism and seek leadership roles.

He decided to study at a yeshiva for one year in Israel, but that turned into three, after which he returned to the U.S. and entered Yeshivat Chovevei Torah.

He became active in environmental concerns, especially their relationship to Judaism. He founded and ran the Kayam Farm Kollel outside Baltimore, where he met Abby.

While in rabbinical school, Greenberg served congregations in Norwich, Conn., and Berkeley, Calif. He was also the first rabbinic intern at the Hillel of the New School in New York.

Upon ordination he became rabbi and senior Jewish educator at Hillel at the University of California at Berkeley.

When Beth Israel started looking for a successor to Topolosky, Simon mentioned Greenberg to Bradley Bain, who chaired the installation weekend. Bain reached out to Greenberg “unofficially while he was at Hillel.”

Bain noted, “He hadn’t thrown his hat into the ring, we had just heard that he was a young, dynamic rabbi and that he would be a great fit for the community.” Then Bain discovered that Greenberg’s wife was from Houston, had family in New Orleans and had attended Tulane.

“What was supposed to be a five minute call turned into an over an hour conversation,” Bain said.

Greenberg had a contract with Hillel through the summer of 2014, but Beth Israel was hoping to hire a rabbi to start during the summer of 2013. The committee tried to convince Greenberg to go ahead and apply, even promising that his moving truck would not be broken into as had happened the year before when he moved to California, but he insisted on fulfilling his commitment to Hillel.

That “really frustrated but also impressed the committee,” Bain noted. As interviews continued, Bain said they brought in an “incredible selection of candidates… but in the back of everyone’s mind, they were just no Gabe Greenberg.”

They brought in Greenberg for an official weekend, but as his daughter had just been born his wife did not accompany him. Bain gave “a perspective of how impressed we were” with him because they decided to offer him the position “not knowing the whole package.”

And, he said, Beth Israel hired him “knowing they would not be here for a full year.”

Greenberg did come in for several weekends during the interim year, and this summer when he arrived for good, he was put into action immediately. Bain said he officiated a funeral, an unveiling and a bris, “all the weekend before his contract officially started.”

Eddie Gothard, who emceed the installation, noted that Bain had been elected president of Beth Israel on Oct. 26, then the next day he and wife Daniela had their second child.

The Oct. 27 birth was an emergency C-section after a screening showed a previously-undiagnosed heart defect. On Nov. 5, the newborn underwent an eight-hour operation in Boston.

Despite more pressing concerns with the birth, Bain continued to coordinate the weekend. Gothard told Bain “I can’t express… how much you have amazed and inspired everybody you have come into contact with.”

Greenberg said one of the best aspects of being at Beth Israel for the last few months is learning the family stories in the congregation.

One such story at the installation came from Richard Stone, past chairman of the Conference of Presidents of Major American Jewish Organizations. Stone noted that “I kind of pushed myself into this event” to become one of the speakers.

He said he returned to his hometown congregation because “I have a lifelong attachment to Beth Israel,” but there was a much more personal family connection.

He explained that he left New Orleans after high school “with very strong feelings of Yiddishkeit,” which he especially developed in Bogalusa with his grandparents.

“Over the years I discovered how many great scholars in the European yeshivas ended up briefly in Bogalusa or were related to people in Bogalusa,” he said.

“We had Yiddishkeit in the air in Bogalusa,” but also “on my father’s side at Beth Israel on Carondelet Street,” and he often returned to Beth Israel, including the weekend before Katrina.

But what brought him to the installation went back to his Bogalusa days, when relatives from Houston would often visit the “family headquarters.”

As a child, Stone developed a fondness for one cousin in particular, who later died young after having three children. “One of those children, Risa, is here today. She is the mother of Abby Greenberg.”

He added, “If Beth Israel has come to Bogalusa, I gotta come back to Beth Israel one more time,” and especially for his late cousin and her descendants.

Rabbi Asher Lopatin, president of Chovevei Torah, referenced the week’s Torah portion where Abram left his ancestral home to go where God instructed. “In your lech lecha, you have come to a place steeped in tradition,” he said.

Lopatin charged Greenberg with the responsibility of working with all of the congregations and rabbis in the New Orleans area.

He called Greenberg “a standard-bearer for modern Orthodoxy, committed to our tradition and unafraid to build and rebuild for the future.”

Lopatin said “This is an incredible community for you to serve and to lead, and together to show the world that we can rebuild, we can reunite, we can pick up the pieces and move ahead stronger and more vigorous than ever.”

In introducing Allen Fagin, executive vice president of the Orthodox Union, Gothard spoke of how the OU had stood by the congregation when its building was made unusable by the flood following Hurricane Katrina in 2005.

“The OU has stood by us to provide the resources and support, without which we may not have survived, much less flourished,” he said.

Rabbi Eitan Katz, New Jersey regional director for NCSY, was at the installation and was recognized for leading over a dozen youth trips to New Orleans for service projects and rebuilding efforts through Alternative Spring Breaks.

Fagin spoke about how Judaism does not have a holiday celebrating the building of anything, but there are celebrations about rebuilding, and the strength needed to rebuild is greater than what is needed to build in the first place.

Before joining the OU staff, Fagin was chairman of the Proskauer Rose law firm.

About a decade ago Fagin was “privileged” to open an office for the firm in New Orleans. “Many people questioned what a large international law firm was doing opening an office in New Orleans,” he noted.

But “the plans we worked so hard to accomplish were subject to forces we don’t control,” because shortly after the office opened, Katrina closed it. The office was relocated to Boca Raton, Fla., after making sure every staffer was accounted for.

The firm procured condos on the beach in Florida, arranged schools for families and took care of their needs. “We had them really well set up in Florida,” Fagin said.

Not long afterward, Howard Shapiro, the person who had been running the New Orleans office, said there was a hospital and grocery store that had reopened in New Orleans, and “we all want to go back.”

Fagin praised the work of Greenberg’s predecessor, Rabbi Uri Topolosky, in the last few years. “The transition of leadership is a core value for a vibrant and forward-looking community,” Fagin noted.

In his four months in New Orleans so far, Greenberg said, “I learned quickly that the most mportant question you can be asked is what high school did you go to. I, of course, don’t have a good answer.”

Members have shown him all sorts of congregational memorabilia, including a program from a 1970s Israeli folk song sing-a-long, something “which we’re going to bring back soon.”

After a long day during his interview, even though it was almost midnight he was urged to watch the DVD of Beth Israel’s building dedication from two years ago, to better understand the congregation.

“All of theses stories, customs, traditions that these parents, grandparents and great-grandparents planted and have grown,” he wondered, “How do I tend to these trees? Our physical structure is mostly new… but what are the spiritual elements, the vision, the values planted by the progenitors of Beth Israel that we choose to make our central beam going forward?” 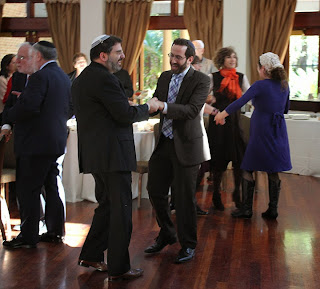 The first aspect he mentioned is “a shul community deeply devoted to Jewish education.” Every child in the shul is entitled to weekly one-on-one learning with Greenberg. “This program has been a joy for me” in getting to know the families better, and he also is emphasizing adult education.

He also mentioned love of the Jewish people and the land of Israel, encouraging learning, connection and love among Jews of different “denominations and flavors.” He noted the close relationship with Gates of Prayer, the Reform congregation next door.

He also mentioned Shabbat as “a centerpiece of Beth Israel life.”

He mentioned increasing the role of women “within the bounds of halacha” and keeping the building available for use by the greater community.

After Greenberg concluded his remarks, impromptu dancing broke out in the front of the room.

During the luncheon, artist Alex Harvie painted a portrait of the installation. The painting was raffled off at the conclusion of the luncheon.

Greenberg will be seen as part of the New Orleans community nationally in the ninth episode of “NCIS: New Orleans,” which has a Jewish theme. He is cast as — what else? — a rabbi, and part of the episode was filmed in one of the local Jewish cemeteries. Though nothing has been announced for certain, it is expected that the episode will air on Nov. 25.