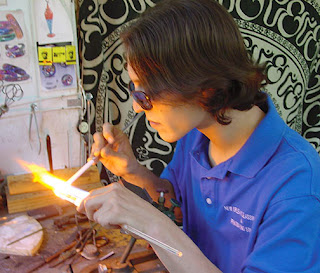 On a crisp October weekend near Tuscaloosa, amid the hundreds of artisans and self-taught artists at Kentuck displaying pottery, paintings and letterpress prints was a New Orleanian with a wide range of glass mezuzahs and Chanukah menorahs, and a couple of Torah pointers.

Judaica is a large portion of what Andrew Jackson Pollack makes in his New Orleans studio. An Atlanta native, Pollack was enamored by a visit to JazzFest and decided to move to New Orleans in 1997 to attend Loyola University.

He was already an artist in a family of artists. His mother, who did ceramics, was making glass beads when he was 12, and “I went from making beads of clay to making beads out of glass when I was 15.” Naturally, his first efforts at glass, the beads, were a natural fit in New Orleans.

He enrolled in glass blowing classes at the New Orleans School of Glassworks and Printmaking. Before long he became a member of the faculty, coordinating the lampworking department.

He has also studied at the Penland School of Crafts in North Carolina and the Corning Museum of Glass in New York, working with some of the top artists in glassmaking.

Pollack left the New Orleans School shortly before Katrina hit and established his own studio. With the flood, “we were lucky” being Uptown. An aunt and uncle lived in Lakeview by the 17th Street levee breach and had 10 feet of water in their home.

Pollack had gone to Atlanta just before the storm, and they remained there for eight months while their relatives lived in their Uptown home, until the Lakeview house was habitable. “We knew we were coming back,” he said.

Upon returning to New Orleans, he established Andrew Jackson Pollack Designs and started looking for clients and wholesale accounts, continuing “one person production but as more of a business.”

Fashioning Judaica goes back to the beginning of his artistic career. “Probably one of the first things I tried to make out of glass” was a mezuzah, he said.

He came up with a Judaica line of designs after Katrina when he began wholesaling. Though he has certain designs, “none will be the same” as he does everything new.

He does about a dozen Chanukah menorahs per year. He also does Kiddush cups, dreidels, Torah pointers and even a Seder plate. He estimates that in 20 years working with glass he has done “a couple thousand” mezuzahs.

Aside from Judaica he does sculptures, perfume bottles, candleabras, jewelry and goblets, among other items.

Currently, a lot of his work includes birds, especially Louisiana birds such as pelicans. “I really enjoy bringing out their personalities” with the glass, he said. A few years ago, fish dominated his works, as he has been a scuba diver for years.

He no longer goes the wholesale route, because “I find I can only make so much.” There are a few places he has worked with for years that carry his pieces, but “it’s hard to keep up as one artist” who makes everything as a one-of-a-kind piece.

Pollack is also a home brewer, and this month was scheduled to do a show of beer-related glassware at The Avenue Pub. He also reclaims beer bottles that have the labels etched into the bottles, turning them into drinking glasses.

His works are carried at Rhino Gallery at Canal Place, and at Dashka Roth in the Quarter. He teaches classes at YAYA Creative Glass, and goes to art festivals from Texas to Georgia. His works are also available through his website.