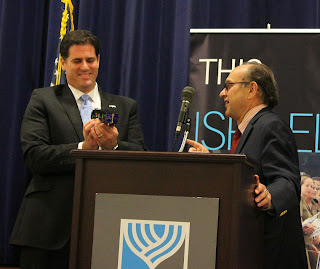 While noting the challenges Israel faces, Ambassador Ron Dermer told a New Orleans audience to stand tall and be proud that Israel will be able to overcome whatever happens.

Dermer spoke at an Israel Bonds event at the Uptown Jewish Community Center tonight. Yesterday, he met with Louisiana Governor Bobby Jindal in Baton Rouge, where Jindal hosted him and his wife for dinner and a three-hour meeting.

Jindal “is an incredible defender of Israel… with moral clarity,” Dermer said.

Before the public event, there was a private reception for Bonds supporters. Among those in attendance were Lieutenant Governor Jay Dardenne and New Orleans Mayor Mitch Landrieu.

He continued, “You already own some as taxpayers, and you have already made money.”

In June, Kennedy visited Israel for five days and said the visit convinced him that Israel is a good investment.

Dermer noted that Louisiana has purchased $18 million in Israel Bonds, and that 18 is a number of great significance in Judaism. Other significant numbers are three patriarchs, four matriarchs, 10 commandments and 12 tribes. “Once you get to 18 you pretty much have to double your investment,” Dermer said. “You get a small break at 40, but then have to go up in increments of 18.”

Dermer said the resolutions are important as “a message that Israel is not alone, and that message is heard loud and clear in Jerusalem.”

The different standard “manifests itself when Israel has to defend itself,” he noted. During the rain of missiles from Gaza this summer, Israel exhibited great restraint but was still castigated. “I want one person in this room to tell me America would use less force if 200 million were in bomb shelters and missiles were flying into New York, Chicago.” Yet Israelis are labeled as war criminals for responding.

It isn’t difficult to find out what happens in war — all one has to do is sit around the dinner table and ask, since Israel has a citizen army. “When you libel the soldiers of Israel, you libel the people of Israel,” he said.

During the summer, Dermer said he drove critics crazy by asserting that the Israel Defense Forces deserve the Nobel Peace Prize, so he stated it once again in his New Orleans talk.

Over two thirds of the resolutions by the United Nations Human Rights Commission — an oxymoron, he added — deal with Israel. He said that obsession keeps the commission from dealing with true international crises.

He spoke with a fellow ambassador from Burundi lately, who said his country had a conflict until 2004, with 300,000 killed.

Dermer said that the death toll on both sides during the entire span of the Israel-Palestinian conflict is 20,000. Yet conflicts like the one in Burundi are ignored while Israel is charged with genocide.

The Palestinian population in the territories has quadrupled since Israel captured the areas in 1967, a far cry from genocide.

Another way to compare the death toll is to note that the Nazi regime killed 10,000 Jews per day at Auschwitz in May 1944, so in two days the Nazis killed as many Jews as have died on both sides of the Israel-Palestinian conflict in 70 years.

Dermer noted that Israel is uniquely challenged among all of the nations on Earth. One can start by looking at all of the neighbors.

Syria, he said, has collapsed and is a collection of areas controlled by different groups. Lebanon is “effectively governed by Iran through its proxy, Hezbollah,” which has 100,000 rockets aimed at Israel.

Gaza has fired 20,000 rockets into Israel in recent years and is still run by Hamas. Sinai “has become a Wild West of terrorism,” though the current Egyptian government is cracking down “in ways even Mubarak didn’t.” After Mubarak was overthrown, Morsi saw the terrorists as allies, but the current ruler of Egypt sees them as an enemy.

In Judaea and Samaria, also known as the West Bank, “we are fortunate that in recent years we have not seen violence and terrorism en masse,” but it took hard work to achieve that. After Israel rooted out the terrorist infrastructure and built the security fence, terrorism was reduced dramatically.

He noted that Mahmoud Abbas, who runs the Palestinian Authority, is “not Hamas” in that he does not openly call for the destruction of Israel, but neither is he prepared to confront the killers.

Dermer mentioned last month’s attack at a synagogue in western Jerusalem. “As sick as it was to see Jews in prayer being murdered, it was no less sick to see people celebrating the attack. And they were celebrating not just in Gaza, but in Judaea and Samaria.”

He suggested that a good peace plan would be “mutually agreed neighbor swaps.” Israel would take Canada and give Syria to the United States as a neighbor. “We’re taking Mexico and you can have your pick,” he said.

He quipped that the only places willing to take him up on that type of offer are the states that border New Jersey.

Despite those challenges, Israel has only one “existential threat,” a nuclear Iran. Iran already controls the governments in Sana, Baghdad, Damascus and Beirut, and the Iranian leadership doesn’t hide its desire to wipe Israel off the map.

But Dermer said that’s not the extent of it. “They want Riyadh for breakfast, Jerusalem for lunch and New York for dinner.”

Under no circumstances should Iran be allowed to have any nuclear weapons capabilities. Despite Iranian insistence that its nuclear program is peaceful and for power generation, Dermer said that is a farce. One does not need centrifuges, enriched uranium and underground bunkers for a peaceful program.

Likewise, Iran is developing intercontinental ballistic missiles. The only use for those is to carry nuclear payloads. And they aren’t for Israel, as Iran already has missiles that can reach Israel.

Dermer was asked about the proposed Jewish nation bill before the Knesset. He said reaction to it has been “misplaced concern” and “no one in Israel will undermine Israel’s democracy.”

He invoked the saying about not watching sausage or legislation being made, saying there were several versions of the bill floating around, many with provisions that have raised alarm bells but which no Israeli government would allow to pass the Knesset.

He said Israel is a democratic state rooted in Jewish practice, and stating that Israel is a Jewish state would not alter individual rights of any citizen, regardless of religion or origin.

“Any law that will pass the Knesset will anchor the democratic character of Israel and Israel as the nation-state of the Jewish people.”

He was also asked about how to counteract anti-Israel material online and in the media. “The best antidote is the truth,” he said. “But you have to say it over and over again.”

Surveys have shown that those who follow Middle East events closely overwhelmingly back Israel. It is those who follow events superficially who are more prone to side with the Palestinians.

Despite everything, Dermer said one should step back and marvel at Israel’s accomplishments. “We defied the laws of history” by not disappearing.

Israel is a global technological power. “In cyber, Israel is China,” he said. “Israel is exporting gas to Arab countries. We also exported snow machines to Russia for the Winter Olympics.”

For 100 generations, the Jewish people dreamed about the land of Israel, now there have been three generations with “the privilege to live that dream.”

There is a responsibility to secure that dream for future generations, Dermer said, but “we will weather that storm, because we are a very strong people.”

The worst thing one can do is “bow our heads, be nervous… and refuse to walk into the arena because you might be attacked,” Dermer said. “We have to stand proud.”