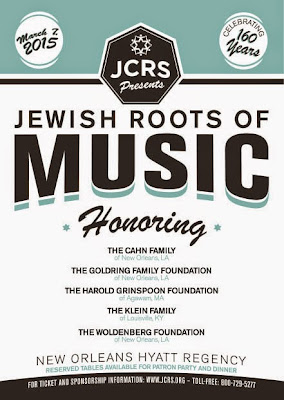 This coming year’s gala for the Jewish Children’s Regional Service will celebrate the unique agency’s 160th birthday and honor five families for their contributions and passion for Jewish youth.

The “Jewish Roots of Music” will be directed by renowned musician Harry Mayronne, who created last year’s JCRS “Jewish Roots of Broadway” production at the National World War II Museum. Mayronne’s credits include musical direction of the Big Easy Awards and co-writing and producing the off-Broadway production of “Waiting Around — The Restaurant Musical.”

The Goldring family is well-known locally, nationally and internationally for its numerous philanthropic endeavors that support many causes within the civic and Jewish communities. The Goldring Family Foundation was created by the late Stephen and Mathilde Goldring in 1957, and its vast work has continued to be carried out through their son, Bill, and grandchildren Diane Franco and Jeffrey Goldring.

Malcolm Woldenberg, a native of Montreal, with his friend Stephen Goldring, founded Magnolia Marketing Company in New Orleans in 1944. Magnolia became a leading distributer of beer, wine and liquor.

Woldenberg, who died in 1982, dedicated his later years to philanthropy that continues today through the Woldenberg Foundation, which has made major contributions to JCRS, Touro Infirmary, Tulane University, the City of New Orleans, and many cultural, civic and health related programs in Israel.

Mike Cahn, a Mississippi native, and Blanche Lazard, a New Orleanian, met and married in New Orleans in 1911. They had two sons, Emile and Jules. Their two sons, together with their spouses, Adele and June, carried on a tradition of passionate and involved philanthropy, that has now passed down to their children, New Orleanians Jimmy and Marie Cahn, and Richard and Vivian Cahn, through the Cahn Family Foundation.

Mike and Blanche Cahn were already supporters of, and mentors to, the residents of the former Jewish Children’s Home in the early part of the 20th century, when in 1936, their son, the late Emile Cahn, married Adele Karp. Adele was one of four Karp sisters raised at the Home. Today, at age 97, Adele Karp Cahn is one of the oldest and most proud surviving alumni of the Jewish Children’s Home.

Like Adele Karp Cahn and her three siblings, Elias Klein and his brother, Ike, in the 1930s, found themselves in need of assistance from the Jewish community of New Orleans and the former Jewish Children’s Home. Elias and Ike were child refugees, who were sent out of Nazi Germany by their parents, who were left behind. The community helped to place the boys with New Orleanian Lillian Greenwald, who became their foster mother.

Elias married native Beverly Aronowitz in 1948. The couple was residing in New Orleans in 1981, when a teaching position at the University of Louisville Medical School lured Elias from his position as the director of the Gulf South Research Institute. In appreciation of the support that the young Klein boys received from New Orleans Jewish institutions, Elias and Beverly have given back to New Orleans, and together with their children, have created a college scholarship fund at JCRS that supports children from refugee families.

In 1993, Harold Grinspoon a real estate developer, created a family foundation whose original mission was to support services for residents of Western Massachusetts and to support a variety of programs for various Jewish communities. Over time, both the mission of the Harold Grinspoon Foundation and the number of his own family members that he involved in the foundation has grown exponentially.

One deep passion for Grinspoon is his desire to enhance Jewish continuity, and to channel that passion through programs for Jewish youth and young families. In 2006, the Harold Grinspoon Foundation launched the PJ Library, a program that now provides free, monthly Jewish-themed books to 136,000 Jewish youth in North America. PJ has also expanded into South America, Australia, and Israel. With additional local support from the Goldring Family Foundation, JCRS administers PJ in New Orleans and across parts of six states, providing over 900 Jewish youth each year with book subscriptions.

The Grinspoon Foundation also believes strongly in the value of Jewish overnight summer camping, which is also one of the primary initiatives of JCRS. The JCamp 180 program works with over 75 camps on consulting and grant-matching.

The gala is slated to begin at 6:30 p.m. on March 7. The agency’s annual meeting will be held on March 8 at 10 a.m. at the Uptown Jewish Community Center, which is located in the spot where the Jewish Children’s Home was located.