“Our Mockingbird,” “Shell Shocked” to air on PBS World 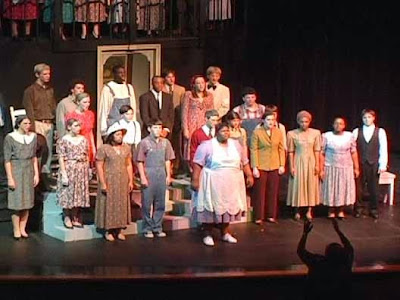 Two films with regional ties will air on the PBS documentary series “America Reframed” on the PBS World channel. The series airs on Tuesdays at 7 p.m.

Journalist Natasha Del Toro hosts the series, which presents 60 to 90 minute independent films and conversations about a range of social issues.

On Feb. 3, Sandra Jaffe’s “Our Mockingbird” will be broadcast. The film shows the collaboration of two Birmingham area schools in a production of “To Kill a Mockingbird.”

Now living in Boston, Jaffe was already planning to film a documentary about Harper Lee’s novel when she heard that Fairfield High School, which is mostly black, and mostly white Mountain Brook High School were doing a joint production of the stage version. Jaffe is an alumna of Mountain Brook, where the vast majority of students in Birmingham’s Jewish community currently attend.

Jaffe left Birmingham for college in Boston in the 1970s, where others immediately jumped to conclusions about her because of where she was from. She later rediscovered “To Kill A Mockingbird” as a reminder that “there were people ‘not all like that’ on the right side of history who would work to make things better.”

She filmed a Boston class that was doing a three-week project on the Harper Lee novel, then decided to visit Lee’s hometown of Monroeville, where since 1991 a local group has put on a stage version of the book.

The Monroeville version, done entirely by locals, begins on the lawn outside the county courthouse, then moves inside for the courtroom scenes. The 1962 film version modeled its courtroom after the Monroe County Courthouse.

The first time the Monroeville group performed outside the county was after a visit by the Israeli consul general from Atlanta in the mid-1990s. He invited them to perform at the Khan Theater in Jerusalem, where they had sold-out performances in 1996.

After seeing the play in Monroeville, Jaffe researched other venues that were doing the play. “On the Dramatic Publishing website I discovered that Mountain Brook High School was doing the play and I got in touch with Pat Yates, the drama teacher and director, who informed me about the collaboration with Fairfield. I knew that this experiment in crossing the divides of residential segregation would be something I wanted to include in my film.”

She said there are three themes to the film. First, how the novel itself still resonates “in our public discourse on race, class and justice.” Second is the view of Alabama, then and now. Third is the story of two very different schools coming together in what Yates described as “an exercise in empathy.”

The film weaves commentary from an array of notables, including U.S. Attorney General Eric Holder, journalist Katie Couric and others who reflect on the legacy of Lee’s novel and the timeless reflection of her central character, Atticus Fitch.

The documentary debuted in 2010 in Lee’s hometown of Monroeville, then was at Sidewalk Film Festival in Birmingham in 2012, and was screened as part of Birmingham’s 50th anniversary commemorations of the civil rights era in April 2013, on the 55th anniversary of the attempted Klan bombing of Temple Beth-El.

On Feb. 17, “Shell Shocked: A Documentary About Growing Up in the Murder Capital of America” will air. The film explores the high murder rate among blacks, especially teens, in New Orleans, and what individuals and groups are trying to do about it. In October 2013, Touro Synagogue hosted a community screening with director John Richie.

Richie and Jonathan Jahnke had started working with honor-roll inner-city students in New Orleans and were shocked to discover that they all had been directly affected by gun violence. The film that came from that revelation took five years for them to complete.

One segment in the film features Dana Kaplan discussing how the New Orleans youth prison system is counterproductive without positive interventions. She notes that drug violence is perpetuated because finishing school or finding work is difficult with a record.

Kaplan leads the Juvenile Justice Project of Louisiana and ran unsuccessfully for City Council in 2012.