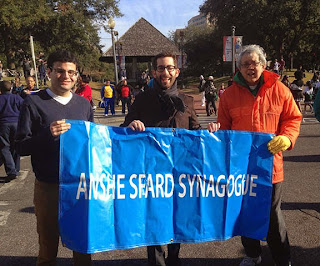 Anshe Sfard in New Orleans is doing a weekend of programming in observance of Martin Luther King Day.

The weekend will start with Shabbat services on Jan. 16 at 6:30 p.m., followed by a dinner for young Jewish professionals. The 20s and 30s congregants of First Street Peck Wesley United Methodist Church will join the young professionals for dinner.

At the 9:15 a.m. Shabbat service on Jan. 17, instead of Rabbi David Polsky giving a sermon, Rev. Martha Orphe, pastor of First Street Peck Wesley United Methodist Church, will be the guest speaker after the conclusion of services. She will speak about how the Psalms have been used in her community’s spirituality. After her presentation, there will be a buffet lunch. Some of the church’s congregants and Imam Wayne Ali Nuriddin of Masjid Bilal are also expected to attend.

On Jan. 18 there will be two panels at First Street Peck Wesley United Methodist Church. After the conclusion of First Street’s Sunday morning worship, around 12:30 p.m., the groups will assemble for lunch. Because most of the food will not be kosher, Anshe Sfard will provide some kosher selections.

Around 1 p.m., the first panel will consist of presentations by Orphe, Nuridin and Polsky about the sanctity of all human life in their respective faiths.

The second panel, “Combating Injustice Today” will start after the first presentations. The Jewish representative on the panel will be Simone Levine, Deputy Police Monitor for New Orleans Independent Police Monitor. The Christian and Muslim representatives on the panel, as well as its moderator, were not finalized as of press time. There will be a period of questions and answers afterward.

On Jan. 19, after the Martin Luther King Day Parade, the communities will work together from 1:30 to 4:30 p.m. in Central City for a service project supervised by United Saints Recovery Project. The project will be sanding, caulking, scraping and painting the double house located on 2219/2221 Baronne Street. All necessary materials and refreshments will be provided. Parking will be available at the corner of Baronne and Jackson. Everyone 13 and up is welcome and invited to participate in this project.

Touro Synagogue will also be participating in the MLK Day march on Jan. 19, as will the New Orleans Jewish Community Relations Council.

The JCRC encourages those marching in the parade to wear blue and white and to bring a banner or sign identifying the organization with whom they are marching. The JCRC will be providing transportation from the parking lot of the Home Depot on South Claiborne Avenue to the start of the parade route. Transportation will run from 8:30 a.m. to 9:30 a.m.

The parade route ends at Martin Luther King, Jr. Blvd and Claiborne, which is a short walk to Home Depot. The march begins at City Hall and goes to the King monument on South Claiborne.

The New Orleans Jewish Community Relations Council, the Rabbinic Council of Greater New Orleans, the Jewish Community Center and the Urban League will have a free, community screening of “Joachim Prinz: I Shall Not Be Silent” at the Uptown JCC on Jan. 11 at 3 p.m.

The film details the life of Rabbi Prinz, a World War II survivor who was able to leave Germany in 1937 and later became a leader in the American civil rights movement. He was president of the American Jewish Congress from 1958 to 1966, and gave a speech representing the Jewish community at the 1963 March on Washington, just before Martin Luther King’s “I Have a Dream” speech.

He then was co-founder of the Conference of Presidents of Major American Jewish Organizations.

Guest speakers will be Moon Landrieu, former mayor of New Orleans, and Norman Francis, president of Xavier University. A reception will follow the service, which is open to the community.

At Temple B’nai Sholom in Huntsville, Rev. Oscar Montgomery will speak at the 7 p.m. service on Jan. 16.

Montgomery has a doctorate in agronomy and turned down an offer from MIT to join the Department of Agriculture at Alabama A&M, figuring the students there needed him more.