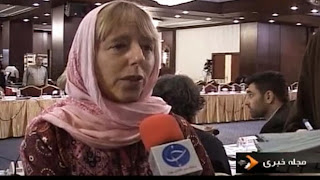 A Jan. 13 panel at the University of Alabama at Birmingham billed as two Nobel Peace Prize nominees discussing approaches to peace may not be what it seems.

The Birmingham Interfaith Human Rights Committee, which is affiliated with Birmingham Islamic Society, and the Muslim Students Association are hosting a talk at Heritage Hall at 6:30 p.m. with speakers Kathy Kelly and Medea Benjamin.

Kelly’s topic will be “The Cost of War, The Price of Peace” and Benjamin will discuss “Beheadings, Bombings and Bullets: A New Peace Movement is Urgently Needed.”

In a press release from BIS, program event coordinator Farook Chandiwala said “We are excited to have these guests in Birmingham to speak on this important topic. They are known to empower audiences to work for change.”

Benjamin is a co-founder of CODEPINK, which was formed in 2002 to oppose the war in Iraq. The group describes itself as a “women-led grassroots organization working to end U.S. wars and militarism, support peace and human rights initiatives, and redirect our tax dollars into healthcare, education, green jobs and other life-affirming programs.”

Part of CODEPINK’s advocacy is to boycott Israeli products, especially Ahava and SodaStream, and to boycott Re/Max realty because of its Israel ties. The group also seeks to defund U.S. military aid to Israel and has led several trips to Gaza.

In September, Benjamin went to Tehran as part of Iran’s New Horizon Conference, which organizers said would include “elite thinkers, philosophers, activists and politicians worldwide” who will discuss and “expose” Zionist control of the film industry and the influence of the “Zionist lobby in America.”

Numerous leading Holocaust deniers, conspiracy theorists and Sept. 11 “truthers,” who claim the World Trade Center destruction was an “inside job” by the United States or an Israeli operation, were among the speakers.

On Iranian state media, Benjamin said the conference discussed how U.S. military funding was at the expense of adequate healthcare for Americans, and that conferences like that “should lift the pressure off of the Palestinian people.” She also stated that Americans are being “manipulated” into supporting the fight against ISIS.

In the interview, she also stated that American foreign policy often works in Israel’s interest to the detriment of American interests, and that newly-elected Congressional representatives are “forced” to go on “one-sided propagandistic” trips to Israel.

In 2013, Benjamin got into a vocal confrontation with President Barack Obama over the continued existence of the terrorist detention facility at Guantanimo Bay.

The author of “Drone Warfare: Killing by Remote Control,” Benjamin organized the first-ever International Drone Summit, and led delegations to Pakistan and Yemen to meet with drone strike victims and families of Guantanamo detainees.

Kelly, a “frequent visitor to Afghanistan” with the Afghan Peace Volunteers, is a “war tax refuser” who has refused to pay U.S. income tax since 1980. A co-coordinator of Voices for Creative Nonviolence and a co-founder of Voices in the Wilderness, Kelly is about to serve a three-month prison sentence after being arrested at Whiteman Air Force Base in Missouri last year for crossing the boundary while protesting drone operations.

From 1996 to 2003, her organization openly defied economic sanctions against the Iraqi regime, and in 2004 she was arrested and sentenced to three months in prison for crossing into the Fort Benning military training school near Columbus, Ga.

In 2009, Kelly lived in Gaza during the final days of Operation Cast Lead. In 2011 she was on the “Audacity to Hope” “U.S. Boat to Gaza” project. She also tried to enter Gaza by flying into Tel Aviv as part of “Welcome to Palestine” but was deported by Israeli authorities.

This panel comes two months after an anti-Israel event was held on campus, “Almost Everything You Wanted to Know About Palestine but Were Afraid to Ask.” That panel, which was co-sponsored by the UAB Department of Foreign Languages and Literatures, was criticized as being “extremely biased” and “misleading.” Students from UAB Hillel or the local pro-Israel community who asked questions were openly mocked, sometimes receiving howls of protest from the crowd.

After the Nov. 12 panel, the Birmingham Jewish Federation met with UAB Provost Linda Lucas to discuss ways to encourage balanced debate “in an atmosphere free of intimidation where all voices and viewpoints could be heard.”

Lucas said she determined the panel “was well intended, but not planned or executed as well as it should have been… The format and panelists did not provide an opportunity for open, balanced and constructive educational dialogue.”

In a notice to members and friends of UAB Hillel, the Jewish student organization on campus, it was noted that many of the organizers of the Jan. 13 event are the same as those who organized the November panel.

The Hillel leadership urged the Jewish community and supporters to attend. “If we are wrong and it’s not a hate panel, you will have simply came out to hear an academic panel. If it’s what we suspect, we need your support,” the statement said.

According to the event’s Facebook page, 44 have said they are going and there were 46 “maybes” as of press time.