“Enchantress” a trip through the world of Jewish magic, tour concluding in NOLA 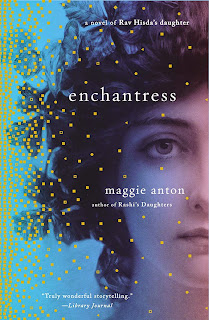 For Maggie Anton, writing “Rav Hisda’s Daughter” and “Enchantress” was an unexpected magical experience, and she will finish her current book tour in a city known for magic, New Orleans.

The author of the successful Rashi’s Daughters trilogy, Anton set out to explore Talmudic times as the background for her next two books. She was surprised to find that it launched her into the little-known world of Jewish magic — a world that many find difficult to believe existed, though much of current Jewish practice has echoes of it.

Anton spoke about “Rav Hisda’s Daughter” in Birmingham and Montgomery in May 2013. “Enchantress” was published in September 2014, and she will speak at Shir Chadash in Metairie on Feb. 5 at 7 p.m., and at a New Orleans Hadassah Keepers of the Gate luncheon on Feb. 6 at the home of Stan and Ellen Kessler.

Anton said she has never been to New Orleans, and “To wind up there on a speaking gig just before Mardi Gras is so beshert.” She admitted she knows little about Mardi Gras “other than figuring that it clearly has something to do with Purim.”

When she found out about the timing, her husband “who never goes on book tours with me… has agreed that he will fly out and we will spend six days in New Orleans.”

After doing the Rashi’s Daughters books set in 11th-century France, Anton looked for a different era to explore.

She discovered Rav Hisda’s daughter after seeing a story about her in the Talmud. While she was still very young, her father brought his two best students to her and asked her which one she wanted to marry. She answered, “both of them” — and that is what happened, though in succession after the first one died.

That piqued Anton’s interest, but there was one issue that was a major problem for a writer — the daughter’s name is never given. Looking for authentic women’s names from the period, she found out about recently-discovered Babylonian incantation bowls
Until recently, scholars have been reluctant to look into the parts of Talmud that have to do with magic. Archaeologists unearthing incantation bowls “didn’t want to admit how many people were doing it, that it was some weird sect.”

After 1990 Iraq War “with no government control, the archaeologists and looters started digging up like crazy” and that is when a lot of material has been found. Thousands of these bowls have been unearthed in ancient Jewish villages in Iraq, and the archaeologists were finding them under just about every house.

“Each bowl is unique to the client,” Anton said, mostly for benign purposes, such as healing, protecting children and pregnant women, averting the Evil Eye.

In the first book, she had bowls, amulets and incantations, all of which can be explained away. “I didn’t cross over into full-out fantasy where there was magic and it worked, but in ‘Enchantress’ I crossed that line.”

The summoning of demons and rabbis talking to birds “crosses into the fantasy world,” as does Rava creating a man out of nothing. “It is in the Talmud, how could I write a book and not put it in there?” she asked.

For some that was controversial, ascribing such things to revered historical figures, “even if they did, in the Talmud, what I write about.”

Anton did not invent any of the magic in the book. “The spells I used in the book are all authentic, they are either from the Talmud itself” or magic manuals that come from that period. And the characters who cast the spells (in the book) are the ones who cast them in the Talmud.”

There was a wealth of material, and she figured, “Why should I make up stuff when I have the real thing?”

That did not go over well in certain parts of the Orthodox community. One Long Island newspaper that had done reviews on her previous books refused to run one on “Enchantress.” The paper “refused to take my ad because I showed these historic great Talmudic sages doing magic, and magic is against Jewish law.”

Though the subject makes many uncomfortable based on the notion that Jews don’t “do” magic, she said that magic and sorcery were common and taken for granted in Talmudic times.

First of all, the Biblical prohibition against sorceresses was interpreted to refer to non-Jewish ones, unlike Jewish ones whose magic calls upon God.

Another rationale was pikuach nefesh, which states that one may violate almost any law to save a life. “They absolutely believed magic worked and that these incantations and spells were protective.”

Throughout the Talmud, sorceresses “are never condemned” by the rabbis and it is regarded as the sole province of women.

Still, it was regarded as necessary for the rabbis to know sorcery, especially in the Sanhedrin. “What if there is a sorceress in court?” Anton asked. The rabbis have to be able to detect one and be knowledgeable enough to counteract her. Especially, she noted, because in most magic books from that time “one of the first spells… was to influence an important person in your direction,” advantageous in a legal proceeding.

Several pages in the Talmud detail how to be sure that a healer is authentic and provides proven amulets and spells.

There is also a reference to a rabbi consulting the Head Sorceress. “How do you get to be the Head Sorceress? Is there Hogwarts in Babylonia?” she asked. And she added that implies an organization of sorceresses existed. “I was so flabbergasted at seeing that.”

She did limit her use of the magic in the book. When writing about curse spells or conjuring demons, “I didn’t give the whole incantation… I didn’t want to give anybody ideas.”

She noted that some prayers and practices today are based on ancient Jewish incantations. The mishebeirach, said for those who are ill, is traditionally said using the person’s mother’s name. That goes back to the incantation bowls, which had the mother’s name — which is how Anton came up with the authentic female names for her books.

There is also a prayer said after going to the bathroom, giving thanks for the body functioning properly. Anton said the prayer still said today is “part of an incantation that a person said as they washed hands three times for protection against the demons that live in the privy.”

She added that the Talmud says if you don’t do it and then touch your nose, then the demons will get in there and respiratory problems will follow, if you touch your eyes you will go blind.

“They were absolutely correct. I worked in a hospital for 35 years. If you had to name the best prophylactic practice to avoid getting sick, wash your hands!” she said. “They considered it a magical procedure, and it did work.”

Amulets and incantations “can work, the same way any placebo can work,” she said. “We know now the placebo effect is real” even when the person knows it is a placebo.

The Traveler’s Prayer is also an ancient incantation, and “of course these are amulets. These keychains with hamsa and the traveler’s blessing? I have one in my purse,” she said.

The six-pointed star with a circle around it is also an amulet. “According to some, that design is the seal of Solomon, and when Solomon wanted to summon the demons to make them work for him, he would draw this on the ground” much like witches would draw a pentagram.

Anton said this is the final book with Rav Hisda’s daughter. Unlike the Rashi’s Daughters trilogy, which should be read in order, the two Rav Hisda books were written to be stand-alone, “like two books in a detective series.”

As for which time period is next on her literary itinerary, she plans to take some time off after two hectic years of deadlines and touring. While she has nothing specific planned, “there is something rattling around in my head,” but “I’m not going to tempt the evil eye and say more.”