Mobile goes “Above and Beyond” for first Reita Franco Memorial film 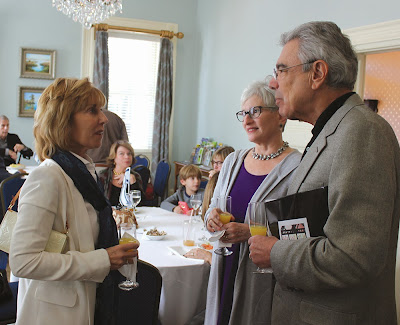 When the organizers of the Mobile Jewish Film Festival decided to have Nancy Spielberg’s documentary, “Above and Beyond: The Birth of the Israeli Air Force” as the first Reita Franco Memorial Film, they had no idea just how fitting that choice would be.

Reita Franco, who died last April, was a driving force behind the festival since its inception 14 years ago. She often would speak of the festival becoming big enough to draw a visit from Steven Spielberg — but that quip aside, there was a much bigger connection between the Spielbergs and the Franco family, especially on this film.

Nancy was in Mobile for the Jan. 18 screening and a patron’s reception at the Fort Conde Inn, where she spoke of her connection with Alan Franco of New Orleans, one of Reita’s three sons.

Through his work with the D-Day Museum, now the National World War II Museum in New Orleans, Alan Franco got to know Steven and his father, Arnold. Steven dedicated a wing at the museum in honor of Arnold.

During World War II, Arnold was communications chief of the 490th “Skull and Wings” Bombardment Squadron, known as the “Burma Bridge Busters.”

Steven Spielberg and Tom Hanks headlined the museum’s dedication in June 2000, and at the event Arnold called Nancy over to “meet my friend Alan.”

“That’s when I met Alan and that’s when we became friends,” she said.

Nancy said the only other time she had been to Mobile was in 1977, when Steven was filming “Close Encounters of the Third Kind.” She spent a hot August day in the huge airplane hangar there, “the worst mistake of my life.”

Nancy was inspired to produce “Above and Beyond” after reading a 2011 obituary for Al Schwimmer, who was credited with being a founder of the Israeli Air Force. She researched the story of U.S. and Canadian pilots, World War II veterans, who were inspired to fight for Israel’s independence despite the risk of losing their U.S. citizenship because of an administration embargo through the U.S. Neutrality Act.

The pilots — both Jews and non-Jews — trained and coordinated in secret to stay ahead of the FBI and played a critical role in repelling five invading Arab armies in 1948 after Israel declared independence. Some of them wound up flying repurposed Nazi planes, which had been abandoned in Czechoslovakia, that they had tried to shoot down a few years earlier.

Those Messerschmitts were able to best the Spitfires that had been flown by the Allies during the war for the first time, when flown by American pilots for the IDF, she noted.

Nancy said for most of the fighters, it wasn’t necessarily a strong sense of Zionism that motivated them. “They felt it was their duty to help someone who needed help.”

When she started telling people about her project, the reaction was mostly an astonished “that’s a great story.” But Alan “was the only guy who knew what I was talking about,” having read about it some years earlier.

She said he would send her articles and email her with bits of historical information, saying “did you know this?” She said she had to learn quickly so she could say yes to him.

Roberta Grossman was the film’s director. Because archival footage from 1948 was scarce, a lot of scenes had to be re-created. And with a small budget, that was a challenge — for one dogfight scene they needed to show 12 Spitfires. There was just one available, and doing quality CGI is expensive.

Nevertheless, Nancy contacted George Lucas’ Industrial Light & Magic and they agreed to do it pro bono, creating 11 more Spitfires for the scene.

She wanted to finish the film as quickly as possible, because of the age of the pilots. Already, two of the film’s subjects have died.

“Above and Beyond” had its debut last summer at the Jerusalem Film Festival, including a private screening for Israeli Air Force members. Arnold was in attendance for the screening.

The U.S. debut was two weeks later at the San Francisco Jewish Film Festival — during the height of the Gaza operation.

In Jerusalem, her concern was whether the film got everything right in front of an audience of “family,” while her concern in San Francisco had more to do with reaction to the film with the backdrop of the war in Gaza.

In California “they took the film as it should be taken — celebrating those guys and not trying to twist it into a political agenda.”

A major event is planned around the film for April 22 at the World War II Museum in New Orleans. The Jewish community will have an Israel Independence Day event with a 5:30 p.m. reception, followed by a talk by Nancy at 6:30 p.m., and the film will be screened at 7 p.m., followed by a question and answer session.

The Greater New Orleans Rabbinic Council will have a Memorial Day service as part of the evening.

Seating is extremely limited, and reservations are required. The cost to attend is $18, $10 for students and adults under age 30. Reservations can be made through the Jewish Federation of Greater New Orleans.

The film is also schedule to be screened at the American Israel Public Affairs Committee Policy Conference in Washington in March.

At the reception before the Mobile screening, Barry Silverman paid tribute to Reita and Edward Franco, saying that after they arrived in Mobile in 1976, “each of them gave so much of their energy to the Jewish community.”

When the festival began as a program of the Goldring/Woldenberg Institute of Southern Jewish Life, she traveled to Jackson each year to view and select films. “Her sense of what people wanted to see was an inspiration,” Silverman said. Though she did not like fundraising, she took the lead each year, later insisting — for several years — that it would be her last year.

Silverman said they hope the Reita Franco Memorial Film would be a big event each year, and “she would be very excited to welcome Nancy Spielberg today.”

Silverman also announced that the Franco sons are setting up the Reita Franco Mobile Jewish Film Festival Endowment. “This is going to enable us to really expand the film festival with exhibits, musical performances and speakers that will honor Reita’s memory.”