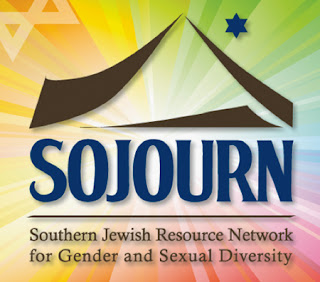 Timing? The Atlanta-based Southern Jewish Resource Network for Gender and Sexual Diversity had planned its first Birmingham event for Feb. 23 before the court ruling came out. Details below.

With Alabama poised to have same-sex marriages recognized, Rabbi Jonathan Miller said “it is nice to see the State of Alabama catching up with Temple Emanu-El.”

The state’s law and constitutional amendment barring same-sex marriages were struck down by U.S. District Judge Ginny Granade on Jan. 23 and 26, but she allowed a two-week stay of the order so the state could appeal. The 11th Circuit Federal appeals court denied the state’s request, so a rush of weddings is expected for Feb. 9, when the stay is lifted.

Many judges across the state are ready to issue licenses, though Alabama Supreme Court Chief Justice Roy Moore has advised county judges that they do not have to recognize a Federal decision, short of a ruling by the U.S. Supreme Court.

Jewish same-sex couples should not have much difficulty in finding someone to officiate their ceremonies.

Miller, whose Birmingham congregation is the largest synagogue in Alabama, said he has heard no resistance to same-sex ceremonies in his Reform congregation, and has already officiated a ceremony for two men.

Rabbi Elliot Stevens of Montgomery’s Temple Beth Or, which is Reform, has also officiated a same-gender wedding, in the fall of 2013, “and proudly did a Jewish wedding, albeit without legal sanction by license or recognition.” The couple then had a civil marriage in a different state.

He said Beth Or revised its constitution from “spouse” to “spouses and partners” in reference to membership, and said there have been “a number of same-gender couples in our membership for years.”

Rabbi Barry Altmark of Birmingham said he has officiated at same-sex weddings in California. “It is very simple to me, if two Jews love each other and want to be married I will marry them,” Altmark said. “When it becomes legal in Alabama, and eventually it will become legal, I will be honored to perform same sex weddings here in Alabama.”

Rabbi Randall Konigsburg of Temple Beth-El in Birmingham, the state’s largest Conservative congregation, said if same-sex marriage is legal in the state, then a Conservative rabbi is permitted to officiate. “The Rabbinical Assembly has produced a wedding service for same sex couples,” he noted. His daughter, Rabbi Ashira Konigsburg, is the secretary for the Committee on Law and Standards, which determines acceptable practice in the Conservative movement.

Beth-El does not currently have a policy either way.

Rabbi Scott Kramer of Agudath Israel-Etz Ahayem in Montgomery, a Conservative congregation, said he has not been asked to do a same-sex ceremony yet, but “I personally would not have a problem with that and believe that my congregation would support my decision to perform such a ceremony.”

He noted his congregation accepts “all Jews as members without regard to sexual orientation.”

One factor that could prevent a same-sex wedding from taking place in a synagogue is a different ban — if the couple is interfaith. While some Reform rabbis will perform interfaith ceremonies, Conservative rabbis are barred from taking part.

Konigsburg noted, “One may not be able to change sexual orientation but you can change religion. You have to be Jewish to be married by Jewish Law. Otherwise the ceremony has no meaning to someone who is not Jewish.”

Orthodox rabbis also do not perform intermarriages, nor are they going to perform same-sex ceremonies.

Rabbi Yossi Posner of Chabad of Alabama said that though it may be legal in Alabama, he is not going to “compromise my position” that the Torah mandates marriage between a man and a woman and officiate a same-sex ceremony.

But Posner added that not following the prohibition on homosexuality in the Torah is like someone not following the kosher laws, and that Chabad is not there to judge anyone’s level of observance. “A Jew always belongs” and should always be welcomed “because they are part of the family,” even though he can not perform that ceremony for them.

Rabbi Eytan Yammer of Birmingham’s Knesseth Israel, the state’s only Orthodox congregation, hopes that there will still be protection for “the rights of religious organizations to practice their religion as they feel is necessary.”

While there won’t be same-sex weddings at Knesseth Israel, Yammer said the key “is to treat people with love and respect.”

He said the idea of marriage is a religious one, and that the state’s recognition of marriage is essentially a financial relationship. “I don’t think halacha (Jewish law) has anything to say about how the United States constructs its tax shelters.”

Yammer noted that the separation of church and state “has served the Jewish community incredibly over the past couple of centuries,” and “I should advocate” for that civil protection for everyone, regardless of his religious views.

Kramer sees the issue of same-sex marriage “as having more to do with basic rights, that we all enjoy, being given to committed, caring and loving same sex partners than it does with religious issues. The right to visit your partner in the hospital, the right to health insurance for a spouse, to adoption, inheritance and tax benefits are all things we take for granted. These basic civil rights do not in my mind constitute our myriad religions in the United States being forced to perform same sex marriages or commitment ceremonies,” and each faith tradition needs to come up with their own conclusion.

In some smaller communities, the issue has not come up. Rabbi Steven Jacobs said Tuscaloosa’s Temple Emanu-El has no stated policy on way or the other; while he has been approached once to officiate a same-sex ceremony, “it never came to pass.”

Jacobs commented that it is sad that both sides of the issue “appear to line-up as hardliners” preventing “reasoned discussion.”

Rabbi Elizabeth Bahar of Temple B’nai Sholom in Huntsville said “it is an exciting time when we start to recognize that we are all created in the image of God and we all deserve equal rights before the state.”

She said her congregation’s membership form says “Partner A/B” and B’nai Sholom has always accepted GLBT couples. “I, as the rabbi, have always been open to performing same-sex wedding ceremonies, but have yet to be asked. When asked I am happy to make a simcha all that more special for the couple!”

The Anti-Defamation League stated it was “relieved” that the U.S. Supreme Court ruled in favor of allowing the ceremonies despite Moore’s decree. In ordering probate judges to not issue same-sex marriage licenses, Moore “wholly contradicted” his obligation to uphold the U.S. Constitution, said ADL Southeastern Regional Director Mark Moskowitz. “Although he is entitled to his own personal views on marriage equality, he has no right to flout his constitutionally mandated judicial duties.”

SOJOURN, the Southern Jewish Resource Network for Gender and Sexual Diversity, will have its first Birmingham program this month.

The Atlanta-based organization was recently included in the annual Slingshot Guide of “the most innovative and effective Jewish organizations, programs and projects in North America.”

On Feb. 23, SOJOURN and the Levite Jewish Community Center are partnering for a screening of Groundspark’s “Straightlaced: How Gender’s Got Us All Tied Up.” The film’s creators will lead a discussion after the screening.

“Straightlaced” is directed by Academy Award-winning filmmaker Debra Chasnoff, and is part of Groundspark’s acclaimed Respect for All project. It is accompanied by an educational curriculum and professional development series.

The program was made possible by a $20,000 grant from the Mandel Foundation to bring educational programming to the Southeast in partnership with GroundSpark. Other programs will be in Atlanta, Blue Ridge, N.C. and Asheville.

Chasnoff said “There is exciting work happening now in Georgia, North Carolina and Alabama to support all students to be their best, fullest selves. We are honored that our films, curricula and professional development programs will be utilized to expand that work even further.”

The film, which is appropriate for all ages, explores the pressures, stereotypes and “rigid gender policing” American teens face around questions of gender and sexuality, including perspectives from over 50 teens who self-identify as straight, lesbian, gay, bisexual or questioning. The film demonstrates that much of teen life requires thinking about gender and sexuality, from girls who “dumb down” so they do not intimidate boys, to boys who are sexually active to “prove” that they are not gay, to non-conforming teens facing relentless bullying.

SOJOURN collaborates with religious and secular institutions to promote “equality and inclusion for gender- and sexually-diverse people from a Jewish perspective.” In addition to running inclusion training workshops for Jewish organizations throughout the South, SOJOURN has also contracted with the state of Georgia to train clergy of all faiths to address these issues in their communities.

Rebecca Stapel-Wax, executive director of SOJOURN, said “Being welcoming is more than just saying ‘we’re welcoming.’ Our program curriculum guides agencies in a thoughtful process to ensure that not only will lesbian, gay, bisexual and transgender Jews feel welcome in Birmingham’s community organizations, but the community feels comfortable in welcoming them.”

Levite JCC MORE (Membership, Outreach, Retention and Engagement) director Monika Fluerer added “Birmingham has always prided itself on its hospitality, and now we are able to put our words into action. We are excited to lead our community’s efforts to bring more people to our synagogues, schools, camps and other organizations.”

The Feb. 23 program kicks off the Welcoming Communities program in Birmingham. The 7 p.m. screening at the LJCC is open to the community.