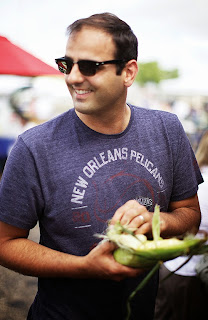 After exercising his passion for Italian food for several years, Alon Shaya is looking to his roots in his new venture, Shaya, which is having a soft opening this week.

The restaurant will have traditional and modern Israeli cuisine, influenced by his past and his recent visits to Israel.

He and his family moved to Philadelphia from Israel when he was four, and he spent a lot of time in the kitchen with his mother and grandmother.

The restaurant’s name and cuisine are a nod to his heritage. “I wanted to celebrate my family’s lineage through not only Israel, where I was born, but my father is Hungarian, my grandparents are Bulgarian, their grandparents came up through Spain, my father’s family came up through Persia.” He wanted the menu to “reflect that story and pull some influences from Israel but also places like Eastern Europe, Spain, Morocco, Greece.”

It will show that influence through a “beautiful combination of flavors, ingredients and techniques.”

Shaya started his culinary career at a Las Vegas casino but was “lured” to New Orleans in 2001 and became Chef de Cuisine at Besh Steak.

In 2009, Shaya and John Besh partnered to open Domenica in the Roosevelt Hotel. “I’ve had a chance to cook Italian for people for most of my career and that has always been one of my huge passions,” Shaya said. “I even moved to Italy and lived there for a while.”

In 2012 Shaya was New Orleans Magazine Chef of the Year, and he has been a finalist for Best Chef in the South at the James Beard Awards for the last three years.

Still, “people are always saying, when are you going to cook some Middle Eastern?” he said. He would answer “eventually, I really want to.”

Trips to Israel furthered that dream. In 2011, he and Besh were part of a delegation of chefs sent by the Jewish Federation of Greater New Orleans to the community’s Partnership2Gether community in Israel, Rosh Ha’Ayin. “Going on trips to Israel over the last few years has inspired me to want to start cooking this food for our customers,” he said.

The visit to Rosh Ha’Ayin “really kicked off what was inside,” he said. “I went there and ate all this amazing food, walked through the markets and saw all this really great stuff, and when I came back it influenced my cooking right away.”

He started adding Israeli influences to his menus, but the dream grew stronger.

“We have such a strong team of people who were ready for a bigger opportunity” at his restaurants, and in opening Shaya nine of them are being promoted. Also, “this space came up that we are excited about,” so “all those stars aligned.”

That space, at 4213 Magazine Street, is the former Dominique’s on Magazine. Shaya said the art deco vibe already was reminiscent of Tel Aviv.

“We thought it was the right time for New Orleans, the right space… and this team is unstoppable,” he said.

The new restaurant is already creating a lot of buzz. Southern Living named Shaya one of the 50 people changing the South in 2015, saying that he “shows off the foods of his native country and fills underrepresented space in the South’s rich dining scene” with the new place.

Eater National featured the restaurant in its 33 most anticipated restaurant openings of early 2015.

He has been assembling a team of chefs and managers running the day-to-day operations “and I will be overseeing all three operations.”

Shaya will have a wood-burning oven in the dining room to make pita bread, “so we will be constantly making fresh pita bread to order” throughout service.

For those who have had home hospitality in Rosh Ha’Ayin, he has been working on Yemenite kubana bread. “I’m not sure if it will be on the opening menu, but it will make an appearance,” Shaya said.

A section of the menu will elevate regular hummus with seasonal toppings. Among the ones he has been working on are curried cauliflower and onion, roasted tomato and fried eggplant, seared duck breast with buttered leeks.

The restaurant will also feature “all the beautiful salads and spreads that come out to the table when you sit down to eat in Israel.”

“There will be plenty to choose from,” he said, adding that it will range from simple meals for $10 to $15 per person, “or you can come in and make an anniversary dinner out of it and be there for hours, get some really great wine and order four courses.”

Opening Domenica “was an opportunity for me to grow and learn and do something I was passionate about,” he said, and his business partners “have made all of these dreams come true and allowed me the opportunity to truly do what I love.”