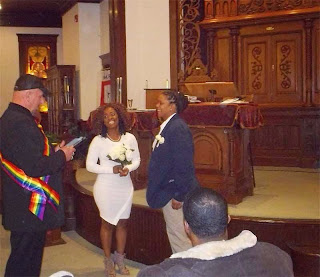 On Feb. 12, Temple B’nai Sholom in Huntsville hosted 27 weddings in a single day — many more than in the previous decade — and the congregation’s rabbi didn’t officiate at a single one.

Instead, Rabbi Elizabeth Bahar welcomed local ministers and non-sectarian wedding officiants as they thronged into the building’s sanctuary, library and classrooms to perform weddings for same-sex couples. She was joined by many Temple members who volunteered to serve wedding cupcakes and coffee, act as tour guides for the historic building, and cheer the happy couples.

How did this happen? It’s a joke few comedians could resist: gay marriage became legal and Alabama froze over. Except that the weather was no joke to the organizers of Huntsville’s Wedding Week. The group had planned to offer five days of weddings in Big Spring Park in downtown Huntsville to mark the first week of legal recognition. Local ministers and wedding officiants, florists, photographers and bakers offered their services for free.

Over 40 same-sex couples married in the park on Feb. 9, the first day. They were soon joined by some confused heterosexual couples who had expected to have courthouse weddings and were disappointed to learn that Madison County Probate Judge Tommy Ragland had decided, “because of budget constraints,” to stop performing any weddings. That action meant that Huntsville’s “Wedding Week” got larger and more popular than the organizers had ever imagined.

Then the weather report grew colder than anyone imagined. Temperatures on Thursday were expected to be barely above freezing with a biting wind thrown in. “Freezing temperatures and outdoor weddings don’t mix,” noted Lynne Abbott, a Universal Life Church minister and one of Wedding Week’s organizers.

On Feb. 10, the group scrambled to find a nearby indoor venue and had nearly given up when several B’nai Sholom members who had dropped by to watch the weddings heard about the problem. “They called Rabbi Bahar and she immediately offered the building to us,” Abbott said.

The resulting flood of happy couples filled the Temple building to the brim. At one point, organizers said, there were three weddings in progress at the same time: in the library, the sanctuary and the rabbi’s study.

“Wedding Week is for everyone,” said volunteer Alix Moorehouse. She and her wife had a “Holy Union” ceremony in 1994 and married legally in Connecticut in 2009. “This is what equality means: everyone is treated the same and we all work together. The weddings in the park were incredible and I didn’t think the week could get any better, but here I am standing in a historic Jewish Temple celebrating same sex weddings.”

Even with the short notice, B’nai Sholom congregants worked together to make the event a success. Bahar said she was thrilled by how many congregants “just dropped by” to help serve cake, kvell with the brides and grooms, and do whatever they could to help. The Temple’s leadership was equally supportive, with B’nai Sholom President Sherman Banks offering this unequivocal endorsement: “We’ve got no choice. It’s who we are.”

Still, there were restrictions. Couples were welcome to use the Temple’s library, classrooms, and even the Sanctuary for ceremonies, but non-Jewish couples married in front of the bimah, not on it. Bahar stressed that the congregation wanted to be open to everyone, but with a few caveats. “We also had to retain a level of sanctity for our congregation.”

B’nai Sholom has long welcomed same-sex families and Bahar said her only disappointment was that she didn’t get to perform a Jewish wedding. “With all this love in the air, I really wanted to do a wedding, but I need a couple — and at least one of them needs to be Jewish!”

Asked why the Temple was so eager to participate when asked, Bahar shared the Talmudic lesson that one mitzvah leads to another mitzvah. A local church has opened its doors to the B’nai Sholom for Passover, she said, because the late 19th-century building isn’t large enough for the expected crowd. “We’re holding our community Passover Seder in a Christian church on their holiday of Good Friday. The Church of the Nativity is opening its doors to us and this was our opportunity to open our doors to another segment of the community.”