Bring on the corned beef 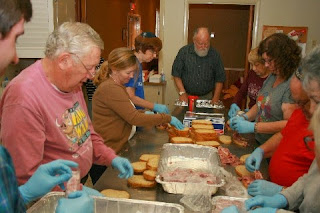 While many congregations have corned beef lunches this time of year as fundraisers, Valdosta’s Temple Israel seemingly sets out to feed the whole town.

About 50 families in the south Georgia congregation work on the annual event, which has a goal of 6,000 sandwiches this year. The population of Valdosta is around 54,000, so that means over 10 percent of the city will be dining on corned beef from Temple Israel.

The lunches are $10, with a 50 cent surcharge if ordered online. They include one-third pound of Hebrew National corned beef on rye, kosher pickle, chips, dessert and drink. The sale takes place on March 13, 15 and 16 and a portion of the proceeds goes to local non-profits in addition to being the congregation’s largest fundraiser each year.

This year’s food festival season began with the annual Montgomery Jewish Food Festival at Temple Beth Or on Feb. 22, and the annual corned beef luncheon at Hebrew Union Congregation in Greenville on Feb. 26.

Beth Shalom in Baton Rouge will have its 31st annual Deli for Lunch corned beef sale from March 15 to 17. Drive-thru and pickup will be available at Beth Shalom on March 15 from 11 a.m. to 1 p.m., and on March 16 and 17 there will be deliveries of orders of five lunches or more from 10 a.m. to noon.

The $9 lunches include a corned beef sandwich on rye, potato chips, dill pickle and homemade brownie. Tuna and egg salad sandwiches will be available by request.

Tickets are available at Beth Shalom, or orders can be placed online.

Springhill Avenue Temple’s Sisterhood Corned Beef Extravaganza in Mobile will be on March 17. The $10 lunches include a quarter-pound corned beef sandwich on rye, kosher pickle, New York-style cheesecake and bag of chips.

Orders must be placed by March 10 and can be picked up at Springhill Avenue Temple from 10:30 a.m. to noon. Delivery is available for orders of 10 or more.

The annual corned beef sandwich sale at Temple Sinai in Lake Charles will be on March 16. Lunches are ordered in advance and delivered or picked up at Temple Sinai during the day.

Alexandria’s Gemiluth Chassodim will have its corned beef lunch on March 17. The $8 lunches include a sandwich, cole slaw, potato chips and pickle. The lunches will be available for dine-in or carry-out, and delivery is available for orders of 10 or more.

Beth Israel in Jackson will have its 48th annual Bazaar on March 25, but this year it has been renamed the Beth Israel Congregation Bazaar instead of the Sisterhood Bazaar.

In Tuscaloosa, Temple Emanu-El will hold its second Jewish Food Festival on April 19, starting at 11:30 a.m. Last year was the congregation’s first time holding the event as a stand-alone, as it previously had been part of the opening night of Tuscaloosa’s now-defunct Jewish Film Festival.

The festival has boxed meals available, or a sampler bar where one can try a variety of items.

Dothan’s Temple Emanu-El will have its annual corned beef luncheon on April 30. Last year, the congregation sold just under 2,000 lunches, and 500 of the lunches were donated to nine local non-profits.

Perhaps the largest Jewish food festival in the region takes place in Arkansas every year.

The 2015 Jewish Food Festival will be at War Memorial Stadium in Little Rock on April 26. Last year, the first in the new venue, the festival attracted over 12,000 visitors despite severe weather, according to the Jewish Federation of Arkansas. By comparison, the Jewish population of the entire state is estimated at fewer than 2,000.

For the last three years, the festival has been named runner-up for Best Food Festival in the Arkansas Times.

The event begins with a Jewish breakfast at 8:30 a.m. The festival itself runs from 10 a.m. to 4 p.m., and includes corned beef sandwiches, lox, bagels and cream cheese, kosher hot dogs, rugelach and traditional Israeli dishes including kabobs, falafel and Israeli salad.

There are cultural and religious booths describing everything from Jewish life in Arkansas to ancient Israel, numerous artists, a children’s area and entertainment. There is a replica of the Western Wall for visitors to place prayer notes, and the notes are later taken to the real Western Wall in Jerusalem.

Performances include the B Flats, a Klezmer band, the Shechinotes and other acts. Admission is free.

Proceeds from the festival go to benefit Jewish Federation of Arkansas’s work in the community, which includes allocations to Jewish and non-Jewish charitable organizations, financial assistance to Jews in need, scholarships and other resources for Jewish children and families, and funds to support charitable work in Israel.