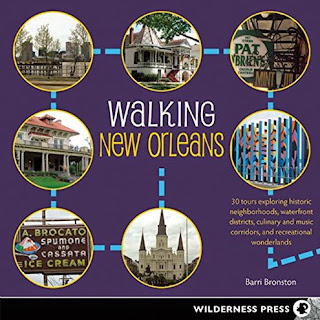 Though one may be a native New Orleanian, there is still a lot to learn about the city’s rich history and present.

Bronston spent most of her career as a staff writer at The Times-Picayune, where she covered parenting, education and other topics. She is currently assistant director of public relations at Tulane University.

The tours include maps, parking and public transit information, route summaries, points of interest and a quick-reference guide. The walks are grouped by theme, from culinary to spooky to family-friendly.

“Writing this book gave me an opportunity to explore neighborhoods and streets that I really knew little about — Treme, for example, Oretha Castle Haley Boulevard, Bywater, Algiers Point,” she said. “I think locals tend to take New Orleans for granted, whereas visitors and newcomers tend to really get out there and soak in everything that New Orleans has to offer.”

Among the things she learned while working on the book is the rich musical history of Algiers Point, how Henry’s Bar on Magazine Street was a favorite stop for Lee Harvey Oswald, and that St. Augustine’s Catholic Church is the oldest African-American Catholic parish in the country.

The tours range from St. Charles Avenue to Magazine Street to the Bywater and Faubourg Marigny. Each tour includes everything from historic sites to where to eat, drink, dance and play.

While there aren’t any specifically Jewish tours, several Jewish sites are included. The St. Charles Avenue tour includes the Jewish Community Center and Touro Synagogue, but does not extend as far as Temple Sinai.

She added, “The University neighborhood tour includes Hillel and Hillel’s Kitchen, a kosher restaurant that few people are aware is open to the public. The Riverfront tour includes the Holocaust Memorial. The Oretha Castle Haley tour points out that the street, formerly known as Dryades Street, was once a thriving neighborhood for Jewish-owned businesses.”

While it is coincidental that the book is coming out just before the 10th anniversary of Hurricane Katrina, “working on this book showed me how far New Orleans has come since that horrific day,” especially in areas like Lakeview and Mid-City. “That’s not to say the city has fully recovered. The Lower Ninth Ward still has a long way to go, for example, but even that area has its bright spots, among them Brad Pitt’s ‘Make It Right’ neighborhood, which features safe, sustainable homes for people who lost everything in the storm.”