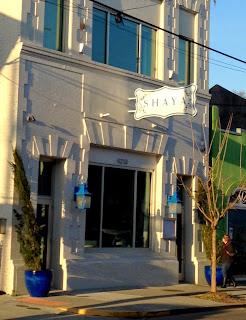 Four chefs, including Alon Shaya of New Orleans and John Currence of Oxford, Miss., will lead a “once in a lifetime” culinary tour of Israel this summer.

Also on the tour are Michael Solomonov of Philadelphia and Ashley Christensen of Raleigh, N.C.

Shaya notes that this is an opportunity to travel through Israel with James Beard Award winning chefs — “not me, them.” Shaya has been nominated for Best Chef South for the last three years and been a finalist for the last two. He is a semi-finalist this year, but finalists have not been announced yet.

Shaya opened his self-named Israeli restaurant, Shaya, in New Orleans last month after being executive chef at Domenica and Pizza Domenica. In 2012 he was named Chef of the Year by New Orleans magazine.

Shaya and Solomonov are long-time friends who have collaborated before. In 2013, they teamed up for an Israeli-themed wine dinner at the New Orleans Food and Wine Experience and led a seminar on Israeli street food. That fall, they led a culinary trip to Israel.

Aside from being born in Israel, both chefs share Bulgarian ancestry.

In 2011, Shaya was part of a Partnership2Gether trip, coordinated by the Jewish Federation of Greater New Orleans, that sent four New Orleans chefs to the community’s Israeli sister city, Rosh Ha’Ayin. Inspired by the trip, Shaya started adding Israeli flavors to his menus at Domenica and the trip pushed him toward his dream of opening an Israeli restaurant.

Born near Tel Aviv, Solomonov grew up in Pittsburgh. As a young adult he returned to Israel and worked at a bakery, making traditional items.

In 2003 his brother was killed while in the Israeli military. After that, Solomonov embarked on an exploration of Israeli food and culture while working in Philadelphia.

For his work at Zahav, Solomonov won the James Beard Award for Best Chef in the Mid-Atlantic region in 2011.

As part of his 2013 trip, Solomonov cooked a tribute dinner for his brother’s unit for the 10th yahrzeit.

Solomonov is also hosting a two-hour documentary, “The Search for Israeli Cuisine,” that is slated for broadcast on PBS. A Kickstarter campaign is currently underway to help complete the project, which “will feature Jews, Arabs, Palestinians, Christians, and Druze — kosher and non-kosher, secular and religious.”

Christensen opened Poole’s Diner in Raleigh in 2007, and in 2011 turned a former Piggly Wiggly building into three restaurants — Chicken + Honey, Chuck’s and Fox Liquor Bar. In 2013 she opened Joule Coffee.

In 2014 she was recognized as Best Chef Southeast by the James Beard Foundation.

A New Orleans native, Currence worked in North Carolina before returning to New Orleans to open Gautreau’s with a friend. He then went to the Brennan group to help open Bacco, and in 1992 moved to Oxford and opened City Grocery. He has since opened many additional restaurants, including Snackbar and Big Bad Breakfast.

In January 2013, Currence welcomed Atlanta chef Eli Kirshtein for “Big Bad Pop-Ups” with an Israeli street food theme. The four-week pop-up presentations were done while City Grocery was being renovated.

Christensen, Currence and Solomonov will be in New Orleans this month for the John Besh Foundation’s Fete des Chefs fundraiser, a night of 10 chef’s table dinners at homes around the city on March 21, followed by an after-party at Borgne.

The Israel tour will be from June 25 to July 6, and includes meals at some of Israel’s top restaurants and markets.

The trip includes a visit to Makura Farm nature preserve in an ancient volcano between millennia-old olive orchards. Wineries, gourmet cheese producers and outdoor markets are also on the schedule.

“We will wolf down amazing hummus in Jaffa and eat sardines that are less than an hour from the sea in Akko,” Solomonov said. “We will eat foie gras cooked over charcoal on skewers and Jerusalem mixed grill at 2 in the morning.”

Shaya said the group will taste the best hummus in the world, “world class wines in the same fields they are grown in, meet an artisan goat cheese producer in the Judean Hills and hike up waterfalls in an oasis by the Dead Sea.”

The chefs will prepare the final dinner on the trip at Arcadia Restaurant in Jerusalem.

Gil Travel is coordinating the trip.

“You will not come back hungry,” Shaya said.