A welcome return to Selma: Hundreds assemble at Mishkan Israel 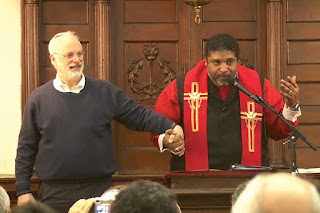 With reporting by Verna Gates and Deborah Layman

Fifty years ago, Selma’s Jewish community was less than thrilled about so many Jewish outsiders coming to town from across the country and demonstrating with the black community for civil rights, urging the activists to leave as quickly as possible.

Unlike then, on March 8, the few remaining Jews of Selma opened their synagogue, Mishkan Israel, to a delegation of Jews from across the country — and from across Alabama, again unlike 50 years ago — to a commemoration of Bloody Sunday.

The event was organized by Rabbi Fred Guttman of Temple Emanuel in Greensboro, N.C. Almost 100 of his congregants made the trip, most taking an all-night bus ride to meet with those who flew to the Birmingham airport, where they met up with many more participants, including many from Birmingham’s Jewish community.

About 15 from Montgomery’s Jewish community also made the much shorter trip along U.S. 80 for the event.

Guttman felt a “silent moment of revelation” during his bridge crossing at the 49th anniversary last year, and felt moved to organize a celebration for such an important day in Jewish history.

“Selma is a holy place. That bridge is responsible for the Voting Rights Act, which is imperiled right now,” said Guttman.

Many speakers described what Susannah Heschel called “the new Jim Crow” and the need to keep fighting for civil rights and against a resurgence of racism.
Heschel is the daughter of Rabbi Abraham Joshua Heschel, who marched with Rev. Martin Luther King Jr. in Selma in 1965.

Rabbi Randall Konigsburg of Birmingham’s Temple Beth-El introduced Susannah Heschel, noting that in 1958 there was an attempted Klan bombing at Beth-El. “Only the rain on a Saturday night kept our building intact,” he said.

Konigsburg said that during Rabbi Heschel’s long tenure at the Jewish Theological Seminary, he taught generations of rabbis about the importance of having social action as part of their rabbinate. “Being a rabbi is much more than books and sermons, it’s a calling, a call to justice, to equality and a call to cross all those bridges that separated people from their rights,” Konigsburg said.

“We, as Jews, have to care about other human beings. It is a Jewish responsibility. It is time to follow my father’s example and live a life of moral grandeur,” said Heschel, the Eli Black Professor of Jewish Studies at Dartmouth College.

The central teaching of Judaism is “compassion for all people,” she said.

While her father’s visit to Selma is legendary today, “Many Jews opposed us in those days, and my father was not honored when he returned from Selma, he was treated with shame or with indifference.”

Her father was attracted to King because Rabbi Heschel came from Nazi Germany where the Jewish Bible was ripped out of the Christian Bible and the notion of Jesus as a Jew was rejected.

In America, he found King, who made the Exodus narrative central to the civil rights movement, and routinely quoted the Hebrew Prophets.

She said the Jewish community needs to thank the civil rights movement “for what it has given to us as Jews… it brought the prophets back to life.”

Heschel called Selma “a moment in Jewish history, a reminder that being Jewish doesn’t mean being right-wing Republican… and Prime Minister Netanyahu does not speak for all Jews.”

Two other Jewish figures from that era received a great deal of attention — Andrew Goodman and Michael Schwerner, who were killed with James Chaney in Neshoba County, Mississippi while working to register black voters in 1964.

They were two of the 600 Jewish kids who journeyed South for Freedom Summer ‘64, most of them carrying with them memories of loved ones who perished in the Holocaust.

“They felt that injustice against anyone was an injustice to everyone, “ Guttman said.

David Goodman, younger brother of Andrew Goodman, said it was the first and last interracial lynching in American history, and it took the martyrdom of two white Jewish boys to get the attention of America.

“Because black lives didn’t matter,” said David Goodman, a word play on the call “Black Lives Matter” currently repeated by protestors and marchers. Had it been only Chaney, it likely would not have been national news.

In his opening remarks, Guttman asked if any were present who had marched on Bloody Sunday. One older black woman rose and received the first of many standing ovations given that day.

Guttman then recognized those in the room who were under the age of 20, the next generation of activists.

David Goodman also recognized those under the age of 20. “You’re the ones we have to depend on… we haven’t left you with the greatest conditions.”

Rabbi Jonah Pesner, the new director of the Religious Action Center of Reform Judaism, noted he is the first person in that position who was born after 1965.

Pesner spoke of the Jewish “hope that God’s kingdom of justice could actually be realized on this Earth.”

He gave the opening prayer at a dinner on March 6 for the 90 Congressional representatives and their staffers who were in Selma for the weekend’s events. Since it was the beginning of Shabbat, he asked the Jewish participants to join him in the front to say Shehecheyanu.

He noted that “wherever people have struggled for civil rights and social justice, the Jews have marched together” because of the national narrative of being freed from Egypt.

“How easy it was for us to come to Selma” this year, he noted, “but 50 years ago the risk was real because people died here.”

He brought a group of young adults with him to introduce them to what Guttman called “Selma, the new Mount Sinai.”

In North Carolina, Guttman is part of the Moral Monday Movement, an interfaith effort for social change and justice. His partner, North Carolina NAACP leader Rev. William Barber, gave a thunderous talk about the significance of Selma and the work yet to be done. He noted that he was not there for a party, but for a “recommitment and a holy convocation.”

He challenged those in attendance to address inequities in health care, equal protection of the law, LGBT rights, equal opportunity and voting rights.

“We are going to walk across the bridge where we got voting rights when we have no Voting Rights Act. They cut the heart out of it,” Barber said.

He referred often to what he called a fusion movement, a blending together of what Guttman called “coalition of goodness.” By focusing on the things all agree on, positive change can move forward on the local and state level. For example, Barber pointed out that while some have been killed by police violence, many more have died because a governor refused to sign a piece of paper approving the expansion of Medicaid.

“We can’t change D.C. down, we have to change Selma up,” Barber said.

He told the crowd that “you don’t know how blessed I feel to be here with my Jewish family.” He called for a renewal of an interfaith coalition that “can come together once again and fight to secure pro-labor, anti-poverty policies that would uplift the poor” and address disparities in the criminal justice system.

A surprise guest was Peter Yarrow of Peter, Paul & Mary. He recalled being part of a concert for the 1965 marchers just outside of Montgomery on the night before the march reached the State Capitol. The performers were on a makeshift stage in the midst of a muddy field.

At the time, Alabama “was like a war zone. You never knew what was going to happen,” he said. 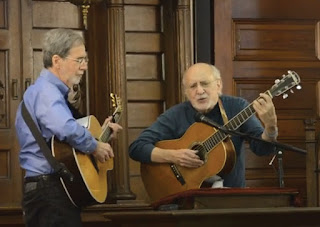 Yarrow said he came to Mishkan Israel specifically to sing “Blowing in the Wind,” which he called “a holy song.”

Clarence Jones, political advisor, counsel and draft speechwriter for King, was another surprise guest. He heard about the gathering and came to the program. “If the surviving lions do not tell their story,” he said, “then the hunters will get all the credit.”

Jones gave a firsthand account of the Selma experience, pointing out that President Lyndon B. Johnson played a positive role in the advancement of civil rights, and emphasizing the commitment and leadership of the Jewish community.

Most of the speakers said the event was more of a rededication than a celebration.

However, the issues have gained in complexity, according to Rabbi Jonathan Miller, of Temple Emanu-El in Birmingham. Getting rid of poll taxes and literacy tests took the passing of a law. Creating equal opportunity presents tough challenges, as does healthcare and educational equality.

“The Jewish community is going to have to double down. There is too much suffering in America,” Pesner said in an interview.

“We can use our faith as a powerful source of good,” said Claire Shimberg, 23.

After the program, there was a luncheon and then the participants walked the few blocks through downtown to the Edmund Pettus Bridge, joining the roughly 80,000 people who came to Selma for the anniversary.