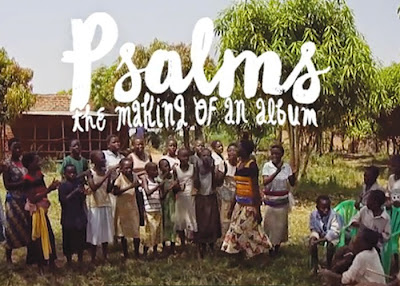 What do Jews from West Virginia have in common with Jews from Uganda?

In the case of “Psalms: The Making of an Album,” it is unique musical styles that are rooted in Judaism and in the music of their surroundings.

A film project will bring them together this December to make music and explore what, if anything, they have in common.

Director Jon Matthews, whose most recent work was “Surviving Cliffside” and who was co-producer of Academy Award-winning documentary “Citizen Four,” said “both of these groups play really unique music.”

He began this odyssey when television and film composer Ernest Adzentovich approached him with film footage he had taken during a visit to Uganda in early 2012 and asked him to develop something with it.

The Abayudaya is a small group of Ugandans that identify as Jewish. When Christian missionaries left Bibles in Uganda in the 1880s, this group started to follow the Torah and adopted their own form of Judaism. In 1920 a foreign Jew named Yosef visited and provided knowledge of Jewish practices and kashrut, which the community still follows.

During the days of Idi Amin’s rule, the group was persecuted and their numbers dwindled, with some practicing in secret. In 1962 an Israeli became the second Jew from the outside world to visit the community, which has undergone a revival since the 1980s.

In 2002 about 400 Abayudaya were formally converted to Judaism by the Conservative movement, but the residents of Putti, who have a strict Orthodox lifestyle, are seeking an Orthodox conversion.

Putti is located near the Kenyan border. Matthews said the travel time from the capital city, Kampala, is anywhere from four to 10 hours, depending on road conditions and how many animals are on the road.

New York saxophonist Mike Cohen visited the village in 2008 after meeting community leader Enosh Keki Mainahh in the Save Ugandan Jewry newsgroup online and they traded recordings. Mainahh, a musician, said his mother had composed songs based on the psalms but wasn’t able to record them.

With the help of backers, Cohen went to Uganda and recorded the Putti choir with a challenging one-microphone setup. “When I Wake Up, The Music Of Putti” was released the next year. Cohen called it “some of the most beautiful music I have ever recorded.”

Cohen is on the board of the Putti Village Assistance Organization, which seeks to make Putti a “fully sustainable village… economically, ecologically, educationally, and otherwise.”

In 2012, Cohen returned to Uganda with Adzentovich, who mixed and mastered “When I Wake Up,” as his engineer. They spent 16 days in Uganda working on the second album, “I Love to Sing,” which includes “Ein Keloheinu,” “L’Cha Dodi,” “Shir Hamalot” and “Esa Enai.”

The footage Adzentovich brought to Matthews was from that trip.

“I’d never heard of the Abayudaya before,” Matthews said, “and the more I learned about it the more interested I became.”

Soon after that, Matthews was speaking at a conference in his home state of West Virginia, and he met Rabbi James Cohn of Temple Israel in Charleston. “I told him about the Uganda project and I didn’t know what I wanted to do with it.”

After the encounter, Matthews reflected that he’d “never heard much about Jewish West Virginians, much like you don’t hear the phrase Jewish Ugandans.” When he was growing up, he didn’t know anyone in his town who was Jewish.

He started meeting Jewish musicians in West Virginia, such as Mike Pushkin, a cab driver who was elected to the House of Delegates, and multi-instrumentalist Dina Hornbaker. Listening to their Appalachian-styled Jewish music, Matthews came up with the project, which deals with identity, culture and ethnicity.

In December, they will travel with the West Virginia musicians to Uganda, uniting the different musical styles. The film will be about the making of an album from the encounter, how the two groups communicate musically.

Matthews noted that in Uganda, the language of music is different. Adzentovich couldn’t speak with the Ugandans in terms of major and minor keys, for example.

If the album and film do well, the ultimate goal is to have the Abayudaya come to West Virginia and have a reunion concert on NPR’s Mountain Stage program.

“Our real goal is exploring identity,” Matthews said. “And the more specific we get with that question, the more universal the implications will be. Exploring the question of what it means to be Jewish will get at the deeper human question of ‘what makes us who we are’ and why that is so important.”

There is a Kickstarter campaign through April 2 for the film, but there are also numerous backers from across the country. The goal is to have the film ready for submission to film festivals by September 2016.