In 1965, Selma’s Jews were in tough position 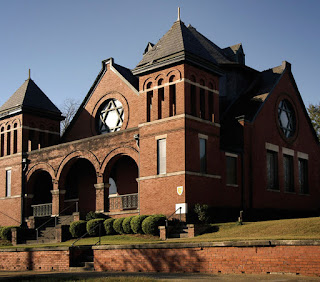 Rabbi Joseph Gumbiner, who had been rabbi at Selma’s Mishkan Israel in the 1930s and came back for five days in March 1965 to participate in civil rights demonstrations, wrote that “there is no record of any Jewish person there becoming involved in the civil rights movement,” a failure “shared by the white population as a whole.”

That may have been an overstatement, but as with so many Jewish communities in the region, small numbers and vulnerability limited what could be done.

Pressure from national groups was not welcomed, because Selma’s Jews had been trying to fit in with the broader community and they did not want non-Jews to associate them with the vocal national groups.

In 1956, members of Selma’s B’nai B’rith lodge issued a statement urging groups like the ADL and American Jewish Committee to concentrate on Jewish issues and stay out of the debate over segregation.

Sociologist Marshall Bloom, whose 1966 senior thesis at Amherst was about the Jewish community of Selma, stated that fewer than one-fifth of Selma’s Jews could be described as “strongly segregationist,” but many felt they had to make an appearance of going along with the White Citizens’ Council. The Councils were more middle and upper class than the Ku Klux Klan, but also used intimidation and occasionally violence to fight against integration.

In 1965, Bloom co-founded the Southern Courier, a Selma independent newspaper that emphasized coverage of civil rights.

When the Selma demonstrations took place, there was still resentment against national organizations coming in to make their statements while members of the Selma Jewish community were suffering an economic backlash.

While passionate segregationists were quite few in the Jewish community, Selma had one in Sol Tepper. A close friend of notorious Dallas County Sheriff Jim Clark, Tepper answered much of Clark’s mail, in letter form and in a weekly radio show.

Tepper also established a Committee for the Economic Improvement of Colored People in 1963 — where he offered northern communities that spoke of integration the opportunity to receive some of Selma’s blacks.

Tepper was a member of Clark’s “posse,” an unofficial group of Klansmen and others who were seen as an anti-civil rights force. When Tepper showed up as the demonstrations intensified in early 1965, he brought an M-1 army rifle, which even Clark’s chief deputy told him not to use.

Tepper’s presence in the White Citizens’ Council kept anti-Semitism at bay. When one member showed up with a copy of the anti-Semitic newspaper Thunderbolt, Tepper thundered that he would meet anyone outside. That was the last time that paper appeared at a meeting.

After Bloody Sunday coverage critical of Selma was found even in Alabama media outlets, Tepper railed against what he saw as the unjust criticism of those who were trying to maintain law and order in the face of lawlessness by outsiders.

After Unitarian Reverend James Reeb was beaten by segregationists in Selma on March 9 and died two days later, there was a national outpouring of condemnation. In response, Tepper circulated “Ten Big Questions Regarding the Death of Reverend Reeb in Selma, Alabama,” alleging that it was the civil rights activists themselves who had killed him.

He was especially pained by all the Jewish representatives who marched in the demonstrations, figuring the visitors were staining the good reputation Selma’s Jews had. He wrote to one of the visiting rabbis, “I am proud of my Jewish heritage. I am not proud that you call yourself a Jew. In fact, I say you are not.”

While Tepper was on one extreme, some members of the Jewish community, which numbered perhaps 150, were working with other moderates at great risk to their livelihoods.

A group of white moderates had started meeting every week at People’s Bank in Selma in late 1963. After Joe Smitherman’s election as mayor it was felt that there could be areas where progress could be made in race relations, and the group was expanded.

Among those who took part were cotton broker Charles Hohenberg, who was born Jewish but became a Presbyterian, Jewish merchant Morris Barton and car dealer Arthur Lewis.

The Voters League and the Student Nonviolent Coordinating Committee had organized a Christmas boycott in December 1963, continuing well into 1964, hitting Jewish merchants hard. The Retail Merchants Association was open to dialogue with the activists, but the White Citizens Council threatened any merchant that went against the prevailing segregation, pressing the white community for unity in the face of the demonstrations. The Council also sought a boycott of the Selma Times-Journal for being too moderate.

The president of the Retail Merchants Association proposed a meeting for Feb. 8 to discuss establishing a merchant boycott on advertising in the Times-Journal, but Seymour Palmer, a Jewish merchant, pressed Smitherman and city councilman George Swift to intervene and prevent the meeting, saying there was too much dividing the community already.

In the view of the moderates, a major incentive for solving the problems arising from the demonstrations was attracting new business. Dan River Mills announced a new textile plant in September 1964, and Hammermill Paper announced a long-awaited Selma plant on Feb. 3, 1965.

In response, SNCC tried to organize protests at every Hammermill in the country. At the end of March, Martin Luther King Jr. even called for a national boycott of Alabama-made products and for unions to refuse to transport them.

In April 1965, the Civil Rights Act prohibitions on racial discrimination in hiring were set to start, and the Alabama Chamber of Commerce planned a large ad in state newspapers and the Wall Street Journal, urging businesses to follow the law. Local chambers were asked to co-sponsor and sign the ad, but there was one conspicuous absence when it appeared on April 15 — Selma.

The Selma Chamber’s president, grocery executive James Gaston, was upset that the Selma chamber had refused to sign, so he teamed with other moderates, some of them Jewish, to reprint the ad with their signatures.

Among those involved were Hohenberg and Jerome Siegel, who was president of the Committee of 100 Plus. They enlisted 1,000 whites, then approached the City Council and the Board of Revenue for the first real public debate over the racial issue.

At the meeting, some in the White Citizens Council accused the city of promising integration to attract the paper mill, a charge that Siegel denied. Siegel said the failure of Selma to sign the ad was a tactical gift that King could use against the city.

Moderates noted that the law was a fait accompli, to which Tepper retorted that death was also inevitable, but that did not mean it was something for him to embrace.

After the contentious debate, the city council unanimously voted to sign the ad, which appeared on April 18 in the Times-Journal and the Wall Street Journal, with the signatures of almost 1,300 whites from Selma.

Still, moderates did face a backlash for desegregationist sins, real and perceived. A rumor that Gaston had sent sandwiches to black demonstrators and donated to the NAACP was enough to target him for a white boycott in early 1965.

A Jewish couple, auto dealer Arthur Lewis and his wife Muriel, were targeted for speaking out. Enraged by the events of Bloody Sunday in March 1965, she wrote a letter to the Times-Journal, defending the work of a Federal commissioner who was in town trying to facilitate a rational discussion.

The Lewises sent a letter to a few close friends who they considered moderate, encouraging them to speak out, but not to share that letter.

A version of their letter soon circulated among members of the Citizens Council, edited to make them sound more radical. Late night telephone calls, hate mail and a boycott of the car dealership soon followed.

They tried to get a dozen or so important moderates to sign a “Declaration of Good Faith” in the newspaper, pledging communication and respect, but were frustrated by the lack of response.

A weaker version of the “Declaration” was eventually published.

The Lewises considered leaving Selma but decided to stay, though the stress of the fallout led to Arthur Lewis’ death of a heart attack not even two years later at age 53.

In the 1920s, the Jewish community of Selma was sizeable enough that it was said one could roll a bowling ball down Broad Street on Rosh Hashanah and not hit anyone, because all of the stores were closed. Today, while Mishkan Israel still houses an occasional service, the Selma Jewish community has dwindled to a handful.