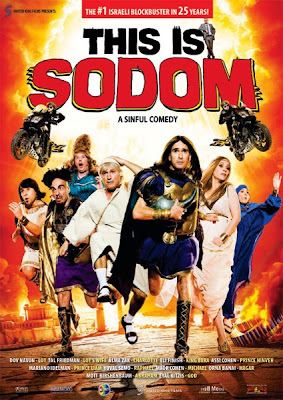 The North Louisiana Jewish Film Festival will be held in Shreveport from April 12 to 16 at the Robinson Film Center.

Unlike many Jewish film festivals, during the five days of screenings there will be five films shown multiple times, instead of one each day.

On April 12, there will be a program of short films at 1 p.m., “Beneath the Helmet” at 3:15 p.m., a festival reception at 5:30 p.m. and “Night Will Fall” at 6:30 p.m. Following the evening screening, Auschwitz survivor Rosa Blum and Alexander Mikaberidze, the Sybil and Frederick Patten Professor of History at Louisiana State University at Shreveport, will speak.

On April 15, “Ida” will be at 3:30 p.m., “This Is Sodom” at 5:30 p.m. and “Beneath the Helmet” at 7:30 p.m., followed by a question and answer session with Shreveport native Sarida Muslow, who will discuss her experiences serving in the Israel Defense Forces.

The final day, April 16, will have “Night Will Fall” at 3:30 p.m., “Ida” at 5:30 p.m. and the shorts program at 7:30 p.m. The screening of “Ida” will be part of the Faith on Film interfaith discussion series, with Rabbi Jana DeBenedetti and Bishop Michael Duca speaking.

A shuttle bus will be available from B’nai Zion for the “Night Will Fall” screening on April 12, with reservations made to the Federation office.

“Night Will Fall” is a 2014 documentary about the making of a 1945 British documentary, “German Concentration Camps Factual Survey,” showing footage from newly-liberated concentration camps. The documentary was produced by Sidney Bernstein, a British government official, with participation by Alfred Hitchcock.

The British documentary was shelved in archives and took nearly 70 years to complete. The film features interviews with those involved in the original film, contemporary talks with survivors and explores the changing political winds that led the British film to be shelved.

“This Is Sodom” is an Israeli comedy from 2010 and was the most-viewed film in Israel in 25 years. A comical description of the Biblical story of Sodom, the film centers on Lot’s family and Bera, the king of Sodom, and a plot by the king to switch places with Lot.

“Beneath the Helmet” is a documentary about five Israeli high school graduates as they go into the army at age 18, and how they confront issues of peace, equality, opportunity, democracy, religious tolerance and women’s rights.

“Ida” is the 2015 Academy Award winner for best foreign language film. The film depicts a woman and her aunt who take a new identity and embark “on a revelatory journey to discover family history and unearth dark secrets dating back to the Nazi occupation” as she discovers on the eve of taking vows as a nun that she comes from a Jewish family and her parents had been killed in the Holocaust.

The short film program contains three entries — “The Lady in Number 6: Music Saved My Life,” “7 Day Gig” and “Next Year in Bombay.”

“Number 6” is an Oscar-winning documentary about Alice Herz Sommer, a 109-year-old Holocaust survivor and the world’s oldest pianist, discussing her story on how to achieve a long and happy life.

“7 Day Gig” is a comedy about a punk, an old man and a chicken who gather in response to a Craigslist ad from a Romanian/Guamanian/Catholic/Jew looking for mourners to join him for a makeshift shiva.

“Bombay” is about Sharon and Sharona Galsulkar, the last educators in the Bombay Jewish community, which has existed for 2,000 years but is now disappearing.