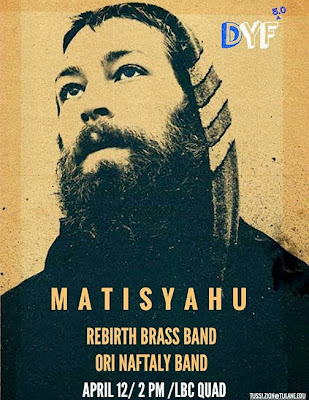 Joining Matisyahu on the free program will be the Rebirth Brass Band, Mystic Dad and the Ori Naftali Blues Band, the first Israeli group to reach the semi-finals of the International Blues Competition in Memphis.

Chloe Valdary of Allies for Israel at the University of New Orleans and Maor Shapira of Tulane University Students Supporting Israel are organizing the event, which will start at 2 p.m. on the LBC Quad.

There will be free food along with food trucks selling their items. Henna tattoos will be available, along with an art gallery, bazaar and a jam session for those who bring their own guitars.

At a time when Israel is under attack, especially on college campuses, Valdary says the festival is “taking the narrative back that was stolen from us and celebrating the beautiful story of the liberation movement of the Jewish people.”

The festival was endorsed by Alan Dershowitz, who said it “speaks truth to power — the best kind of answer to the defamation being heard across the country at college campuses about Israel, Zionism and the national liberation movement of the Jewish people.”

Shapira said Israel activism is too focused on relating the facts of the situation, while loyalty and solidarity come from an emotional connection.

The festival aims to provide a positive experience through arts, the spoken word, images and music.

Shapira noted a lot of supporters of Israel are afraid to speak up because of the anticipated reaction and that they would be seen as aligning with a cause that is accused of not being moral.

“By putting Zionism at the center of a large mainstream event we hope to empower supporters of Israel to speak up for Israel in the future,” Shapira said.

This year there will be less emphasis on speakers and politics. Instead, speakers will be giving personal stories and experiences. There will be information tents where attendees can learn more about a wide range of topics having to do with Israel.

The event will not be partisan, nor will it be focused on finding a solution to the situation in the Middle East.

Shapira and Valdary are both seniors, and they hope that the festival will continue after they graduate. Similar festivals are being organized at the University of Central Florida and at Indiana University.

In the last two years, Valdary has become a national figure in the pro-Israel movement. In mid-March, Allies for Israel at UNO responded to those who would boycott Israel by collecting signatures supporting a symbolic divestment from the Palestinian Authority as a way of supporting the Palestinian people who are suffering under a corrupt government.

She stated that a Palestinian student not only signed the petition, he spent three hours helping collect signatures from others.