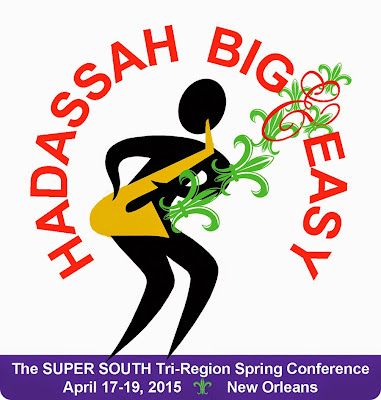 Three Hadassah regions will have a joint “Hadassah Big and Easy” spring conference and Shabbaton, April 17 to 19 in New Orleans at the Hilton Airport in Kenner.

The PRAZE division is Programming, Advocacy, Zionism and Education.

Roselle Ungar of New Orleans will also speak at the weekend. Keynote speaker will be Rachel Schonberger, resource chair for the Super South.

The focus will be viewing Hadassah from a cause-driven and social action agenda. A tour of Jewish New Orleans will also be available, and associates are welcome.

The night before the Hadassah Big and Easy Super South Tri-Region Conference gets underway in New Orleans, the New Orleans Chapter of Hadassah and the women of Shir Chadash are holding a program on human trafficking.

The panel, “Sex, Lies and Politics,” will be at Shir Chadash on April 16 at 7 p.m. The event is open to the community.

Moderator of the discussion will be Michelle Erenberg, Louisiana State Policy Advocacy Chair for the National Council of Jewish Women. Erenberg has worked and volunteered as a grassroots activist and organizer for more than a decade. She founded the Louisiana Women’s Roundtable, a collaborative effort of progressive organizations to educate the community about issues that matter to women, children and families.

The discussion will include human trafficking from New Orleans to around the world, global human rights violations, and violence against women and children.

Murphy is the organizer of the New Orleans Human Trafficking Working Group. Director of African and African American Studies at Loyola, she is the lead researcher for Loyola’s Modern Slavery Research Project.

Taylor’s research and teaching interests include intimate partner violence and other violent crimes, societal and organizational responses to violent crime, and social inequalities. Taylor has worked in the criminal justice system as a victim advocate, and she continues her training in victim services and crisis response. She holds graduate-level certification in domestic violence.

Tetlow directed the Domestic Violence Clinic at Tulane University Law School from 2005 to 2014. A former Federal prosecutor, Tetlow was named one of the city’s top 10 women by New Orleans Magazine for her work in domestic violence and rebuilding the public library system. Her scholarship focuses on constitutional law, criminal procedure and the rights of victims.

Early arrivals to the Hadassah conference are being urged to attend the panel.