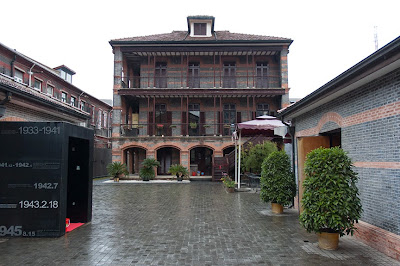 The courtyard of the Shanghai Jewish Refugees Museum

This year, the Birmingham International Center is focusing on China, and as in recent years, one of the programs has to do with the country’s Jewish community.

Cantor Robyn Helzner will present “Kreplach and Dim Sum: Yes, there are Jews in China” at the Levite Jewish Community Center on April 26 at 3 p.m. The event is free, but reservations are requested.

Helzner will do a multimedia presentation, sharing stories, photos, videos and music about the Jewish communities of Beijing, Hong Kong, Shanghai and Kaifeng.

In 1992, Helzner was hired as the High Holidays cantor for United Jewish Congregation of Hong Kong. The congregation consisted mostly of American executives, bankers, journalists and professors.

At the end of the service, she was offered the position for the following year, and served there for six years. She also did winter residencies and concerts, visiting the 500-member congregation a dozen times.

In Beijing, a Chinese Jazz band was taught how to play klezmer music and the Capital Club staff was instructed on Jewish catering. Silverberg prepared explanations of the service in Chinese. Guests were of Jewish and Chinese backgrounds and included friends from the International School.

The LJCC will also host the “Jewish Refugees in Shanghai” exhibit for two weeks, a traveling exhibit created by the Shanghai Jewish Refugees Museum. Located in the former Ohel Moshe Synagogue in the Tilanqiao Historical Area, the museum has taken a significant role in educating local and international visitors about the unique story of Jewish refugees in Shanghai.

Zhou Yujiang, consul and director of the political and press section of the Chinese Consulate in Houston, will attend the exhibit’s opening.

From 1933 to 1941 Shanghai opened its doors to over 18,000 Jewish refugees fleeing persecution and war in Europe, transforming the city into an “open city for Jews” at a time when much of the rest of the world was closed.

The traveling exhibit, which will be at the LJCC through May 10, has given communities around the world an opportunity to learn about this significant but little-known story about Jewish immigration and settlement in world history. The 40-panel exhibit highlights historical content and biographies of many “Shanghailanders” who escaped Europe and made Shanghai their temporary home.

The first Jews, Silk Road traders, arrived in China in the 8th century and settled in Kaifeng.

Marco Polo noted a Jewish presence in Beijing in the late 13th century.

Persian or Iraqi Jewish traders first arrived in Kaifeng, one of China’s imperial capitals, during the Middle Ages. At its height, the Jewish community there likely numbered around 5,000 people with rabbis, synagogues, and other communal institutions.

But assimilation and conversion took its toll on the community and by the mid-19th century, there was little left. Today, about 500-1,000 identifiable descendants of this community exist, with a number of them seeking to reconnect with their Jewish roots.

Last year, Shavei Israel, a group that helps “lost tribes” and forgotten Jewish communities return to their roots, held a Seder in Kaifeng last year, reportedly the first one there in centuries.

Many Jews arrived in China under British protection following the First Opium War in the 1840s. Some of these Jews were of Indian or Iraqi origin, due to British colonialism in these regions. These included David Sasson (the “Rothschild of the East”), philanthropic businessman Sir Eli (Eliazer) Khadori, and real estate mogul Silas Herdoon.

According to most accounts, the number of Sephardic Jews in China totaled around 1,000.

Around 4,000 Jews would then arrive as refugees from the Russian Revolution of 1917, followed by the wave of refugees to Shanghai in the late 1930s and 1940s. According to Peter Nash, a child survivor from Berlin who found refuge in Shanghai from 1939 to 1949, about 8,000 of these refugees originated from Germany and 4,000 came from Austria.

Japan’s win left Shanghai as the destination for the last refugees. The city was under a mosaic of rulers: the international settlement controlled by England and the U.S. with Japanese-controlled Hongkou on the northern Suzhou Creek, the French Concession, and the two Chinese districts that had grown up around foreigners of many nationalities.

This mosaic is what enabled easy entry into Shanghai for Jews who were relieved of their citizenship from Germany and considered “stateless,” said Jody Hirsh, a former Jewish Community Center program director in Hong Kong. It was not Chinese humanitarianism that allowed for Jewish entry into Shanghai, but the absence of passport controls.

“The Jews came there as refugees with nothing and they left it a much better community,” said Tokayer

Yet despite Shanghai having served a vital role in their lives, Jews looked to get out while China transitioned to Communist rule in 1949, Tokayer told JNS.org. Sephardic Jews, at risk of losing their bank accounts and businesses, fled abroad. Russian and German Jews opted for Mandatory Palestine, which welcomed all Jews. Others were able to secure U.S. visas.

“While it was no secret, relatively few in the global community were aware that there were Jewish communities living in Shanghai,” Nash said.

Kehillat Beijing brought organized Jewish life back to Beijing with its establishment in 1979. Chabad followed in 2001. In 1992, Nanjing University established an Institute of Jewish Studies.

Today there are roughly 5,000 Jews in Hong Kong, and about 2,000 each in Beijing and Shanghai.