More Jewish groups sign up for this year’s GiveNOLA Day, May 5 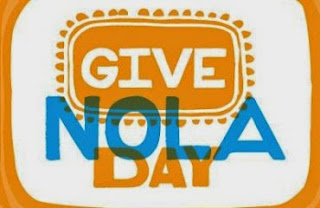 The second GiveNOLA Day will be on May 5, and will have much more participation by agencies in the Jewish community.

Hosted by the Greater New Orleans Foundation, GiveNOLA Day is a one-day, online giving event to inspire people to give generously to the nonprofit organizations that make the region a stronger and more thriving community for all.

Individuals can make online donations to participating nonprofits here from midnight to 11:59 p.m. on May 5. The minimum donation is $10. All donations made on that day give the nonprofits the opportunity to earn lagniappe dollars, awards and hourly prizes.

Awards include most money raised, most unique donors and randomly-drawn $1,000 hourly prizes. Donations to the Lagniappe Fund will be distributed to all agencies in proportion to what they raise on May 5, and the Foundation hopes to raise at least $250,000 in that fund, and many Jewish-owned businesses are already part of that effort.

In addition to regular contributions of $10 or more, Jewish Family Service notes that the agency will be moving offices later this spring, so GiveNOLA Day is an opportunity for a long-term gift. Contributors of $360 or more will have a mezuzah dedicated in the new office, with the donor’s name on a commemorative plaque. One mezuzah will also be raffled, with all who donate $36 or more receiving an entry.

The New Orleans Jewish Community Center said gifts to the agency through GiveNOLA Day “help us build for the future while allowing us to continue providing quality children’s education and camping experiences, free cultural programming, support for seniors, family fitness, and a welcoming Jewish home for our community.”

In addition, all new or increased gifts to Federation are matched with 25 percent extra by the Goldring and Woldenberg Family Foundations.

JNOLA will have a Cinco de Mayo GiveNOLA event at Cellar Door from 6:30 to 8:30 p.m., with complimentary drinks and hors d’oeuvres. There will be a match of up to $750 in gifts from Joshua and Mara Force, Brian and Lisa Katz, and Shea and Michelle Soll.

Last year, the Federation raised the most among Jewish groups, coming in 24th in total donors with 151, and 19th in funds raised with $20,760, not counting matches and Lagniappe funds.

Team Gleason topped the overall donors list last year with 631 for $42,864, while the Ogden Museum of Southern Art topped the dollar amount with $101,285 from 147 donors.