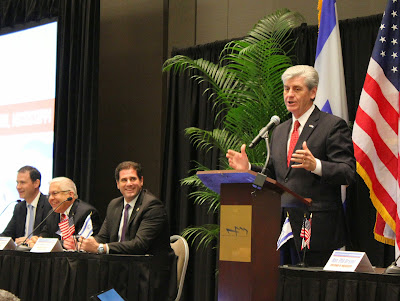 For the summit, Israeli Ambassador Ron Dermer made his first visit to Mississippi, accompanied by Ambassador Opher Aviran, Israel’s Consul General to the Southeast, based in Atlanta.

Throughout the summit, the importance of personal relationships was stressed, as was Mississippi’s affinity for Israel. “This is about building relationships, knowing one another,” Bryant said.

Dermer said the partnership between Israel and Mississippi will be “remarkable,” and Mississippi “has a lot to offer.” The wide range of Mississippi industries and expertise is a story that isn’t well-known and needs to be further publicized, Dermer said.

He added it will be interesting to see what happens when Mississippi charm meets Israeli chutzpah, but both qualities are needed for business.

Bryant said the Israel trip was “to see not only our friends but those who would be our friends.” When he spoke about having an Israel trade summit in Mississippi “I’m sure there were many who thought that could not happen, but look around,” he said.

After the November trip, Bryant said Israel “is the best opportunity for Mississippi since our relationship with Japan.”

One aspect he noted in Israel was how the first 10 minutes of a business contact was getting to know each other, “how’s your mama, how was your trip… that sounds like Mississippi.”

General Robert Fogelsong called the summit “a potential tipping point for the state of Israel and Mississippi.” A retired Air Force general and former assistant to the chairman of the Joint Chiefs of Staff, Fogelsong is CEO of Israel Aircraft Industries North America and Chairman of the Board of IAI subsidiary Stark Aerospace, which is located in Columbus.

Fogelsong said he has flown with the Israeli Air Force and has been visiting the country for four decades, and while he was president of Mississippi State University he created many relationships with Israeli institutions. “I have deep roots in both areas,” he said.

He said Israel and the U.S. “are twins. Those things we value in the U.S. are the same things that are valued by our Israeli friends,” and he comes to that conclusion having visited 132 countries.

“In the security business, we’re twins,” he added, noting that he was at the Pentagon on Sept. 11, 2001, when the airplanes hit. The first phone call he thought to place was to counterparts in Israel because “we share common enemies.”

During the Israel trip, Bryant spoke at the Third International Israel Homeland Security Conference, and marveled at the thought of him speaking to Israelis on the subject. “I think they know more about homeland security than we may ever know.”

While in Israel, Bryant was scheduled to meet with Prime Minister Benjamin Netanyahu for 15 minutes, but it stretched to 40 minutes, much to the consternation of Netanyahu’s aides who were trying to keep him on schedule.

Among the benefits Mississippi has to offer are the most advanced warships on the planet being built in Pascagoula, 120 aerospace companies, agricultural research and advanced tele-medicine companies. Mississippi is in the top 10 in economic development and fifth in growth of woman-owned businesses.

Bryant said Mississippi is ready to share oil and gas expertise with Israel, as Israel recently began developing an industry around offshore drilling in the Mediterranean.

Every state has a different set of industries and different advantages, Dermer noted. “It’s very smart for the governor to be ahead of the curve and get Mississippi on Israel’s maps.”

Dermer added, “People would be surprised at some of the industries you have here. What Mississippi can offer will be different from Massachusetts and California and other states can offer. You need a tipping point where people get it and more and more companies come here. Then you have critical mass.”

When he was in Israel, Bryant went by booths for different defense industry companies and asked if they had a U.S. nexus. Many did not and were thinking they eventually would, so Bryant handed them his card. “When that company is ready to come to the U.S., I don’t want them going to Texas or California or Massachusetts.”

The summit began with a reception at Fairview Inn, where representatives from the different businesses could get to know each other.

Bryant, Aviran and Dermer gave remarks, during which Bryant noted the close personal relationships Aviran has developed in his time based in Atlanta, and proclaimed him an honorary citizen of Mississippi. Aviran’s time in Atlanta will end this summer and he will return to Israel.

As an example of the close ties that have developed, Secretary of State Delbert Hosemann said Aviran called him on Dec. 24 one year looking for dining suggestions in the area, unaware that there would be few restaurants, if any, open on Christmas Eve in Mississippi. Instead he hosted Aviran at his home for Christmas dinner.

Aviran reflected that his first visit to Mississippi was three weeks after arriving in Atlanta, when he addressed the Christians United For Israel event in Jackson in August 2010. “About 2,000 people came that night to support Israel, and it meant so much.”

MDA Trade Bureau Director Rose Boxx told the Israeli businesspeople “Mississippi can be your second home, like it is for Opher Aviran.”

Dermer also officially thanked the state for its hospitality in May 2014, when the Israeli Air Force had a joint training exercise with the Mississippi Air National Guard during Operation Emerald Warrior on the Mississippi Gulf Coast. He said Israel’s Air Force will return to the state later this year.

Bryant referenced the David and Goliath showdown in a valley. “Today Israel continues to be in valleys, but Mississippi is standing with you. It is my hope and the hope of all of us in this room that the United States will be in that valley when Israel needs us most.”

Dermer noted that many people have forgotten that Israel is an outpost of Western civilization in the Middle East, but Mississippi remembers.

He compared the Middle East situation to Wile E. Coyote and the Roadrunner. “He says beep beep and gets away. That’s what we’ve been doing for 67 years. We have to be a better roadrunner, a smarter roadrunner.

“To face these challenges we’ve had to be very good at what we do, and we are.”

Dermer explained how Israel had gone from “a small agricultural backwater to global technological power” with 42 of the top 50 tech firms in the world having research and development facilities there, “for many it is their only one” in the world.

Companies like HP and Apple aren’t in Israel because they are Zionists, he said. “They want to have access to the winning formula.”

An initial success story was water technology, because Israel didn’t have any water. Security expertise was born out of necessity, and now Israel has become a power in cyber. Despite a population of just 8 million, 11 percent of world investment in cyber last year was in Israel. “Israel in cyber is China,” Dermer said, punching at 110 times its weight.

But necessity isn’t enough to explain Israel’s success, Dermer said. He noted the phrase “people of the book,” and explained that Israel is a 67-year-old country “that is standing on the shoulders of a 4,000-year-old people” that has always pushed learning and education.

The Israeli military is “our MIT,” where elite thinkers and innovators are identified and given the freedom to go outside the box.

One advantage Israel has, Fogelsong noted, is “they are not as encumbered by regulatory guidelines.”

At IAI in Mississippi, Fogelsong said, the goal is to “take advantage of the strengths on both sides of the ocean.”

To that end, in his remarks during the summit’s luncheon Bryant brandished a well-worn copy of “Start-Up Nation,” Dan Senor’s book about “Israel’s economic miracle.”

Afterward, Bryant commented that the book’s message about “the ability to do great things” is something “I’m trying to instill in every Mississippian.”

As the one-on-one meetings wrapped up, Manning McPhillip, chief administrative officer of the Mississippi Development Authority, said he had heard great reports from the morning’s activities.

Dermer said the partnership can go in unexpected directions. A partnership can be developed in one area, then the Israeli partner may come up with an innovation in an area the company hadn’t considered before.

There were also sessions on procurement procedures for the Israeli Ministry of Defense, and how the BIRD Foundation funds industrial research cooperation between U.S. and Israeli companies.

Going to the Egg Bowl?

At the opening reception, Dermer remarked that he plans to attend an Egg Bowl, the annual football game between Ole Miss and Mississippi State, and he would no doubt be the first Israeli ambassador to do so. It isn’t far-fetched, as Dermer has a nephew attending Ole Miss. He did note that he would likely have to stay within walking distance of the stadium.

It being Mississippi, football was a common theme during events. After mentioning the Egg Bowl, Dermer referred to the rivalry game in Alabama, the Iron Bowl between Alabama and Auburn, stating Israelis were far more in tune with Iron Dome, the missile defense system.

Dermer instead proposed a neighbor swap — “We’ll take Alabama and give you Syria.”

After a moment of contemplation, Bryant said “Nah.”

Dermer responded, “you’ll do better in the Southeastern Conference,” to which Bryant said “That’s why I had to think for a moment.”

In concluding the opening reception, Mississippi musician Raphael Semmes performed “Mississippi Feels Like Coming Home,” after commenting that Mississippi is the birthplace of B.B. King. “Y’all also have a famous person named Bibi, but his last name isn’t easy to pronounce.”

Dermer responded that some people “call him king also.”