Dermer in Birmingham: Our ancestors would have traded for our problems 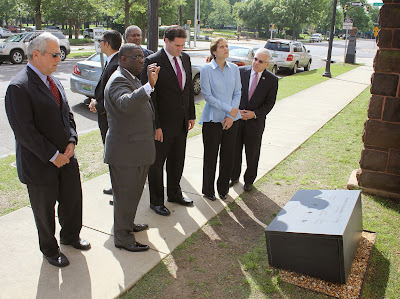 While news from the Middle East may be full of woe and conflict, Israeli Ambassador Ron Dermer took his time in Birmingham to urge people to step back and look at Israel in a different light — instead of pessimistically viewing the glass as “one-sixteenth empty.”

“Our ancestors would have given anything to trade their problems for ours,” Dermer said.

He said some Jews take Israel for granted because “if you’re younger than 75 you don’t remember what the world was like without Israel.”

During his April 28 talk at Temple Beth-El to a crowd of about 300, Dermer described the three gifts Israel has given to the Jewish people — the right of self-defense, a place of refuge and a sovereign voice in world affairs.

After 100 generations of wandering minority status subject to the whims of others, only three generations have had “the privilege to live at a time when there is a sovereign Jewish state.”

Dermer noted that Theodore Herzl, the founder of modern Zionism, was wrong about one thing. He felt the establishment of a Jewish state would end anti-Semitism because Jews were a minority everywhere and a majority nowhere.

Today, Dermer noted, some think anti-Semitism is a result of the Jewish state’s existence — a century ago the rallying cry for anti-Semites was “Jews, go to Palestine” while today it is “Jews, get out of Palestine.”

The old hatred of Jews has simply been turned toward the Jewish state, he explained.

The difference is that today, the Jewish people have the ability to defend against that hatred, he said. A world without Israel meant Jews were eternal victims. A world with Israel shows Jews refuse to be victims.

“Most peoples could not take a punch” like the Holocaust, losing one-third of their population. “The Jewish people have risen like a phoenix from the ashes and rebuilt their national life.”

Likewise, today nobody has to ask where a Jew facing anti-Semitism could go. “Unlike the past we don’t worry about whether this or that country will deign to take Jews in.”

That is also a benefit to Jews who choose not to move to Israel. “Appreciate what that choice means to you,” Dermer said. “You live in America because you want to, not because you have to.”

He said America’s greatest gift to the Jews is the hyphen between Jewish-American. “Throughout our history we have had to make a choice. You could be fully committed to your faith or you could be part of the broader society. In America a Jew could be a full partner.”

In discussing the Jewish voice in world affairs, he mentioned the recent controversy over Prime Minister Benjamin Netanyahu’s address to Congress, where he laid out opposition to a nuclear deal with Iran.

All peace-loving countries have a stake in keeping Iran from joining the nuclear club, he said, but Israel “has a special stake.”

Israel isn’t at the table for the 5 plus 1 talks with Iran, but 20 years ago when similar talks were going on with North Korea, the two nations with the biggest stake — Japan and South Korea — were.

While the controversy over Netanyahu’s remarks was framed in terms of him versus the White House, Dermer said Netanyahu spoke up “not out of disrespect” for President Barack Obama. “Israel speaks up because we have a moral obligation to speak against a country that threatens the survival of Israel.”

Israel has a “deep respect” for Obama, “for things he has done, some known, some less known and some that will never be known.”

Israel never wants to become a partisan issue, Dermer stated. “I am supremely confident our relationship will weather the current disagreement between our two governments,” and there have been worse disagreements in the past.

The U.S.-Israel relationship will grow even stronger in the years ahead, especially because of shared security challenges.

That said, Dermer stated the “very bad deal” being discussed with Iran virtually guarantees it will become a nuclear state. It will “trigger a nuclear arms race in the Middle East that would make nuclear terror a clear and present danger.” If Iran behaves for a few years it can join the nuclear club unconditionally, without any change in behavior.

Freeing up tens of billions of dollars in frozen Iranian assets will be used “not to build new medical centers in Tehran but to finance terror proxies around the Middle East.”

It isn’t just Israel that opposes the deal. “When Israelis and Arabs are on the same page, pay attention. That’s the ultimate no-spin zone.”

Israel does hope for a diplomatic solution, because if there is a military confrontation Israel would be the one paying the high price. But “we didn’t come back from the dead to let a bunch of ayatollahs wipe us out.”

The world is seeing the collapse of a 100-year order in the Middle East, carved out of the fall of the Ottoman Empire. Now, Dermer said, “militant Islam is charging into the void.”

At a reception before his talk, Dermer told supporters of the Birmingham Jewish Federation that he is a faithful reader of the Federation’s Update, a daily email newsletter, and has often shared items with Netanyahu.

“What you do here in Birmingham is really remarkable,” he said. Noting how the community stays informed and engaged, Dermer said “communities like this are part of the backbone of support for Israel.”

Dermer’s visit was announced and coordinated in less than two weeks, and Birmingham Jewish Federation Executive Director Richard Friedman, who originated Update, was already scheduled to be out of the country.

Dermer, a Miami Beach native, detailed extensive ties to Alabama, from a brother who attended Cumberland School of Law to a cousin who is a surgeon at the University of Alabama at Birmingham to a grandfather who played football at Alabama in the 1940s. “The first football pads I got were the ones he wore at Bama,” he said.

He added that he became a quarterback for Israel’s national football team, where he discovered that the key to becoming a great Jewish athlete is to play against fellow Jews.

He also mentioned how he was influenced as a student by Martin Luther King’s Letter from Birmingham Jail and King was a hero of his.

On April 29, he met with Mayor William Bell and then visited Sixteenth Street Baptist Church and placed a wreath at the spot where a Klan bomb exploded on Sept. 15, 1963, killing four girls.

He then went to Montgomery to visit the civil rights memorial before meeting with Governor Robert Bentley, where they discussed the Iron Bowl and Iron Dome, and further Alabama-Israel missile defense cooperation.