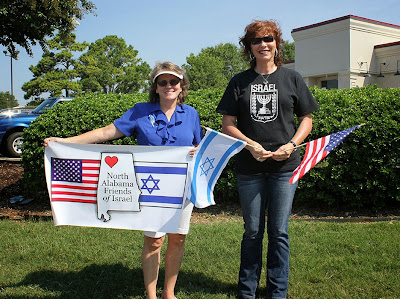 The four cities that make up Alabama’s Shoals area are entering into a sister city relationship with Beit El, Israel.

Over the last five weeks, the cities of Florence, Tuscumbia, Sheffield and Muscle Shoals approved resolutions recognizing the relationship.

In the Shoals area, Beit El will be referred to as Beth-El, the way the ancient community is spelled in most English translations of the Bible.

Located just north of Ramallah and 20 miles north of Jerusalem, Beth-El is a town of 6,000 built next to the ruins of Biblical Beit El, which is presumed to be the place where Jacob had his famous dream of a ladder to heaven and uttered the verse that became the “Mah Norah Hamakom Hazeh” (“How full of awe is this place”) prayer.

It was there that God made four promises to Jacob, including the continuity of the Jewish people, eternal claim to the land of Israel, and that the nations of the world would be blessed through Israel.

The town is also home to the Arutz Sheva news service, and a boutique winery whose vineyards are on terraces that date back to Second Temple times. There is also an olive oil factory in a cave, with production dating back to the First Temple.

Debra Barnes explained that the North Alabama Friends of Israel had been discussing the establishment of a relationship with an Israeli city for years. The process started moving forward in June 2014, when Mona Allen of Killen was visiting Israel. During a visit to Beth-El, city representative Judy Simon asked Allen “Have you ever thought about making us your sister city?”

A committee of eight members in the Shoals area worked with Beth-El Mayor Shai Alon to move the process forward. The mayors of the four cities asked the Shoals Chamber of Commerce to be the point organization to work on the request, under the leadership of Chamber President Steve Holt.

Sheffield became the first community to approve the relationship, at a March 23 City Council meeting.

Florence finished the process on April 21 with a unanimous vote.

The resolution noted that many from the Shoals area had traveled to Israel, and referenced the 1943 resolution of the Alabama Legislature calling for the establishment of a Jewish state in its ancient homeland.

The Shoals Beth-El Sister City Commission will be set up “to encourage cooperation among the five cities and to facilitate the sharing of expertise by involving appropriate individuals, groups and businesses in developing cultural, educational, technical and commercial exchanges.”

Simon suggested that the first initiative should be an e-pal program among children in the communities, as many sister cities have.

Barnes said plans are being formed to bring a small delegation from Beth-El to the Shoals area, and a trip for Shoals leaders to Israel is being planned for October.

A cultural event for the Shoals area is also being proposed, “where we can all learn more about the agriculture, commerce, art and music of Israel,” Barnes said.

The partnership is the second in Alabama with a community in the territories outside the pre-1967 border. Mobile has a sister city relationship with Ariel, a community that is also the focus of JR Israel, a leadership development organization based in Birmingham. Almost all sister city relationships with Israel are with communities inside the pre-1967 border. Birmingham’s sister city, Rosh Ha’Ayin, is just inside the Green Line.

Barnes explained they were looking to be “Biblically correct” instead of politically correct, especially because of the promise made to Jacob at that spot.