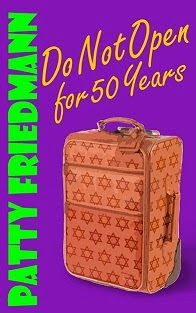 Many novels have a disclaimer that any resemblance to persons living or dead is purely coincidental.

With Patty Friedmann’s “Too Jewish” trilogy, not so much.

The New Orleans author releases the final installment of the trilogy, “Do Not Open for 50 Years” with a launch party at Garden District Book Shop on May 14 from 6 to 7:30 p.m.

She said the series is “unabashedly autobiographical” in dealing with parents who have a complicated relationship and her growing up feeling like an outsider in the New Orleans Jewish community.

The trilogy’s roots came after Hurricane Katrina, when Julie Smith was developing an anthology of short stories, “New Orleans Noir.” She asked Friedmann for a story, but Friedmann protested that dark fiction was not her genre.

After Smith continued to urge her to expand her repertoire, she started to think of what would be the darkest place in New Orleans, and she came up with Newman School, which she had attended. “I wrote a story about mean girls, and it turned out to be the most dark story in the collection,” she said. The story was “Two-Story Brick Houses.”

Smith saw the story as the launch point for a novel, but instead of carrying the story forward from the 1960s, she carried it backwards.

“The girl in the story had a father who was a Holocaust survivor, so I went back into his history… that became ‘Too Jewish’,” she said. She called it “the story I was probably put on Earth to write.”

Friedmann’s father was a Holocaust survivor who had escaped Nazi Germany, leaving his mother behind. He wound up in New Orleans, married to a fifth-generation assimilated native.

“Too Jewish” was her way of saying “look what you did to him.” Her father grew up in an observant family in Europe, then wound up in New Orleans attending Temple Sinai, where “I don’t think anyone knew Hebrew. He had to push aside all of his upbringing to fit in.”

Between his traditional upbringing and having his education cut off at the eighth grade by the Nazi regime, “his in-laws definitely thought he was unacceptable.”

Nevertheless, she did a presentation several years ago at Temple Sinai, which she marveled had changed quite a bit since her father’s time. “Everybody was really sweet to me,” she said.

Reaction to the books from some of her mother’s family was “we love you anyway.”

She felt that in “Too Jewish” she was going to say everything she had to say. “I got a lot out of my system with that book.” Her 1991 work “The Exact Image of Mother” became “Too Jewish: The Next Generation,” the second part of the trilogy, then “Do Not Open” “let me deal a little bit more with the father and a lot more with the mother.”

In “Too Jewish,” the mother was sympathetic, having grown up “spoiled to the point of being beaten down by it.” She was loyal to her husband — but as soon as her husband died, “she winds up back in the thrall of her parents” and goes back to being self-centered.

She calls it “an unusual Holocaust story. Here is a man who escaped one form of prejudice only to learn of prejudice that comes from his own people in the mid-century Deep South.”

As the books continue, there is also the exploration of a daughter who comes from “that sort of mixed marriage” who is also “an outcast in school,” where most of the Jewish kids go to Sunday School each weekend and view the few kids who go to the Conservative congregation and have Bat Mitzvahs to be less Jewish.

“Do Not Open” is set in recent times, as the daughter, Darby, has become a bestselling New Orleans author by writing about the tragedy of her father’s life.

The title comes from her father’s wishes to shield her from oral histories he did before his death in the early 1960s.

In “Do Not Open,” she feels ambivalence as her mother is missing after Katrina, her daughter returns from evacuating to Florida, bringing back a boyfriend who goes against everything Darby stands for in the second book.

While she struggles to get back on her feet after the storm, long-lost high school classmates resurface and want to reunite, despite their role in the death of Darby’s father decades earlier.

She is quick to explain one controversial passage in the new novel, where Darby slams the comparison of Hurricane Katrina to the Holocaust.

“I’m not making that comparison,” Friedmann said, but she has “personal autobiographical material that gives me a certain understanding” of a parallel.

Her father had left his mother behind in Europe because she did not want to believe what was happening, and he wrestled with survivor’s guilt. When Katrina hit, “I wouldn’t leave” but she sent her son — who was named for her father — to Houston, where he “cried for a week” until she was rescued.

After that, “for the first time I understood the whole mechanism of the relationship between my father and his mother,” she said. If she could speak to her father now, she would tell him that “a mother doesn’t think of anything but her son getting away safely, so you can forgive yourself” for leaving.

“There is no real analogy between the two large catastrophies,” she said, “but on the personal level there is that small connection.”

Friedmann is also the author of “Too Smart to be Rich,” “Odds,“ “Taken Away,” “No Takebacks,” “Pick-Up Line,” “A Little Bit Ruined: Eleanor Rushing Meets Hurricane Katrina” and “Secondhand Smoke.” Another recent novel, “Through The Windshield: An Extremely Dark Comedy” comes with a money-back offer if readers find it too disturbing.

She said “Do Not Open” closes out the story of Darby, “unless I want to live another 30 years, which I haven’t figured out yet.”