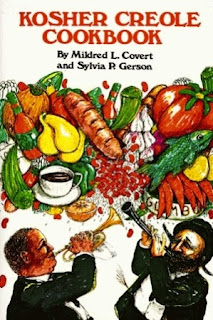 Wherever Jews have gone, Jewish cooking has become infused with local influences. In Louisiana, where the predominant ingredients are shellfish and pork, that can be a daunting challenge.

Mildred Covert, who died on May 10 at the age of 88, showed it was not an impossible mix.

A New Orleans native, Covert learned homemaking and cooking from her grandmother. With her strong Jewish background and love of New Orleans, she quickly experimented with melding the two worlds.

Covert and Gerson wrote the Creole book first, after repeated requests from friends for their recipes. It came out in 1982, followed by the Cajun cookbook in 1987 and Southern-style in 1993. The kid’s book came out in 1997, using recipes for kosher snacks and meals as part of the story of Hannah and Herschel, twins who sail up the Mississippi River with their grandmother.

The books were illustrated by Gerson’s son, Alan.

Maintaining a kosher home, Covert’s grandmother supervised Pearl Jones, who the family employed as a nanny, cook and housekeeper for 40 years. African-American and Jewish cooking fused in that kitchen.

Covert wrote about experiencing Yom Kippur break-the-fasts that started with Coca-Cola, then continued with fried chicken and brisket for meat meals, or Creole cream cheese and cheese grits with pickled herring and kugel if the meal was dairy.

Covert married a man who did not come from a kosher home, and after a failed attempt at red beans and rice by Covert, she decided to keep a kosher home, but quickly had to adapt recipes for some of her husband’s New Orleans-style favorites, such as gumbo without shrimp.

Covert introduced the greater New Orleans community to the concept of kosher cooking through her freelance columns in the Times-Picayune, weaving Jewish and culinary stories. She called her style of cooking “Creosher,” which was expanded back out to Kosher Creole by the cookbook publisher.

The Newcomb College Center for Research on Women honored her in 2004 for her work in defining how modern, observant Jews adapted their cooking methods to enjoy traditional southeast Louisiana cooking. As a local model and actress, she appeared in commercial work and as a guest star in the pilot episode of “Memphis Beat.”

She donated her papers to the Southern Food and Beverage Museum’s Culinary Library and Archive in 2013.

Aside from her writing, Covert was president of the Sisterhood at Beth Israel and was active on the Chevra Kadisha. She also was active in New Orleans Hadassah, the Jewish Community Center, Tulane/Newcomb Alumni Association and the Louisiana Arts and Crafts Council.

She is survived by her three children, Golda Spiers (Wayne) of Slidell, Susan Seiden (Jan) of Miami and Martin Covert (Cecile) of New Orleans. She is also survived by grandchildren Adam Stross (Michele), Sarah Covert (Seth Knudsen), Jeffrey Seiden (Brenna) and Maggie Covert (Tim LeBlanc), along with two great-grandchildren, Aaron and Shaya Stross. Also surviving are her sister, Celia Katz, and her brother, Abe Daniel Lubritz. She was the half-sister of the late Ennis Kops.