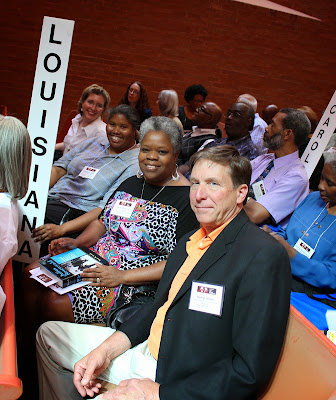 Chandra Lester, Kathe Hambrick-Jackson and Darryl Gissel were in the Louisiana delegation to the first Rosenwald Schools conference, held in Tuskegee in 2012 (SJL file).

“Rosenwald,” a new documentary by award-winning filmmaker Aviva Kempner, will have its premiere in New York in August, but there will be a chance to preview it in Louisiana next month.

The River Road African History Museum in Donaldsonville will host a free screening of the documentary on June 2 at the Manship Theatre in Baton Rouge. The free 7 p.m. screening will include a discussion led by retired Louisiana State University Professor Thomas Durant on the lasting social impact of the Rosenwald Schools and their relevance in enhancing schools and communities today. Reservations can be made here.

“Rosenwald” is the story of Julius Rosenwald, who never finished high school but rose to become the president of Sears. Influenced by the writings of educator Booker T. Washington, this Jewish philanthropist joined forces with African-American communities in the Jim Crow South to build over 5,300 schools in rural areas during the early part of the 20th century.

Rosenwald put up seed money to build these schools using standardized designs, as long as the local community took an active role, whether through fundraising or participating in the building process. With desegregation in the 1960s, most of the buildings fell into disuse, and today few remain. There is an active campaign to restore those that are left into educational facilities or community centers.

For the River Road museum, which recently had to cut its hours for the first time while grappling with a funding shortfall, the film is particularly significant.

Museum Director Kathe Hambrick-Jackson learned years ago that the Central Agricultural Schoolhouse, also called the Romeville School, was slated to be torn down by the St. James Parish school board. Because it was “the cornerstone for educating African American children in St. James Parish” from the 1930s to the 1960s, she got the board to donate it to the museum in 1996.

Only after moving the building to Donaldsonville did she realize that it was a Rosenwald School, one of the few remaining in Louisiana. In 2013, the museum was able to start renovations on it and held a dedication with the great-granddaughter of Booker T. Washington as guest speaker.

The museum is just two blocks from Donaldsonville’s Jewish cemetery and three blocks from the Ace Hardware store that now occupies what was Bikur Cholim Synagogue.

The first Rosenwald school in Louisiana was constructed in 1916. Almost 400 were built in Louisiana by 1932, and by then one in four rural black schools in the state was a Rosenwald. The Romeville School was built in 1931.

Currently, only two other remaining Rosenwalds have been identified in Louisiana, including one in Plaisance, in St. Landry Parish.

After the New York premiere, “Rosenwald” will open in major markets. A September screening is scheduled for Birmingham. Before its release, it is scheduled at major Jewish film festivals and at the 106th NAACP national convention in July. Rosenwald was an early supporter of the NAACP. Kempner and Julian Bond will make a presentation after the screening.

“Rosenwald” won the 2015 Lipscomb Ecumenical Prize at the Nashville Film Festival, which is awarded to directors who have succeeded in portraying actions or human experiences sensitizing viewers to spiritual, human or social values.

The film will also screen at the National Trust for Historical Preservations’ Rosenwald School Annual Meeting in Durham, N.C. in June. Once home to the largest number of Rosenwald Schools, North Carolina is rich with Rosenwald School restoration and rehabilitation activities.

The first Rosenwald School conference was held at Tuskegee University in Alabama in 2012.