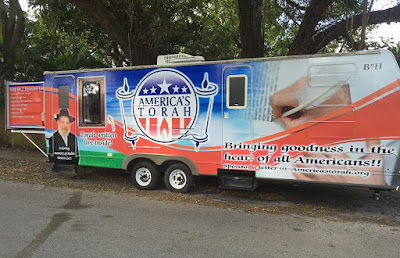 Update: As of the morning of June 1, America’s Torah is postponing its Alabama part of the trip and will likely be in the state in July. We will update as we get more information.

“America’s Torah” will be rolling through the Florida panhandle and Alabama this week as part of a planned two-year, 50-state journey.

The Torah caravan will be at Chabad of the Emerald Coast in Destin on May 31 at noon, then will be in Mobile, in Montgomery on June 1, Birmingham on June 2 and Huntsville on June 3. On June 5 they will arrive in Atlanta.

Israel Labkowski said the impetus for writing the Torah began on Aug. 9, 2014, when his father-in-law, Rabbi Joseph Raksin, was shot to death in broad daylight while walking to Shabbat services in North Miami Beach. There still has not been an arrest in the case.

He noted the tradition of writing a Torah scroll in memory of someone who has died as a legacy of that person, and after talking with family and friends he decided that “the only way that I could truly honor my beloved father in law’s righteous legacy and the blatant injustice done to him was to express to the world that which was absent on that Saturday,” a message of respect and unity “to all cultures, religions and races.”

One component of the trip is writing a Torah in an RV in all 50 states, which Labkowski said is a first. “The Raskin Torah March” is expected to conclude in Washington.

Individuals or groups can sponsor letters in the Torah at $18 each, in person or online.

The other part, the universal message, is to spread word of the Seven Noahide Laws, which Judaism teaches is the moral code that God expects of all humanity. They plan to visit with mayors, city leaders, schools, police and fire departments, spreading “a message of peace and respect among humankind” based on the Noahide laws.

Because of Raskin’s murder, they especially want to visit with law enforcement. “We need to support our police… what is happening in Baltimore and what happened in Ferguson is not acceptable,” and it is necessary to “emphasize how important they are in our society.”

When they visit with police, they collecting pins that are going on a large flag, and Labkowski hopes to present the flag and pins to the president when the journey is completed.

On June 2 they will meet with the Sheffield Fire Department, and on June 3 they are scheduled to meet with Huntsville Police.

Other visits in Alabama have not been finalized, but Labkowski said they welcome the opportunity to visit with congregations, groups, civic leaders. “We try to put together one event” in a city, then “the rest of the day they will go and meet people, free-lance.”

Anyone interested in a visit should contact them, he said, and assistance in making arrangements with local police departments is especially welcome.

The journey began on March 1 at the spot where the murder took place, then the RV headed to Key West to start the national tour.

In recent days, the tour has been to Florida State University, the Gainesville Police Department and Torah Academy in Jacksonville. In Orlando, the mayor proclaimed May 21 as the Raskin Torah March Day.

Even a mechanical breakdown is seen as a blessing, because they met someone Jewish at a tire store and gave him the chance to put on tefillin.

After heading up the East Coast this summer, the RV will head West and South in the fall, perhaps visiting Mississippi and Louisiana then.

In light of what happened to Raskin, Labkowski said, “we plan on setting an example to the American society of how a person should react to an injustice. Instead of focusing on the negative, we must focus all our strength on the positive influence by being ‘a light unto the nations’.”

Rather than just talking about a more peaceful world, he sees this journey as a way of “getting out there and doing it.”