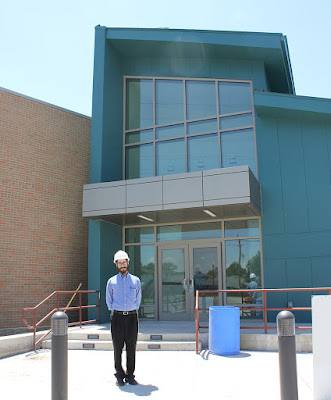 Rabbi Kerendian in front of Torah Academy in the summer of 2014, a month before the new building opened.

Rabbi Michoel Kerendian, who became the executive director of Torah Academy in Metairie in October 2013, will leave the school effective July 31.

In an email to the Torah Academy community on June 19, Kerendian stated that the school’s board has decided to do some restructuring, including “the temporary dissolution” of the executive director position. His duties will be distributed among several others at the school.

The school just completed its first year in a new building, located at the site of its pre-Katrina building. After the levees broke in August 2005, the building was damaged beyond repair and the school re-opened in temporary quarters.

Delays with permitting and FEMA funding meant that construction on the new facility could not begin until August 2013.

The school ranges from a two-year-old preschool class to eighth grade.

Kerendian said during the last two years, “we have made incredible strides in improving education, enrollment, and organizational sustainability. Not only has it been gratifying and enjoyable, but most importantly it has resulted in a better school for our children and for our community.”

He will continue to work with the school “to make this transition as smooth as possible” and move back to Chicago in August.