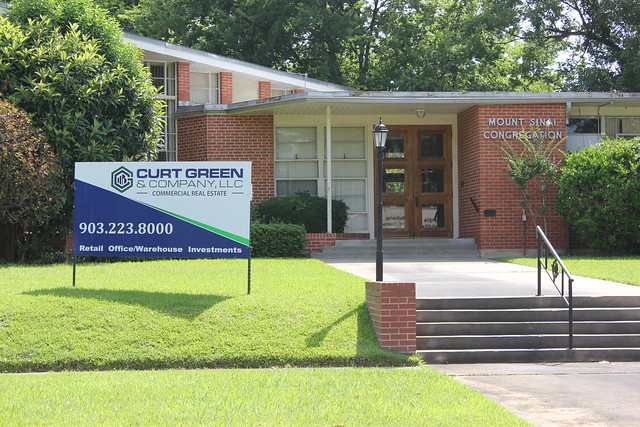 Above: Facing dwindling numbers and not having had any events in over a year, members of Mount Sinai Congregation in Texarkana officially shut the doors and listed the property for sale.

Two regional Jewish singles weekends are upcoming — in Austin this month and Memphis in August.

In Houston, a non-Jewish single mother had moved to a new home just before the Memorial Day flood, not realizing it was a largely Jewish neighborhood — and found “over 300” of her Jewish neighbors rallying to her aid after her house was flooded and they had lost everything.

The New York Jewish Week has a piece on the Rise and Fall of JONAH, the Orthodox-oriented group that claimed to “heal” homosexuality but was just found guilty of fraud in a suit that was brought by Alabama’s Southern Poverty Law Center.

Touro Synagogue in New Orleans is livestreaming its services. The full service will be available for a week and the sermons will be available beyond that. Livestreams from the Forgotson Chapel are here and from the Main Sanctuary here.

Shira Moskowitz writes how Jewish summer camping got her to move to Mississippi.

High Holidays time? Agudath Israel-Etz Ahayem in Montgomery is selling “Honey from the Heart,” in cooperation with ORT. Cost is $11 per jar, and shipping is free if ordered before July 13.

Fundraising continues for Houston’s Jewish community in the aftermath of flooding. In New Orleans, the Force family did a $2,000 gift in honor of Morton Katz’s presidency of the Jewish Federation of Greater New Orleans. Another match of up to $25,000 by the Goldring family and Woldenberg Foundation was announced. The Federation and Jewish Endowment Foundation of Louisiana also sent $5,000. NECHAMA and All Hands are looking for volunteers to assist with cleaning, packing and addressing needs of those affected by the flooding. To volunteer, contact Michael Kahlenberg at (281) 630-4926 or email. To contribute, click here.

The Reform movement’s Greene Family Camp in Texas will have a 40th anniversary and reunion the weekend of July 10.

After two decades of growing roses, Mobile’s Bernie Malkove has donated most of his bushes to the Mitchell Cancer Center.

You Belong in Birmingham will have several activities in July. On July 12, there will be a brunch at Jackson’s in Homewood at 11 a.m., with participants asked to bring a new or gently used children’s book up to third grade level for the Hess Family Library at the Levite Jewish Community Center. A volunteer reading opportunity is available with the preschool on July 22. The YBIB Summer Party will be at Cantina in Pepper Place, July 16 from 5:30 to 7:30 p.m. There will be margaritas and appetizers, along with Cantina’s happy hour specials. Guests are welcome.

Springhill Avenue Temple in Mobile has named Rabbi Dana Kaplan as interim rabbi for the coming year, starting Sept. 1. He will also be in Mobile from July 7 to 20 and Aug. 11 to 24.

Eva Wilensky will be teaching Mah Jongg at Temple Beth-El in Birmingham for four Mondays, starting July 6, at 9:30 a.m. There is no charge for Sisterhood members, $5 for non-members.

Chabad of Mobile will hold a Jewish Learning Institute course, “Justice and the War on Terror,” July 22 and 29 at 7:30 p.m. at the Hampton Inn on Providence Park Drive. The two sessions, “Negotiating With Terror” and “Torturing to Save Lives” are CLE accredited.

Diamonds Direct in Birmingham will have a Designer Showcase on July 10 and 11 from 10 a.m. to 8 p.m., and July 12 from noon to 6 p.m., with 20 percent discounts and access to some of the industry’s top designers. On July 10 there will be cocktails and hors d’oeuvres from Vecchia from 5 to 7 p.m.

Montgomery’s L’chaim League will have a program with Raymond Cohen speaking about the life of Nat King Cole. The July 14 luncheon will be at Temple Beth Or at 11:30 a.m., featuring soul food from Down the Street Café. Reservations are $10 per person and are due on July 11.

On July 10, Beth Shalom in Fort Walton Beach will welcome Rabbi Joel Fleekop and members of Temple Beth-El in Pensacola for Shabbat services at 7:30 p.m. Beth-El is currently undergoing a major renovation (above) and is currently meeting at First United Methodist Church most weekends.

B’nai Israel in Panama City will have Havdalah on the Beach, July 11 at 6 p.m. at Richard Seltzer Park.

Hadassah of Baton Rouge and The Red Shoes Center for Personal and Spiritual Growth are partnering for an inspirational retreat featuring Rabbi Yael Levy. “Sabbath of Psalms: A Deep Yearning” will be held July 17 and 18. It will be an interfaith exploration of the Psalms under the structure of Shabbat. The weekend begins at 6 p.m. on July 17 with Shabbat dinner, followed by teachings, reflection, meditation and song. The sessions on July 18 will be from 10 a.m. to 4 p.m., with prayer, guided meditation, Torah and Psalm study. Registration is $50, including dinner and lunch. Levy is director of “A Way In: Jewish Mindfulness Center” and author of books on the Omer and Chanukah. The rabbi at Congregation Mishkan Shalom in Philadelphia, she was also named by the Forward as one of America’s most inspiring rabbis.

The North Louisiana Jewish Federation’s annual meeting and dinner will be July 15 at 6 p.m. in Lefkowitz Hall at B’nai Zion in Shreveport. Reservations are required by July 7.

The Chabad Jewish Center in Metairie will host “Toward a Meaningful Life: A Soul-Searching Journey for Every Jew,” led by Rabbi Mendel Ceitlin. The free course meets for four Wednesdays, starting July 8, at 7:30 p.m. Topics will be Body and Soul, Birth and Childhood, Home and Family, and Work and Productivity. Each is self-contained, so one need not attend all sessions. No background knowledge or affiliation is necessary.

The Bart Family Film Series is back this July at the Uptown JCC in New Orleans. The first film, Gett: the Trial of Viviane Amsalem, was on July 7. “Ida,” the 2015 Academy Award winner for Best Foreign Language Film, is the July 14 film. Described by Keith Turan of the Los Angeles Times as “a film of exceptional artistry, whose emotions are as potent and persuasive as its images are indelibly beautiful,” “Ida” is an intimate drama about a young novitiate nun in 1960’s Poland. On the verge of taking her vows, she is shocked to learn that her parents were Jewish and had been murdered during the Nazi occupation. This discovery leads her on a journey into her own past, evoking the legacy of the Holocaust and the realities of postwar Communism. The 7 p.m. film is free and open to the community. Popcorn and movie snacks will be served.

Shir Chadash is holding its annual Nearly New Sale. The sale offers a wide variety of items including fashions for the entire family, housewares, furniture, art, books, toys and more on July 12 to 14, from 10 a.m. to 2 p.m. at Shir Chadash in Metairie. There will also be a half-price sale on July 19.

Chabad of Mississippi will have a program on the History and Mystery of the Holy Land, July 22 at 7 p.m.