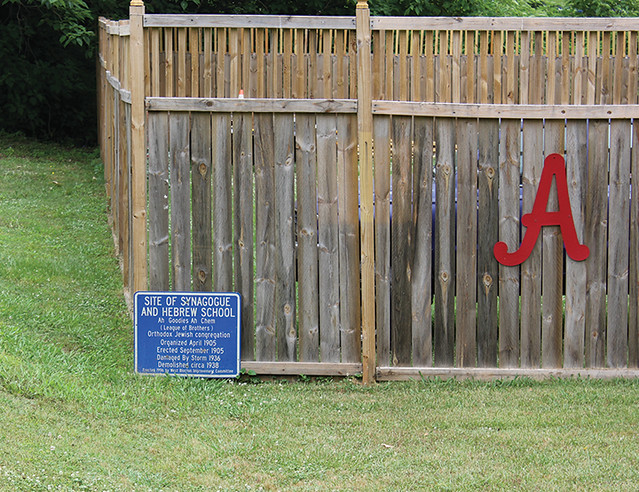 Congregation Ah-Goodies Ah-Chem in West Blocton may have closed 80 years ago, but it will continue to have a legacy of Jewish learning.

The lot where the synagogue once stood and where an historic marker was dedicated in 1997 has been sold and the proceeds are going to the University of Alabama to establish a support fund for students in financial need who are minoring in Judaic studies.

The Jewish community of West Blocton started around 1881, and in 1905 the congregation organized, using a phonetic spelling of Agudas Achim. They built a simple white building on Main Street in 1905.

The synagogue had one of the first tennis courts in the county. The community peaked soon thereafter at 125 individuals, starting to decline in the 1920s.

Soon, services were held only on High Holy Days, with attendance boosted by University of Alabama students who were recruited by cousin Melvin Israel, a fellow student who later became a sports radio announcer for Alabama and went on to become Mel Allen, the legendary voice of the New York Yankees. The synagogue was damaged by a storm in 1936, then by fire, and with the community down to 15 people a decision was made not to rebuild. The building was demolished in 1938, with the ritual items given to Birmingham’s Knesseth Israel.

Janet Beerman, great-granddaughter of Wolf Israel, one of the congregation’s founders, said her great-grandfather lived across the street from the shul and her grandfather, Samuel Israel, lived next door. Wolf was also founder of the I and N Quality Store, which now houses the Cahaba Lily Activity Center. When Wolf died, Sam became caretaker of the synagogue property next door, a job he later handed over to his son, Elmo Israel Ellis, who became a radio legend in Atlanta. After Sam died in 1967, his home was sold to the mother of Tammy Donner, and now belongs to Tammy and husband Gary Donner, who has been fire chief and mayor of West Blocton.

Every so often, Donner would contact Ellis, and after Ellis’ death, Beerman, asking to purchase the synagogue property next door. “Out of the goodness of their hearts, they were maintaining the lot, mowing down the weeds, keeping watch over it,”

Beerman said. “Understandably, the Donners were willing to pay the going rate for property on Main Street in West Blocton.” But Ellis had instructed his daughter not to sell the property for less than $10,000, “which was several times greater than West Blocton real estate was bringing.” A couple of years ago, Tammy contacted her again, and Beerman replied “Tammy, I’d love to sell it to you, but I promised my Daddy, on his death bed, that I wouldn’t take less than $10,000 for it.”

Tammy said she understood, but Beerman could hear her disappointment. “Ten minutes later the phone rang again. This time it was Gary. He said, ‘Miss Janet, we’ll give you $10,000’.”

It took some time for Beerman to establish clear title to the property, and part of the sale condition was that the marker would remain.

Gary Donner told SJL that though the marker is currently down from its original pole, he plans to have a waterfall on the property with the sign placed on it.

With the proceeds from the sale, Beerman looked for a naming opportunity to keep the congregation’s name alive. She contacted Knesseth Israel and spoke with Rabbi Eytan Yammer about the items that had been given to the Birmingham congregation in the 1930s. Yammer noted there was an old Torah in poor condition that they did not know any history about, and she thought restoring that Torah, which they figured came from Ah Goodies Ah Chem, would be a fitting tribute.

But while the property title issue dragged on, KI went ahead and did a restoration of its Torahs.

Beerman then contacted the University of Alabama and found out why her father had insisted on $10,000 — it is the minimum amount needed to establish a named fund.

“Kathy Yarbrough, the University’s Director of Development, came to my home in Atlanta and helped me sort through all sorts of options,” she said. Beerman and her brother, “as Representatives of the Successors of John Krentzman, Wolf Israel, and Sam Baer,” established the Ah Goodies Ah Chem Synagogue of West Blocton, Alabama Support Fund.

The earnings from the sale proceeds will pay an annual award, in perpetuity, to a student who has chosen to minor in Judaic Studies. The financial assistance will go toward books and other study needs.

Another West Blocton landmark with ties to the community’s Jewish history is being dismantled.

Charles Adams, who organized the 1997 marker dedication for the synagogue, said heavy rains in November led to an exterior wall of the Masonic Lodge sloughing off. Because there are no funds for repair, a demolition company is taking the building down for the bricks and other building materials.

Adams noted that the cornerstone, which lists Sam Israel as a member of the building committee, will remain and in the near future there will be a ceremony to open it.

The 1900 Episcopal Church was recently dismantled, an old bank building caved in and the company dismantling the Masonic Lodge wants to do the Strand Theater next. “It really hurts to see the old town landmarks disappear,” he said.

One story told about the Masonic Lodge has to do with a large portrait of Sam Israel that was dedicated in the 1950s. As family members came to tour the building, the person conducting the tour noticed that Israel’s portrait was placed facing a large portrait of Jesus and worried how that would be received. According to the story, Ellis reassured him, “that’s fine, after all, they were brothers.”