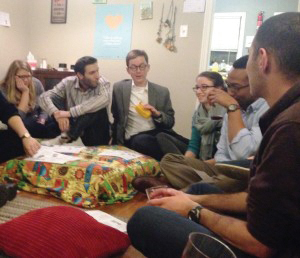 In larger communities across the country, including New Orleans, Moishe House has set up a presence with Jewish 20-somethings living together and providing a “hub of Jewish life.”

But what about smaller communities that can’t sustain a full-fledged residence? In Jackson, Moishe House Without Walls debuted a few months ago.

Lonnie Kleinman, the Institute of Southern Jewish Life’s first Community Engagement Fellow, became a MHWOW host by virtue of having studied for a year at the Pardes Institute of Jewish Studies in Jerusalem.

Alumni of resident Moishe Houses, retreat participants and select others are eligible to become MHWOW hosts. Though Kleinman is the local host, she said in Jackson it has been “more of a collaborative effort” with a “good number” of young Jewish adults in the area.

In February, Kleinman and Arielle Nissenblatt hosted a Tu B’Shevat Seder with a discussion about sustainability.

They plan two events per month — a monthly Shabbat dinner and an event that changes month to month. For example, for Purim they did hamantaschen baking, an event that was sponsored by Jackson’s Beth Israel Congregation.

“Beth Israel has been awesome, they called us and want to support us,” she said.

Kleinman said the goal isn’t just to “give young Jewish adults in Jackson a chance to get together… but also make these events open to the public so our friends are exposed to Jewish holidays and events.”

She is also looking for ways that MHWOW can do some community engagement, which is also what she does at ISJL.