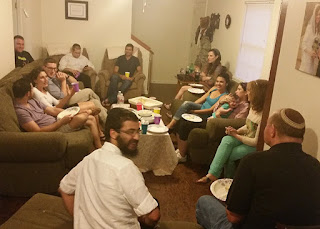 Above: The Jewish Young Adults of North Louisiana recently had a Shabbat gathering with two visiting Chabad “roving rabbis.”

A family in Prairieville, La., has a theme birthday party for their two-year-old — featuring New Orleans attorney Morris Bart. Apparently, their boy is mesmerized by his “one call” commercials.

The Lafayette theater shooter wrote about how blacks in the U.S. are part of an “alliance of evil” destroying the country, a role that he also said is usually played by Jews in the rest of the world. But he admired Latinos and Muslims.

In response to the church shooting in Charleston, the United Synagogue Youth chapter at Synagogue Emanu-El has a Be Kind for the 9 initiative, urging 9,000 mitzvot in their memory with an online campaign.

The Reform movement is joining with the NAACP on an historic civil rights march that will start at the Edmund Pettus Bridge in Selma at 11 a.m. on Aug. 1 and go to Montgomery, Atlanta, Greenville, Charlotte and Richmond before ending in Washington. A State Rally for Economic Equality is planned for Aug. 3 at 9 a.m. in Montgomery.

The “Jewish Olympics,” European Maccabi Games, kicked off in Berlin, in an amphitheater Hitler built. Among the athletes competing is Jarrett Kaplan of Huntsville.

Demonstrations in Beit El, the Shoals’ sister city, as buildings with controversial legal status are demolished, though the government approved construction of 300 housing units, which the U.S. government is “deeply concerned” about.

Presidential candidate Mike Huckabee of Arkansas said Obama is so trusting of Iran that he’s basically marching Israelis to the door of the oven, and has responded to criticism by saying the reaction from the Jewish community to his controversial remarks has been overwhelmingly positive. Rabbi Barry Block of B’nai Israel in Little Rock says that’s not what he has been hearing.

Marcie Cohen Ferris will be at a Legacies and Lunch program on Aug. 5 at the CALS Ron Robinson Theater in Little Rock. Co-hosted by the Butler Center for Arkansas Studies and the Clinton School of Public Service, Ferris will talk about the power of food to nourish cultures as well as people’s bodies and the way it helps people understand the South — from scholars and chefs to casual consumers and hardcore foodies. Ferris’ recent book, “The Edible South,” will be available for purchase, and Ferris will sign copies after the noon talk. The program is free and open to the community.

The New Orleans Voodoo will be part of Jewish Heritage Night — but it’s an away game, at the Philadelphia Soul on Aug. 2.

On Tisha B’Av, the Oklahoma City Jewish community gave a proper burial to the skull of a Holocaust victim.

A teacher from Dutchtown High School in Geismar, La., was one of 25 teachers chosen to participate in the Holocaust and Jewish Resistance Teachers Program in Europe this summer.

Registration is open for the inaugural Dallas Kosher BBQ Championship, to be held on Oct. 25.

Rabbi Jonathan Miller will speak about the Iran agreement during services at Birmingham’s Temple Emanu-El this Shabbat, July 31 at the 5:40 p.m. service. Miller and Alan Engel represented Birmingham at a gathering of the American Israel Public Affairs Committee’s National Council in Washington, where they were briefed and met with Members of Congress. The service will also be a You Belong in Birmingham gathering for the community’s young adults, with cocktails at 5:15 p.m. and dinner following the service.

Mobile’s Springhill Avenue Temple will have Men’s Club Shabbat on July 31 at 6 p.m., and Sisterhood Shabbat on Aug. 7 at 6 p.m. The Sisterhood service will be led by members from the Eastern Shore. Services will be followed by an evening of beer, bingo and burritos. Dinner is free, bingo cards are $1.

The Men’s Club at Temple Beth Or in Montgomery will have Biscuits Day at the ballpark, Aug. 9 at 5:30 p.m., in the Aronov suite. Reservations are required, and are $15.

The eighth annual Temple Beth-El Poker Tournament in Pensacola will be on August 15. Due to renovations, the event will be held at 917 North Palafox. Doors will open at 5:15 p.m. and no-limit hold’em play begins at 6 p.m. The buy-in is $100 for the first 100 who pre-register, or $110 at the door. Re-buys of $100 are taken until 8 p.m. Registration and re-buys are for $3,000 in chips, and there will be a one-time add-on of $5,000 in chips at 8:15 p.m. for $100. There will be free food and a cash bar. The top nine players will receive non-monetary prizes, with first place being a Large Green Egg and second place being a flat-screen television.

Dealing with stress and emotions connected to the 10th anniversary of Hurricane Katrina? Jewish Family Service of Greater New Orleans will host a reflection and discussion, on Aug. 5 and 12 at noon, at the Metairie office. Groups will be led by Stephanie Crowder, LPC, LMFT and Chenoa Moten, Social Work Intern. Participation in both sessions is encouraged, and both group sessions are free and open to the Jewish community. Light refreshments will be served, and reservations are required.

Instead of his usual sermon, Rabbi David Polsky of Anshe Sfard in New Orleans will lead a text study on Aug. 1 during the 9:15 a.m. Shabbat service, discussing this week’s stabbing at a gay pride parade in Jerusalem, and the “price tag” arson that claimed the life of an 18-month-old Palestinian.

Aleeza Adelman announced she will no longer be on faculty at the Jewish Community Day School in Metairie, as she will be the Director of Jewish Enrichment for BBYO.

Basic J, the Introduction to Judaism course at Gates of Prayer in Metairie, will begin on Aug. 5 at 7:30 p.m. and continue on Wednesdays through the year. The course is taught by Rabbi Bob Loewy and Rabbi Alexis Pinsky, and is open to all interested in learning primary beliefs and practices in Judaism, especially those interested in being supportive of a Jewish family or conversion.

B’nai Zion in Shreveport is holding a summer film series following the 6 p.m. Shabbat services. Pizza, popcorn and drinks will be served, and each film has a Judaic tie. Admission is free, but donations are appreciated before or after Shabbat. The 1977 classic “Oh, God!” will be the July 31 film.

The Chabad Center in Metairie will have a Hebrew reading crash course for beginners, starting Aug. 2 and running for six Sunday mornings.