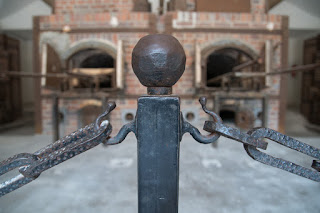 The crematoria at the Dachau concentration camp, pictured during a stop on the July 2015 European Holocaust tour of the Alfred Lerner Fellowship for Holocaust educators. Credit: Kelly Webeck.

When Kelly Webeck visited Nazi Germany’s former Chelmno extermination camp in Poland as part of the July 2015 European Holocaust tour of the Alfred Lerner Fellowship for Holocaust educators, she entered the small museum that stood in the center of the camp’s ruins and came across a sewing machine in one of the display cases.

Dutch Holocaust historian Robert Jan van Pelt, who guided the school teachers participating in the tour, described the sewing machine as an object that concentration camp prisoners chose to bring with them because they still had hope.

“You bring a sewing machine because you actually believe you’re going to sew again someday,” said Webeck, a community art educator in Houston, who recounted how after seeing the machine, “I had to leave [the exhibit]. It was too much for me.”

That moment is symbolic of the impression the Lerner fellowship, which is organized by the Jewish Foundation for the Righteous (JFR), leaves on teachers like Webeck.

“We’re not talking statistics here, 6 million, X number of Jews, X number of POWs,” said Amy McDonald, a fellowship participant who teaches history and an elective course on the Holocaust at Shades Valley High School in Birmingham, Ala. “What it boils down to is the tragedy of each individual life and each family.”

For the annual fellowship, JFR—which in 2014 awarded $1.7 million in support funds to non-Jews who saved Jews during the Holocaust (individuals who are known as righteous gentiles)—selects 30 middle and high school English or social studies teachers from the U.S. and other countries who already teach about the Holocaust. As part of the program, the teachers first participate in an intensive summer institute at Columbia University in New York City. 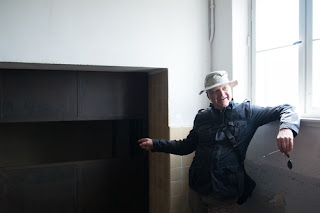 Dutch Holocaust historian Robert Jan van Pelt addresses school teachers at an elevator within the crematoria at the Buchenwald concentration camp, during a stop on the July 2015 European Holocaust tour of the Alfred Lerner Fellowship for Holocaust educators. Credit: Kelly Webeck.

At the institute, which was held in June this year, the teachers attend lectures by noted Holocaust scholars and then break into small groups to share their thoughts and develop new approaches to teaching the Holocaust. JFR fellows can also participate in a subsequent advanced seminar and join a two-week tour of European Holocaust sites.

Since Holocaust education is not mandated in most U.S. states, the Lerner fellowship gives teachers more of “the grounding and the history, so that they can go back and present the subject to their students in the appropriate manner,” said JFR Executive Vice President Stanlee Stahl.

While JFR does not ask about participants’ religion in the application process, most teacher fellows have been non-Jewish, as is the case for all of the fellows interviewed in this story. McDonald, who is Christian, went on the 2015 Europe trip. She said she has always been interested in the Holocaust and World War II, but that her experience in the summer institute left her “in awe” of the “rich and complex” content presented and the opportunity to learn directly from renowned historians.

“It helped me uncover what I felt my passion was when it comes to education,” said McDonald.

On this summer’s Europe trip, McDonald was particularly moved by a visit to Tykocin, Poland, which had been a typical Eastern European town in the late 1930s, inhabited by Christians and Jews, until it was occupied by Germany in 1941.

“We walk out and we stand on this square where, on that particular day at the end of August in 1941, the Jews of this small town, approximately 1,400, were suddenly told to assemble in the market square,” McDonald described. “We are told how they are marched a mile or two down the road to an old school building where they spend the night. As a group, we get back on our bus and drive the mile or two down the road to this forest, and we walk in silence down into the depth of the forest, where we turn to these three mass graves.” 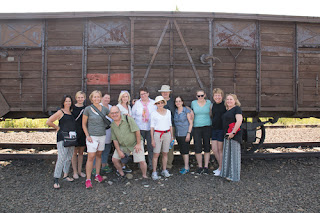 Participants of the July 2015 European Holocaust tour of the Alfred Lerner Fellowship for Holocaust educators pose in front of a railcar outside of the Auschwitz-Birkenau concentration camp. Credit: Pawel Sawicki.

In Birmingham, McDonald teaches in a city where the Jewish community is fairly small and her students have little background on Judaism. Since her school’s student body is in a low-to-middle income bracket, few of her students have the chance to travel to Holocaust sites themselves.

Yet the students are “incredibly touched” by hearing testimony from the visits of the six or seven Holocaust survivors who still live in the Birmingham area, said McDonald. She said they “see these Holocaust survivors as true heroes. In today’s world I don’t know that students really have heroes anymore.”

Webeck said that from her perspective, the Holocaust is primarily “a human history and not a Jewish history.” She has written a Holocaust education curriculum based on a collection of photos that she compiled for the Holocaust Museum Houston. The photos are portraits of Houston-area Holocaust survivors and still-life images of their residences. Webeck created a lesson plan based on the story of each survivor.

When students look at the photos, they think about how the survivors “choose to keep that particular part of their lives, that aspect of their history, present in their homes,” Webeck said.

Webeck regularly gives these lessons in the high school classroom of another teacher who participated in the Lerner fellowship, and she has used the photos in various seminars for other teachers. Her experience at the fellowship’s summer institute left her with some written sources that she plans to incorporate into her curriculum going forward, such as Alexandra Zapruder’s “Salvaged Pages,” a collection of teenagers’ diaries from the Holocaust.

After taking the fellowship’s European tour, which is chronological, Webeck also wants to rearrange her photo lessons into a chronological pattern and tell the history based on where the survivors in the portraits had lived. Since Webeck took many new photos during the trip this summer, she intends to supplement her teaching materials with contemporary images of the places where the Holocaust survivors in her lessons lived. She said that will allow her students to “see that it’s a real place, with real color and real structure.”

History teacher Frances Kennedy, a Lerner fellow who attended this summer’s Europe trip, said she can now add “that I have been there, I have experienced it… [By] seeing what I’m actually teaching about, I’ll be able to personalize it.”

Kennedy, who is Christian, has been teaching for 33 years and currently works at William T. Dwyer High School in Palm Beach Gardens, Fla. Thirteen years ago, she founded an elective course on the Holocaust that initially had 30 students. Today, she teaches five classes with a total of approximately 170 students.

“I wasn’t born long after the war,” she said. “This was my parents’ generation’s war, so I grew up just very aware of it, and it was always a passion of mine. As I went further into history, [teaching about the Holocaust] became more and more of a specialty.”

The Holocaust course Kennedy offers in Palm Beach Gardens also touches on more contemporary genocides, such as the ongoing atrocities in Darfur.

“This is one of the genocides I’m teaching [about] that’s still going on, and you can actually do something about,” she said.

In fact, last year, Kennedy’s students wrote to U.S. Ambassador to the U.N. Samantha Power, who is largely credited with sparking the Obama administration’s interest in the Darfur conflict.

Webeck, too, wants her lessons to translate to real-life actions.

“I want so badly to believe that people are good, and so many of this history [on the Holocaust and other genocides] is proof to the contrary, that they’re not. …That stings, and I want to teach and encourage the younger generations that it is possible to be good and to rebuild from horrible events, and teach in small ways to make kind choices and to be good to other humans,” she said.